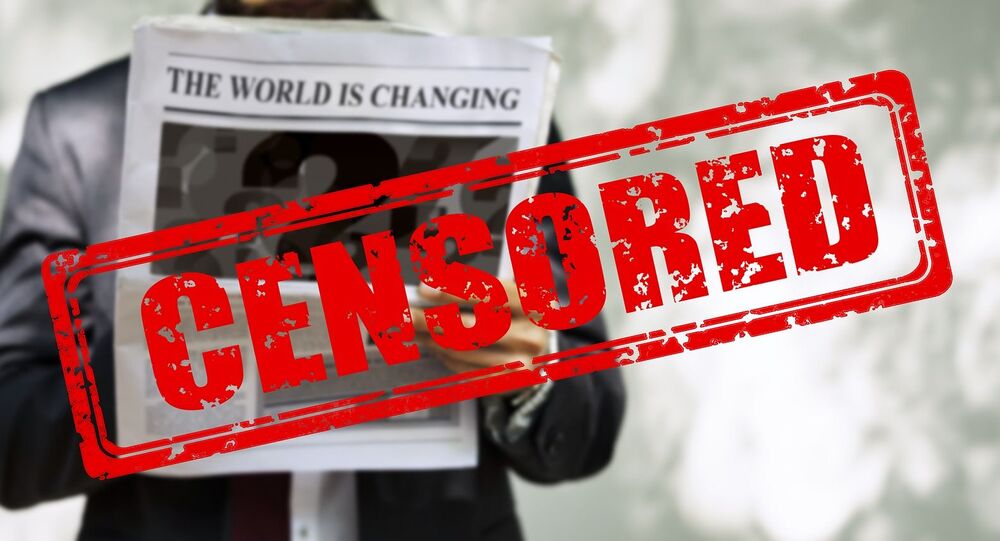 Journalist Sulome Anderson claims The Grayzone news outlet publishes ‘conspiracy theories’ and that asking Google to distinguish between different outlets is not the same as censorship.

An establishment journalist has triggered controversy, and an online debate on press freedom, by publicly requesting Google de-rank the independent news site The Grayzone. Sulome Anderson, who, according to her bio on her Twitter page, has published with news outlets such as The Washington Post, Newsweek, New York Magazine, and Foreign Policy, labelled a recent article by Grayzone contributor Rania Khalek as "dangerous". For her part, Khalek called Anderson's comments to Google a "dangerous threat to press freedom"

Khalek's article, which Anderson specifically took aim at, is part of a two-piece investigation into alleged US and Gulf states attempts to co-opt and influence the ongoing anti-corruption protests in Lebanon. Khalek writes that:

"By joining the roadblocks around Beirut, the protesters have inadvertently allowed themselves to be used by these US-allied parties. Whether they know it or not, the media-friendly artists and students at the ring road in downtown Beirut have given cover to the Lebanese Forces roadblocks in the north and the [Progressive Socialist Party] and Future Party roadblocks in the south."

Anderson lashed out against the article, calling The Grayzone a "conspiracy theorist website":

Can someone tell me why this piece on a conspiracy theorist website written by a woman who parachuted into Beirut to spread sectarian propaganda and now pretends to be native shows up on the first page of a @Google news search about the #LebanonProtests? https://t.co/YoQKRTUx8L

​She then called Khalek's piece "dangerous" and asked Google why it featured the story prominently:

.@searchliaison @dannysullivan what is the criteria for @googlenews searches? This is dangerous disinformation that could get protesters in Lebanon killed. There are clashes almost every day between people who propagate these theories and demonstrators rallying against corruption

Anderson then appeared to call for Google to censor The Grayzone:

I’m happy to explain in detail via email, with plenty of prominent expert testimony, why this oft-debunked website is an unreliable source that should not be promoted by Google News. You have a responsibility not to disseminate lies that place people at risk on your search engine

British gov/NATO-funded information warfare group the Integrity Initiative is amplifying calls for our website to be censored and removed from Google News because activists don't like our factual reporting.

Khalek: "A Threat to Press Freedom​​"

Khalek, who is based in the Lebanese capital Beirut, calls Anderson's intervention a "threat to press freedom".

She says it is:

"Outrageous for a journalist to turn to big tech companies to censor other journalists simply because they don't like the politics of an outlet or reporter.... And it is alarming that Google even bothered to respond to her complaints and smears. Censorship is never the answer. Big tech companies have way too much power as it is."

She continues saying that "big tech" should "not be looked to as arbiters of what constitutes good versus bad reporting. Moreover, there is a broader issue of tech companies working closely with western government funded think tanks, like the Atlantic Council, to determine what is fake news"

"Journalists should not contribute to this stifling of press freedom", she says "no matter how much they despise the political leanings of other reporters".

"Censorship is not the same as a asking a tech platform to review what is appropriate to feature as a reliable news source. Infowars should not be indistinguishable from the New York Times. Without those standards, anyone with a website can write whatever they want and have it featured as news, which has dangerous implications for our society. In other words, you're free to publish whatever you want online, and tech platforms are free to screen what they feature".

Anderson said that while she wouldn't "comment on whatever work Grayzone does":

"outlets which have been reliably debunked time and time again should probably be reviewed before being featured as reliable news sources on the world's largest search engine."

Khalek: "No Proof That Anyone Was Endangered"

Khalek hits back against Anderson's claims her reporting was "dangerous".

"The claim that my factual reporting endangers people's lives is a cynical attempt to discredit my journalism, which is nuanced and based on two months of on the ground interviews and observations about political developments of the protests. Journalism is about telling the truth, even if it is inconvenient," she says.

She argues that Anderson is merely "upset with the facts" in her article and should have 'engaged' with their "substance" rather than "turning to smears".

"There is no proof that anyone was endangered by my reporting", Khalek says. "It's a totally made up claim intended to turn people away from reading what I wrote".

In 2018 Ben Norton, an investigative journalist with The Grayzone, criticised Anderson's claims that sources informed her of an alleged Lebanese Hezbollah plot to attack the US. Award-winning journalist Aaron Maté referenced this when he hit back against Anderson:

This is insane. @SulomeAnderson -- a journalist w/ a track record that includes claiming to have discovered a Hezbollah plot to attack the US, but yet for some reason no outlet would publish it 🤔-- is calling on Google to censor @TheGrayzoneNews https://t.co/yXabNnHRkP

​Maté, whose new show on PushBack is published by The Grayzone, won the Izzy Award in April 2019 for his work deconstructing, and in many cases debunking, the Russiagate narrative in the US.

The Grayzone was founded by award-winning investigative journalist Max Blumenthal. It is known for taking aim, in particular, at western states's involvement in conflicts and coups around the world. The outlet did not respond to a request for comment by the time of publication.

Mohamed Elmaazi has also contributed to The Grayzone.