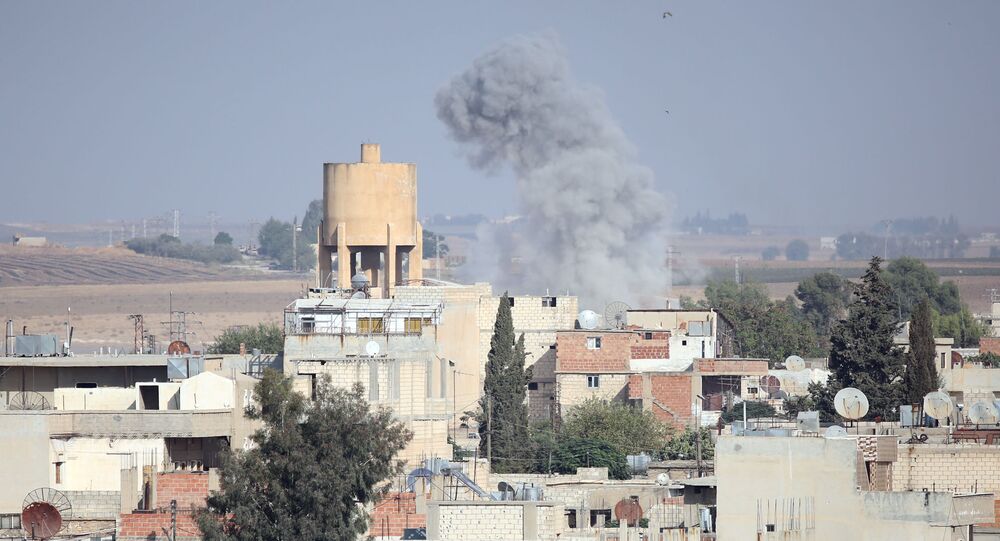 ANKARA (Sputnik) - Turkish President Tayyip Erdogan said on Sunday that Russia and the United States failed to fulfill their obligations to Ankara on the withdrawal of the Kurdish People's Protection Units (YPG) from the security zone in northern Syria, and Turkey will do it on its own.

"Neither America nor Russia were able to clear the region from the YPG, although the promises made to us were about that. Since they have not succeeded, it is up to us now. We will do what needs to be done then. The local tribes are asking us for help", Erdogan told the Turkish A Haber TV channel.

The Turkish president stated on Saturday that Turkish forces won't leave Syrian territory until the people of the country ask Ankara to withdraw.

On 9 October, Turkey launched Operation Peace Spring in northeastern Syria to clear the area of Kurdish militants and Daesh* terrorists. The operation allowed Ankara to create a safe zone on a 120-kilometre (75-mile) stretch of land between the Syrian towns of Ras al-Ayn and Tal Abyad, in order to resettle Syrian refugees there, according to the Turkish government.

Efforts continue for a permanent solution to the electricity and water problem in the Operation Peace Spring area. While transformer stations are being repaired, generators receiving electricity enable the functioning of many water wells.https://t.co/i7rVnmfPUx pic.twitter.com/OlXVyvOdu5

The United States and Turkey came to an agreement on 17 October for a 120-hour ceasefire in the area to allow the withdrawal of the Kurdish fighters.

As the five-day ceasefire came to an end, Turkey and Russia reached a deal that would see the Kurdish fighters pull back from the Syrian border area with Turkey. In addition, Moscow and Ankara have begun joint patrols in the operation zone along the Turkish border.