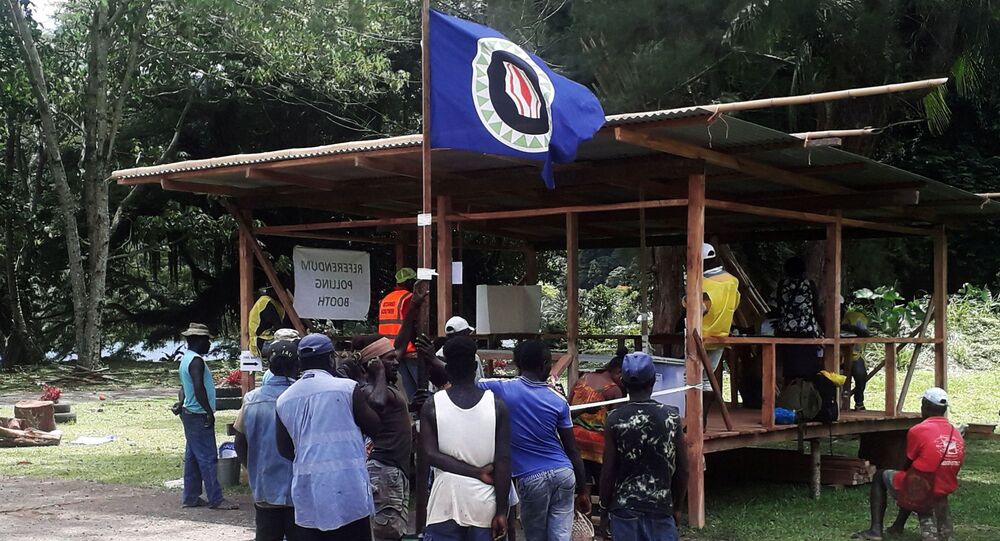 As Bougainville Set to Become Independent, How Have the World’s Newest Nation States Fared?

The majority of the residents of Bougainville voted in favour of independence in the referendum on the island, prompting Sputnik to look at the nation states which have only come into being in the last 40 years.

More than 180,000 residents of Bougainville and neighbouring Buka voted in a referendum between 23 November and 7 December on whether they should become independent of Papua New Guinea. Around 98 percent of voters backed independence; they had two ballot options - more autonomy or full independence.

The islands, named after an 18th century French explorer, were owned by Germany and Australia during the 20th century but in 1975 they became part of the newly independent Papua New Guinea.

But between 1980 and 1998 the Bougainville Revolutionary Army fought a guerrilla war for independence, which was ended by a peace agreement in 2001, which included a stipulation that there would be a referendum on going it alone within 20 years.

Yesterday my father cast his vote in the #Bougainville referendum. I lost 2 brothers during the crisis, and like countless others, reflect on the legacy of the conflict everyday. May we have a lasting peace. pic.twitter.com/OYzCzKNL7p

​The referendum is non-binding but the overwhelming vote in favour will make it hard for Papua New Guinea not to allow the Bougainvilleans to go it alone, becoming the latest in a long line of new nations.

Just down the road from Bougainville is East Timor, which was a Portuguese colony for four centuries.

In 1975, a year after the Carnation Revolution, the Portuguese prepared to leave but nine days after East Timor declared independence it was invaded by neighbouring Indonesia, which controlled the western half of the island, a former Dutch colony.

The brutal Indonesian regime, under President Suharto, flooded East Timor with settlers and 200,000 Timorese died due to fighting, famine and disease.

Let's go, Timor Leste! Timor Leste has yet to win a medal in #SEAGames2019 and Filipino netizens are cheering them up on Twitter! #WeWinAsOne pic.twitter.com/Bec6oTlxIY

​After Suharto was forced to resign in 1998, Indonesia changed its position and agreed to let East Timor vote on whether to become independent.

The following year 78 percent of voters opted for independence, but militias comprised of settlers, backed by the military, carried out massacres and tried to resist the move towards independence.

But the years since independence saw a lot of political instability and violence, including a failed putsch in 2008 in which President Jose Ramos-Horta was shot in the stomach.

East Timor remains one of the poorest countries in the world, although there are hopes it will benefit from the development of the US$50 billion Greater Sunrise gas field, which has been held up for years by a dispute with Australia about the maritime border.

South Sudan finally seceded from Sudan and became independent in 2011 after years of fighting.

Sudan - one of Africa’s biggest countries - had always been running by the Muslim Arab inhabitants of the north and central two-thirds of the country, centred around the capital Khartoum.

When the photo was taken she didn't have a name.
She was just a few hours old and for a brief moment...
She held the tragic title of South Sudan's youngest refugee.⁣ 💔
⁣
She's not alone: over 2.2 million have sought refuge in neighboring countries. pic.twitter.com/tSGsQrJlaR

​In the south, the people were largely Christian or animist and from a variety of African tribes.

They had little in common with the Sudanese and the Sudan People’s Liberation Army (SPLA), led by John Garang, fought a long and bitter war from 1983 until 2005.

Tragically, only weeks after a peace agreement had been signed Garang died in a helicopter crash.

Kiir’s supporters came from the Dinka tribe while Machar drew support from the Nuer people.

Tens of thousands have been killed and hundreds of women raped since 2013, during the conflict between Kiir’s forces and those of Machar.

Eritrea has always been a distinct region, linguistically and culturally separate from its big brother, Ethiopia, next door.

Mussolini conquered it in the 1930s, along with Ethiopia (then known as Abyssinia), and after the Second World War it was briefly independent before being annexed by Addis Ababa in 1962.

For the next three decades the Eritrean People's Liberation Front, led by Isaias Afwerki, fought the Ethiopians, despite the occupying army having the latest tanks and jets supplied by the Soviet Union.

Enough pain, enough suffering; #Eritrea2020 must be the time we elevate ourselves from the shackles of dictatorship, the indignity of repression & the misery of exile.#Eritrea pic.twitter.com/4tHz5kKgtn

​When the Soviet Union collapsed and Russian support dwindled in the early 1990s, the Ethiopian military collapsed and the EPLF and their allies in the Tigray People’s Liberation Front marched on Addis Ababa and forced Colonel Mengistu Haile Mariam into exile in Zimbabwe.

Eritrea became independent in 1993 but soon fell out with the Tigrayan-dominated Ethiopian government and fought two inconclusive wars over the disputed Badme border region.

Dahlak is the most beautiful and unspoiled island located in #Eritrea. pic.twitter.com/fT9I1ZPyaU

​Afwerki has ruled Eritrea since 1993 without ever holding elections and his authoritarian rule and awful living conditions has driven thousands of Eritreans into exile, many of whom have become migrants in Europe, or drowned in the Mediterranean while trying to reach Italy or Greece.

One of the least well known of the new nations is Palau, which is an archipelago of 200 volcanic islands in the Pacific Ocean.

It was administered by the United States for 47 years but was granted independence in 1994.

6-inch casings litter the deck of the USS Miami (CL-89) after it shelled the Palau Islands on September 7, 1944.#History #WWII pic.twitter.com/XMq3eDAfGF

​The jungle atolls, surrounded by coral reefs, attract tourists but not enough to allow Palau to break even and in 2010 Washington granted US$250 million in aid, on condition that they can maintain military bases in Palau.

In Europe there were a string of independent nations born out of the former Yugoslavia in the 1990s - Slovenia, Croatia, Bosnia-Herzegovina and the Former Yugoslav Republic of Macedonia (Fyrom), which was renamed North Macedonia earlier this year to overcome Greek objections.

Yugoslavia, under Slobodan Milosevic, soldiered on until 2003 when it was rebranded as Serbia-Montenegro but continued to claim Kosovo, a historically Serbian region which now has a largely Albanian population.

My hometown under a blanket of snow yesterday.❄️ #Prizren #Kosovo pic.twitter.com/I0WCYwzCoj

Kosovo declared independence in 2008 and was recognised by the United States and many European nations but not Serbia, although it has normalised relations since the 2013 Brussels Agreement.

Only last month Kosovo played England in Pristina in a Euro 2020 qualifier which was won 4-0 by the visitors.

There are of course several “nations” still waiting to be granted independence by the powers that be.

They include Kurdistan - a region which spreads across Turkey, Iraq, Iran and Syria. The Kurds have their own autonomous region in northern Iraq and, until the US betrayal earlier this year, controlled a large swathe of north-east Syria.

​But they have been unable to persuade the US, the European Union, Russia or China to back their aspirations to be a fully fledged state.

Catalonia sought to break away from Spain last year but Madrid cracked down brutally, locking up independence leaders and cancelling the result of a referendum.

Unlike the Basques - who fought a long terrorist war - the Catalans have shown no signs of resorting to violence in an attempt to win independence.

During a protest in Gaza, Palestine.
The sign reads: “What else is left? My homeland and future are gone, and Layla got married.” pic.twitter.com/7nh4wMjcB1

​Palestine declared independence as far back as 1988 but it has never been recognised by the United States, Australia or most European countries and Israel continues to occupy most of the West Bank.

Finally spare a thought for the Western Sahara.

Over 30 years of peaceful campaigning for the independence of her homeland from Morrocco, Aminatou Haidar is dubbed as “the Gandhi of the Western Sahara.” So who is @AminatouHaidar ? pic.twitter.com/bBoZVt6PSO

​This huge but largely empty slice of desert on the north-west coast of Africa remains in limbo.

A former Spanish colony, it was occupied by Morocco in 1975. The Polisario Front guerrillas fought a long war in a bid to gain independence but it ended with a ceasefire and an uneasy truce.

Morocco rules the coast, including the capital El Aaiun, while the Polisario Front retain a strip of territory in the east and thousands of Sahrawi refugees live in camps in neighbouring Algeria.