The new sanctions come less than a day after Iran's foreign ministry issued a travel advisory urging Iranian nationals not to visit the United States, given what it described as America's "cruel and one-sided laws toward Iranians," and the danger of "arbitrary and lengthy detention in completely inhumane conditions."

In a press statement, the Treasury said that Iranian businessman Abdolhossein Khedri and his shipping companies including Khedri Jahan Darya Co and Maritime Silk Road LLC were being designated over their alleged support for the Islamic Revolutionary Guard Corps Quds Force's "smuggling operations."

"Khedri is being designated pursuant E.O. 13224 for having materially assisted, sponsored, or provided financial, material, or technological support for, or goods or serviced to or in support of, the IRGC-QF," the statement said.

Secretary of State Mike Pompeo confirmed Wednesday that the other designated entities include Iranian transportation companies Mahan Air and Islamic Republic of Iran Shipping Lines, given their alleged role in the proliferation of weapons of mass destruction. The designation also includes Shanghai-based shipping company E-Sail. The designations will take effect 180 days from today.

"As long as [Iran's] malign behaviour continues, so will our campaign of maximum pressure. Today I'm announcing the designation of three Iranian transportation companies that helped Iran import items for its weapons of mass destruction programmes," Pompeo said, speaking at a press conference in Washington, DC.

Pompeo warned that the designations "put the world on notice," and that countries or companies that engage in business with the designated entities risk exposure to US secondary sanctions.

In his comments, Pompeo also reiterated the State Department's advisory against travel to Iran, saying there were "massive risks associated" with doing so. "The State Department has previously issued a Level 4 travel advisory for that country. It's our highest threat level. Americans and particularly dual national Iranian Americans traveling to Iran face a very high risk of kidnapping, arrest and detention," he said.

The Trump administration introduced a campaign of 'maximum pressure' against Iran in mid-2018, after unilaterally withdrawing from the 2015 Iran nuclear deal. In addition to sanctions against Iranian individuals and companies, US restrictions have targetted the Islamic Republic's energy and banking sectors, with Trump administration officials previously saying that US aims include bringing Iran's oil exports down "to zero."

In May 2019, on the one year anniversary of the US withdrawal from the nuclear deal, Iran announced that it would begin gradually reducing its own commitments under the treaty until its European signatories (the UK, France, Germany and the European Union) began to live up to their commitments to preserve the treaty and bypass US sanctions pressure. Tehran's actions have included increasing its production of enriched uranium.

At the same time, Iranian officials have insisted that Tehran has no intention of pursuing nuclear weapons, since this runs counter to the country's Islamic faith. Iran's current enrichment levels of five percent, above the nuclear deal's limit of 3.67 percent, remain well below the 'weapons grade' u-235 enrichment requirements of 85 percent or above. 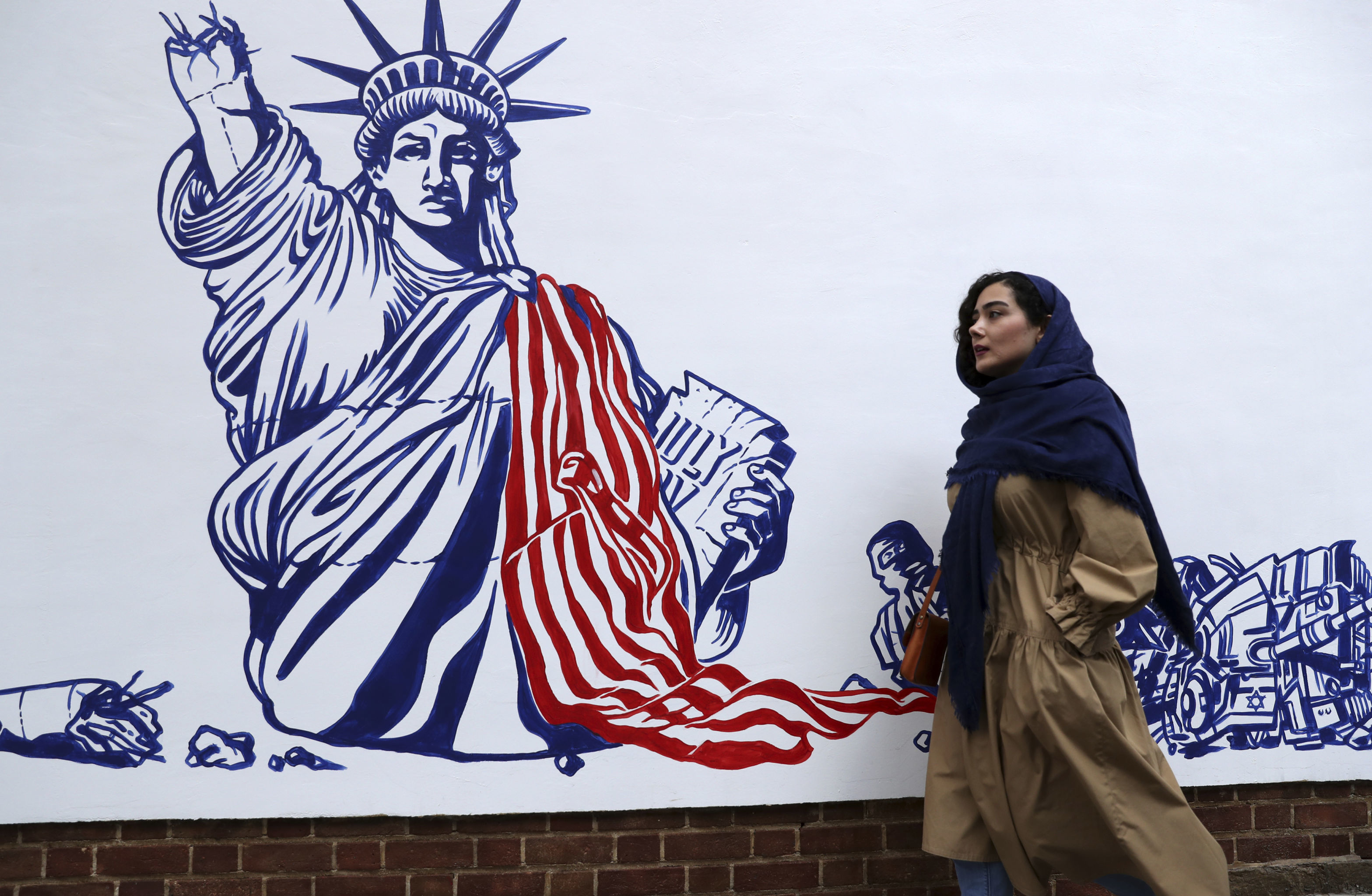 Vahid Salemi
A woman walks past a satirical drawing of the Statue of Liberty after new anti-U.S. murals on the walls of former U.S. embassy unveiled in a ceremony in Tehran, Iran, Saturday, Nov. 2, 2019.

On Tuesday, the Iranian Foreign Ministry issued a travel advisory warning Iranian nationals against visiting the United States, "even if they have an invitation," citing the alleged danger of "arbitrary and lengthy detention in completely inhumane conditions."

Over the weekend, Iran and the US carried out a prisoner swap, in which US-held Iranian scientist Massoud Sleimani, who was detained in the US in 2018 following his alleged effort to smuggle biological materials to the US, was exchanged for US national Xiyue Wang, who was convicted of espionage and sentenced to 10 years in prison in Iran in 2017. Following the exchange, Iranian Foreign Minister Mohammad Javad Zarif indicated that Iran would be prepared for a "comprehensive prisoner exchange" with the US, provided US willingness to do so.