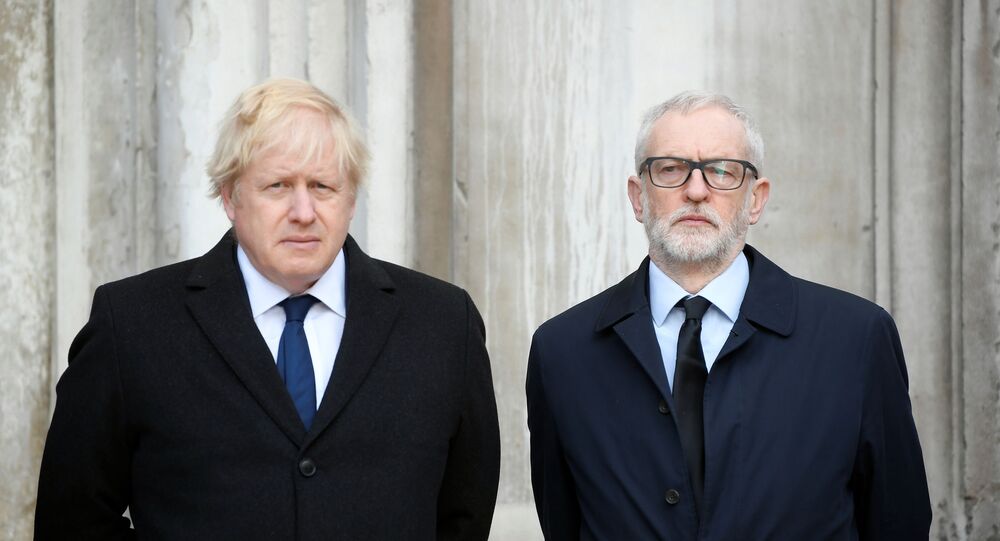 Johnson, Corbyn or Another Hung Parliament? A Look at Three Possible Outcomes of UK Vote

Opinion polls still have the Conservatives comfortably ahead of Labour before Thursday’s General Election. But polls have been known to get it wrong. Sputnik looks at three possible outcomes.

The Conservatives need to win 326 seats to get an outright majority and “get Brexit done”.

When Parliament was dissolved on 6 November the Tories had 298 MPs, having lost 20 rebels in the last stages of the debate over Brexit.

The Tories are also forecast to lose all their seats in Scotland, mostly to the SNP.

​So in order to gain a majority the Conservatives need to win back those seats - like Beaconsfield and South West Hertfordshire where former Tories Dominic Grieve and David Gauke are standing as independents - and then win about 20 seats from Labour in England and Wales.

It is highly likely the Tories will actually lose some seats in London and the South East - Putney, Chipping Barnet, Southampton Itchen and Hastings & Rye - but they could more than compensate for those losses by winning in Leave-leaning Labour constituencies such as Dudley North, Ashfield, and Bishop Auckland.

​If the Tories gain a majority, Jeremy Corbyn would have failed to win two general elections and would have no option but to resign.

Even his closest ally, Shadow Chancellor John McDonnell, admitted last month that Corbyn would have no choice but to resign.

So Labour would spend Christmas and the best part of January deciding on a new leader.

Martin Cunningham*, a Labour councillor, told Sputnik: “The most electable leader is Keir Starmer but the Left will probably go for Rebecca Long-Bailey, who just isn’t up to it.”

If Labour had a proper leader, they would win this election hands down. The amount of disillusioned voters terrify me, I’m a liberal voter and want to remain but I can understand why people wouldn’t vote for them. Dreading next Friday and what our future holds

​Starmer and Long-Bailey will probably be joined in the leadership contest by Angela Rayner and perhaps even Hilary Benn would put his head above the parapet to represent the centrist wing of the Labour Party.

But Corbynistas, who still dominate the membership of the Labour Party, have never forgiven Benn for his attempted coup against Corbyn in the wake of the 2016 Brexit referendum and will probably opt for Long-Bailey or possibly Laura Pidcock.

The pollsters got it completely wrong in 2017 when they predicted that Theresa May - whose campaign was based on her mantra of “strong and stable” government - would win easily.

Could they have got it wrong this year, too?

If Corbyn and the Labour Party perform better than expected he could gain a majority and become the next Prime Minister.

​Labour started out with only 243 MPs and even if it wins back the seats where moderates quit or were deselected - for example Streatham, Birkenhead, Ilford North, and Enfield North - it will still need another 80 gains from the Tories, Lib Dems or SNP to get back in government.

In the past Labour could have guaranteed on Scotland - in 2005 it had 46 Labour MPs. But by 2015 that was down to one - Ian Murray in Edinburgh South.

So in order to win a majority Labour will not only have to pull off a miracle in Scotland but also win over large numbers of Tory voters in the Midlands, East Anglia and the South of England.

But let’s assume Corbyn does it.

​Boris Johnson would be forced to resign and his tenure as prime minister would go down as one of the shortest in history.

Johnson has been prime minister for 137 days - only 19th century Tory prime minister George Canning (119 days) can beat that, and his term was ended by his death at the age of 57.

So if Johnson goes the Tory party might tear itself apart as the Remain and hard Brexiteer wings go to war, but more likely it will rally around a more moderate figure, such as Sajid Javid, Matt Hancock or possibly even James Cleverly.

It will need quite a significant shift to get either the Conservatives or Labour a workable majority.

So what about the third option - another hung parliament.

We can’t afford another chaotic hung parliament – with Jeremy Corbyn in charge of nothing except more arguments.

So let’s get Brexit done. Let’s get on with the country’s priorities and unleash the potential of the whole of the UK.

​It would be the nightmare scenario for many people in Britain, who have become completely fed up by the bickering in Parliament.

If the Tories have the most seats - say around 290 - and Labour has a creditable 265, Boris Johnson and Jeremy Corbyn would both seek to hold onto their positions as party leader.

If the SNP has 60 seats they would be the most obvious coalition partner but their demand for a second Scottish referendum in the next five years could be beyond the pale, especially as their MPs would continue to try and stymie Brexit, which is overwhelmingly opposed in Scotland.

So if Johnson cannot do a deal with the SNP, it would leave Corbyn clear to hammer out an agreement.

If he promised a second independence referendum and agreed to put the final Brexit deal to the public too, an Labour/SNP coalition could be created, although it would still need a couple more MPs to take it over the line - maybe one or two Greens (if they make gains) and possibly the Alliance Party or SDLP if they win Belfast South.

I'm looking for a hung Parliament and a sensible number of Independents /Greens/Libdems /SNP to moderate the extreme Politics that have crept into our two main parties. https://t.co/5IlLitJ1mK

​Jo Swinson has already said she would not join a Labour-led coalition if Corbyn is prime minister and Labour would refuse to be blackmailed into sacrificing its leader to get the Lib Dems on board.

Could Boris Johnson tempt her to once more join a Con-Dem coalition?

It seems unlikely, considering how far the two parties diverge on Brexit, and even if they did it would only give Johnson 306 seats, well short of a majority.

Martin Cunningham has chosen to use a pseudonym for the purpose of this article. The views and opinions expressed by ​Martin Cunningham are his and do not necessarily reflect those of Sputnik.