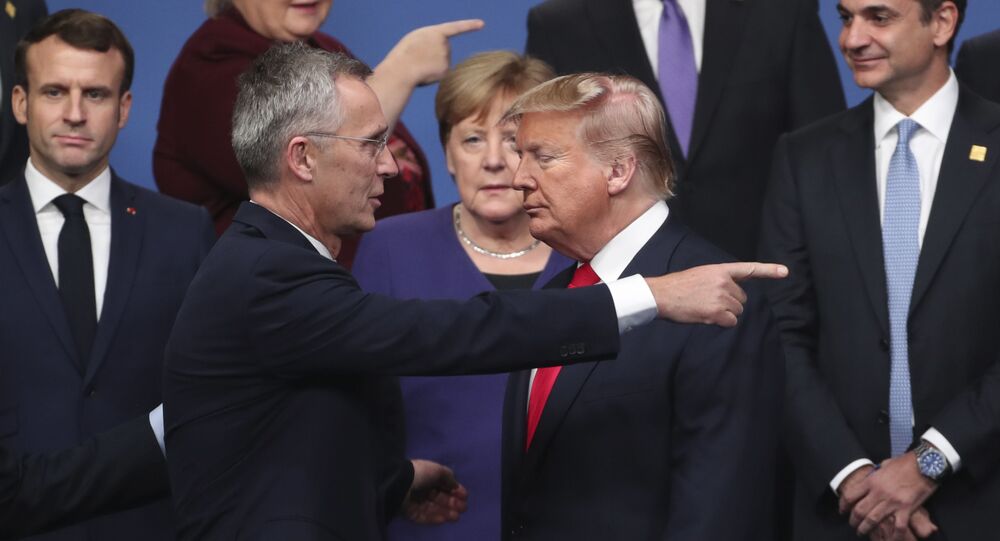 "Today, NATO exists strictly to sell weapons and to employ well-heeled bureaucrats in Brussels. And unfortunately, it cannot exist without an enemy. And that is the only reason for our hostility toward Russia", Black, who is a former NATO officer, said.

Macron said in December that not all NATO members view Russia as an enemy anymore as the situation has changed over the past 30 years.

"President Trump sees NATO principally as a lucrative market for the arms dealers. He made it clear during his campaign that he thought that NATO was a waste of time. But President Trump likes to sell weapons, there's no doubt about it," Black stated. "That's why he's trying to get Europe to increase their defense spending so that they'll purchase US weapons. But as Macron said NATO is brain dead, it has no purpose. It's interesting that Macron also said that he felt that Russia would move toward a partnership project with Europe".

In June, Macron said that he wanted to turn a new page on Europe's relationship with Russia.

"I agree with that. Russia is a European country and it's one that has much to offer and represents no threat at all, unless, and the one caveat, is if we continually prod them and something goes terribly wrong in one of these provocations and we trip trigger a nuclear war. Because Russia is very strong in nuclear power. Unfortunately, we have people who are taking very reckless acts towards Russia to provoke them so that they can continue this myth that NATO has a purpose. But it doesn't".

Black also said that France is not the only one that does not see Russia as a threat.

"If you look at it, throughout all of Europe - Germany is the industrial crown jewel of Europe. This is the industrial powerhouse of the entire continent... No country has a greater interest in military threats from Russia than Germany. Yet, Germany only has 200 tanks to defend its entire border. So, it's clear that Germany sees that Russia is not threatening in the slightest, and they're not even willing to fund more than two hundred tanks for their entire border".

German Chancellor Angela Merkel said this past November that raising military spending to two percent of the industrial output by 2031 was ambitious but realistic. Germany plans to reach the 1.5 percent goal by 2024.

"My goodness in the Syrian battle for Aleppo the terrorists used more than two hundred tanks. And yet that's what Germany has for the entire defense against Russia and anyone else who might be a threat. So, the fact is that Russia is not a threat. Russia actually is working closely with Germany to build the Nord Stream 2 pipeline. They're very interdependent. The reason that the Germans are not spending as much money as President Trump would like on defense, is because they don't see a threat and they're not going to waste money".

In a series of bilateral meetings during the NATO Summit in London, Trump kept pressing his counterparts on the need to increase their countries' military spending up to 2 percent of GDP.

"I don't think it should be enhanced. I served as an officer in NATO. I was a Lieutenant Colonel in Europe from 1981 through 1984. The NATO alliance at that time was necessary and effective. We believed at that time that the Warsaw Pact was a threat to Western Europe. However, if you move from that point in the 80s up until 1991 at the end of the Cold War when the Warsaw Pact dissolved. NATO should have been disbanded. It had no purpose whatsoever".

Black also reminded that towards the end of the Cold War, the United States promised the Soviet Union that it would not advance NATO one inch to the east as long as they would go along with German reunification.

"The Soviet Union said, fine we will not block the reunification of Germany, so they fulfilled their side of the bargain but we did not," he said. "And it was no time before we violated the agreement and we have steadily advanced and advanced until we are literally on Russia's doorstep. This is very dangerous because at the end of the Cold War we had a great distance separating NATO and Russia, and that was a very positive thing because it gave them more time to resolve misunderstandings and so forth".

Over the past few years, the Alliance has tripled the size of the NATO Response Force to around 40,000 troops, with a new 5,000-strong Spearhead Force at its core.

NATO has also deployed four multinational battlegroups to the Baltic States and Poland, increased its presence in the Black Sea region, and set up a number of small headquarters to link national and NATO forces, the NATO statement reads.

Moscow has repeatedly warned that NATO's military buildup near Russia's borders could spark a conflict, destabilise the region and lead to a global arms race.