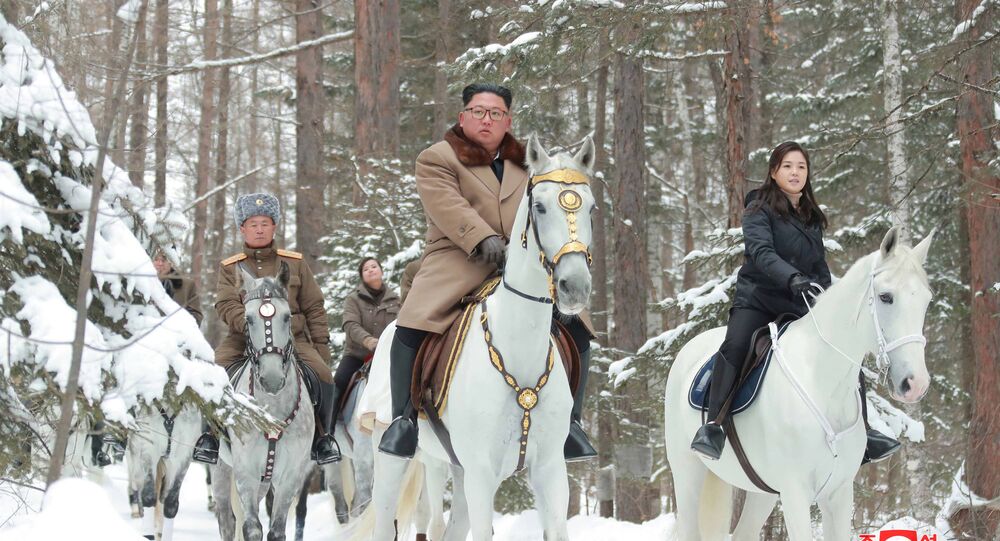 As the denuclearisation talks between the United States and North Korea seem to have hit a snag, several media outlets turned their attention toward a recent horseback stunt courtesy of DPRK head of state Kim Jong-un, wondering if Pyongyang was trying to send some kind of message.

Earlier this week, the Korean Central News Agency released a series of photos depicting Kim, along with his wife and a number of top military officers, riding on white horses on the snow-covered Mount Paektu, with AP noting that both the mountain and white horses are symbols associated with the Kim family's stewardship of North Korea.

This move comes as the end-of-the-year deadline set by Pyongyang for Washington to come up with new proposals for nuclear talks looms on the horizon, with the North Korean Foreign Ministry declaring on 3 December that it is up to the US to determine what kind of "Christmas gift" they get from DPRK.

Commenting on Kim's ride, John Delury of Seoul’s Yonsei University told Reuters that it was likely meant to signal that “the window for diplomacy is closing fast, if not already shut”.

"The message is buckle up, it’s going to be a big year for us next year", he explained. "And not a year of diplomacy and summitry, but rather of national strength".

Delury also argued that since Kim was accompanied by military officers rather than party officials, that, along with "other recent military-related announcements by state media,” might suggest that North Korea "will likely transition to a more militaristic line."

Rachel Minyoung Lee, an analyst at a website monitoring North Korea, also pointed at the upcoming plenum of the Central Committee of the Workers’ Party of Korea, which KCNA said will take place sometime in late December, with Lee arguing that this timing seems somewhat unusual.

"That Pyongyang is opting to hold this meeting before the end of the year indicates its strong resolve. Taking the party plenum announcement and the Mount Paektu visit together, the ‘resolve’ seems to be that North Korea will not cave in to the US, and that it will keep charging on despite the difficulties," she said.

Washington and Pyongyang engaged in several rounds of talks since 2018, in a bid to facilitate the complete denuclearisation of the Korean Peninsula in exchange for the freezing of US-South Korean military drills and the potential removal of US sanctions.

After the talks stalled this year, North Korea gave Washington until the end of 2019 to come up with mutually acceptable proposals and change its “hostile policy” towards the North, warning that Pyongyang may otherwise resume its nuclear and long-range missile tests.