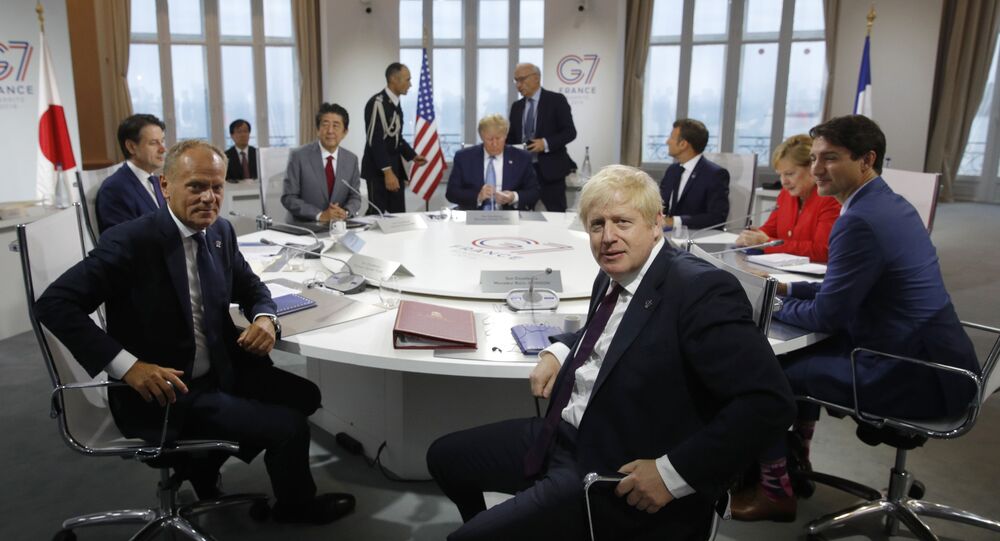 A two-day NATO summit marking the 70th anniversary of the military alliance is underway in London as heads of state and government meet to focus on geopolitical issues amid deep fractures between members of the bloc.

In the footage, first shared by the Canadian Broadcasting Corporation, the three world leaders seem to be discussing why the French President was late, in front of Princess Anne who appears to be in the discussion but it is unclear if or how she responds.

None of the men mention Trump by name, but Trudeau seems to be referring to the US president's talks with the media throughout Tuesday as a reason for his own tardiness.

“Is that why you were late?”

Canadian Prime Minister Trudeau takes a swig from his drink, and responds:

“'He was late because he takes a 40 minute press conference off the top.”

The video then cuts to a later clip, which is without context, where Trudeau adds:

“You just watched his team's jaws drop to the floor.”

He then motions as if his jaw is dropping. It is not known if Trump is the focus of that comment as the video has been edited.

Donald Trump spoke at length to reporters after a tension-laden press conference with Emmanuel Macron, in the wake of an earlier conversation after a sit-down with NATO president Jens Stoltenberg.

The president earlier took a dig at Macron over France and other European nations showing reluctance in accepting nationals from their own countries who joined the fight alongside Daesh* terrorists.

Trump turned to his counterpart and asked:

“Would you like some nice ISIS fighters? I could give them to you.”

Earlier in the day Trump had blasted Macron for previous comments made in an interview that NATO was suffering 'brain death'.

“You just can't go around making statements like that against NATO. It's very disrespectful,” Trump said at the start of the summit.

Trump also ripped into the French economy as he referenced new tariff escalations being recommended by US trade representative Robert Lighthizer on Monday.

They include new tariffs on French champagne, wine, cheese, and other products totalling $2.4 billion, in a growing trade spat with Paris.

During a separate meeting with Canada’s Prime Minister Justin Trudeau, Trump called Canada “slightly delinquent” as he typically chided other nations for paying less than a 2 per cent of GDP commitment on defence.

The North Atlantic Treaty Organization leaders’ summit, marking the 70th anniversary of the alliance, continues on Wednesday in London.

Heads of states and military leaders of the NATO member states are expected to adopt a final communique at the end of the event, that will reflect the bloc’s position on the key issues of the regional and international agenda.

Is NATO Still Relevant or Becoming a Tool to Seek Out New Enemies?

China in the Crosshairs as NATO Leaders Meet in the UK