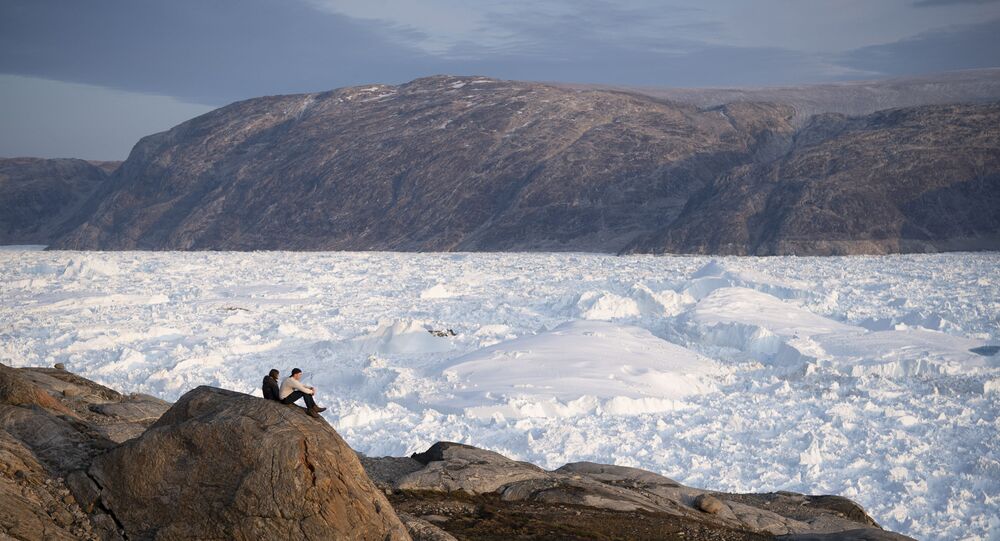 US President Donald Trump surprised Denmark this August by suggesting that Washington could buy the semi-autonomous and subsidised territory from the kingdom. The latter, however, firmly declined POTUS' offer.

The latest risk assessment report by Denmark's Defence Intelligence Service has showed a drastic change in the country's security priorities, with the kingdom's Greenland territory considered to be at greater risk than anything else, putting the defence of the region above measures to counter terrorism and cybercrime.

The shift in stance was partly linked to a recent move by the US president, who offered the country a hefty sum in exchange for the island, which is rich in significant deposits of valuable, but hard to access, resources, the BBC reported, citing the risk assessment document. Denmark responded negatively to the offer.

© AP Photo / Felipe Dana
In this photo taken late Friday, Aug. 16, 2019, homes are illuminated after the sunset in Tasiilaq, Greenland.

But this is not the only reason that Greenland was put at the top of the Danish risk list. The Intelligence Service argues that the "power game" in the Arctic region, where the island is located, has intensified in recent years. Russia, Canada, Denmark, and the US are at odds in the area, presenting their various and conflicting claims to the Arctic territories to the UN.

The US is ostensibly trying to prevent Russia's expansion in the Arctic and is mulling building military bases there to prevent this. Moscow, in turn, is not planning on stopping its exploration missions in the region, where resource deposits, including fossil fuels, are becoming increasingly available with the ice slowly retreating and drilling technologies advancing.

Reports surfaced in August 2019, saying that Trump had mulled buying Greenland's territory from the Danish government on several occasions, with his aide Larry Kudlow later confirming the rumours, noting that POTUS knows a thing or two about buying real estate. The news was not well received in Denmark, with the Danish government vehemently dismissing the notion as "absurd".

Trump, in turn, postponed his visit to the country and the planned meeting with its Prime Minister Mette Frederiksen, citing the refusal to discuss the island's sale as the reason for the sudden move.