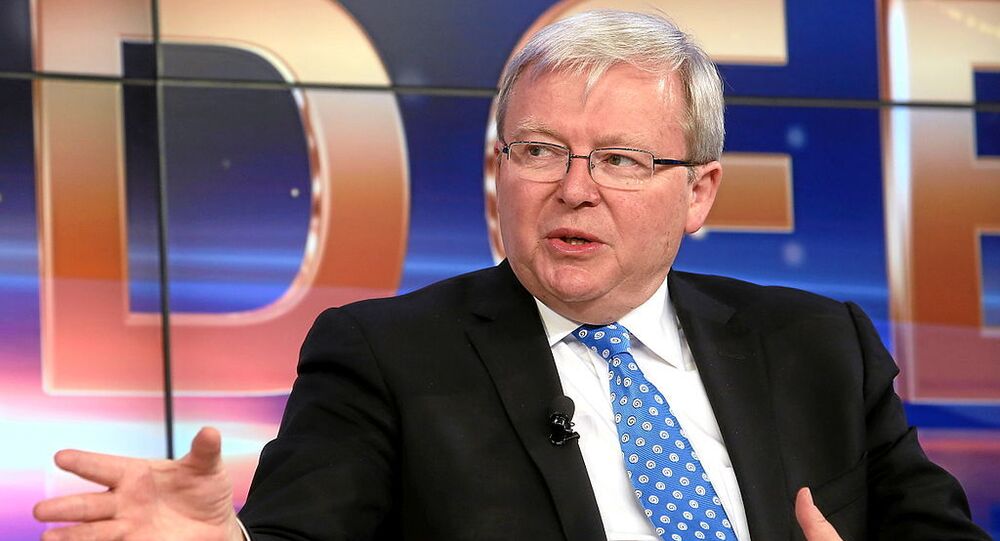 Former Australian Prime Minister Kevin Rudd blasts the "unacceptable" and "disproportionate" punishment of a "life sentence" that Julian Assange faces should he be extradited to the US. This has been described as a 'significant' intervention into the case of the WikiLeaks founder.

WikiLeaks founder Julian Assange should not be extradited to the United States, former Australian Prime Minister Kevin Rudd wrote in a letter to the Bring Julian Assange Home Queensland Network, seen by The Age and The Sydney Morning Herald. Rudd reportedly wrote that notwithstanding the "political discomfort" he experienced as a result of WikiLeaks revelations, as he himself has been the subject of prior leaks, Assange faces and "unacceptable" and "disproportionate" punishment in the US for his role in the publication of classified documents. “I would therefore oppose his extradition", added Rudd, who served as Australia’s PM from 2007 - 2010, and again in 2013.

Rudd: Why Should Assange Be Punished for What US Press Also Do?

The charges against Assange all relate to his role in publishing the Iraq War Logs and Afghan Diary, which revealed alleged war crimes and crimes against humanity perpetrated by US and allied occupation forces in Iraq and Afghanistan. Rudd's letter questioned why Assange should face prosecution and a life sentence while US news outlets, who also published much of the same classified material, are, "afforded protection under provisions of the US constitution concerning press freedom?", according to The Age. The Australian born publisher and journalist faces 175 years in a US prison, further to an 18 count indictment with 17 charges filed under the Espionage Act 1917.

"If [the US prosecutors'] case is essentially that Mr Assange broke the law by obtaining and disclosing secret information, then I struggle to see what separates him from any journalist who solicits, obtains and publishes such information", he wrote.

The former Labour Prime Minister and former Foreign Minister also wrote that while he opposed the release of classified documentation he said ultimately it is the responsibility of governments to keep their secrets.

Niki Konstantinidis, a barrister who originally qualified in Australia, told Sputnik that she welcomed this "significant" intervention by the Australian PM.

"It's good that he's speaking out now", she said, while noting that, "he could have spoken earlier". She said that to the best of her knowledge and belief Rudd was still respected in Australia and that his opinions would carry weight. She did push back against Rudd's apparent "reservations" regarding Assange's character. "For me the rest of it about his 'serious reservations', a former PM shouldn’t be talking about [Assange's] character, he should stick to facts and law", she said.

On 25 November more than 60 doctors recently wrote an open letter to the UK Home Secretary saying they worried for Assange's health and life if he is not transferred to a medical facility.

Assange remains incarcerated at the Belmarsh maximum security prison, despite completing his sentence for absconding. During Assange's last hearing Judge Vanessa Baraitser told his lawyer that she has, "no jurisdiction over the conditions over which [Assange] is held". Recent investigations have raised serious questions of conflicts of interest regarding Judge Arbuthnot, who has been overseeing Assange's cases.