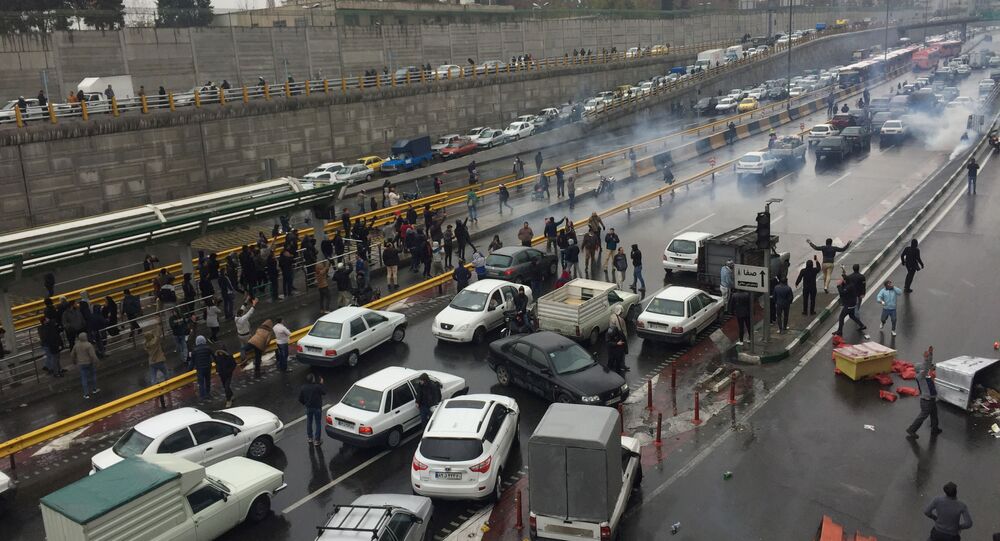 Moscow on Pompeo's Remark on 'Support' of Iranians: US Doing Everything Possible for Them to Suffer

The US secretary of state has expressed support for the protesters in Iran, who took to the streets across the country following the government's decision to raise fuel prices and introduce quotas.

Russian Foreign Ministry spokeswoman Maria Zakharova has slammed the recent comments by US Secretary of State Mike Pompeo on the Iranian protests as "hypocritical", adding that Washington is one of the reasons that the country's population is suffering from economic woes.

"[The statement by Mike Pompeo] left us puzzled since most of the things that sparked the discontent and other processes that are taking place in Iran were actually brought upon the Islamic Republic by the US’ own actions", the spokeswoman said.

Zakharova noted that Tehran’s decision to raise fuel prices, which sparked the country-wide protests, was a result of the "illegal and massive sanctions pressure" that the US is applying against Iran. She added that the Iranian population's rights to receive food, medication, and other necessities have been violated due to Washington's actions.

"The way we see it – this was the US' goal all along, when they decided to initiate the policy of sanctions pressure against Iran. It turns out that, on the one hand, Washington supports the aspirations of the Iranian people, at least verbally, and on the other hand, they are doing anything possible to make the population of this country suffer", she said.

Following reports of clashes between police and protesters in Iranian cities, US Secretary of State Mike Pompeo posted a tweet in which he claimed that the "US is with" the Iranian people. His comment was met with criticism from Iranian authorities, with the country's Foreign Ministry calling it a "curious" message amid the "pressure of America’s economic terrorism".

The protests erupted soon after the Iranian government announced a rise in fuel prices by up to 50 percent on 15 November and the introduction of quotas on gas, along with additional taxes on buying fuel in excess of the limitations. The measures are supposed to free up some cash to help low-income families as the Iranian economy suffers from the consequences of American sanctions, according to the government.