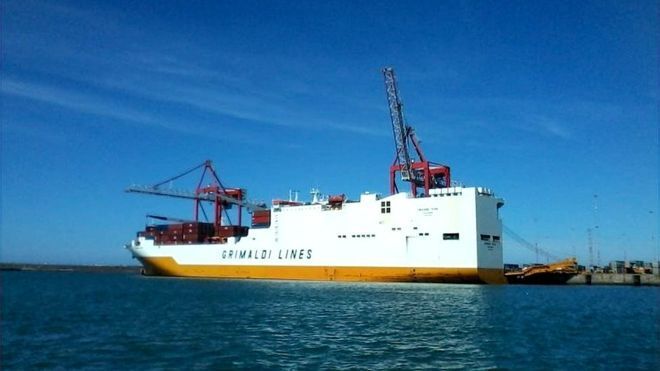 In December 2018 commandos from Britain’s Special Boat Service (SBS) were dropped onto a giant cargo ship, the Grande Tema, in the Thames estuary. The dramatic intervention ended a tense stand-off between the crew and four migrants who were threatening violence.

Four stowaways face jail after being convicted in a London court of affray but they have been cleared of the more serious charge of hijacking a ship in British waters.

Samuel Jolumi, 27, Ishola Sunday, 28, Toheeb Popoola, 27, and Joberto McGee, 20, hid themselves on board the Grande Tema before it left the port of Lagos in Nigeria on 10 December 2018.

On Thursday, 20 November, Popoola and McGee were found guilty of making threats to kill the crew.

The giant ship - which is bigger than both of Britain’s aircraft carriers - was heading for the port of Tilbury in Essex, after stopping at several other European ports.

Tilbury is only a couple of miles from Purfleet, where 39 Vietnamese illegal immigrants entered Britain only to perish in the rear of a lorry in nearby Grays last month.

Four African stowaways have been convicted of affray but cleared of the more serious charge of hijack after an incident on board the Italian cargo ship Grande Tema in the Thames estuary in Dec 2018. This is where the ship was when the incident happened. pic.twitter.com/TbZj75G6Fi

​The four men - two of whom only spoke Yoruba - ran out of food six days into the voyage and were forced to sneak out of their hiding place and go looking for something to eat in the living quarters.

They were spotted by Captain Antonio Raggi and his crew and were initially treated well and offered food and water.

But Raggi became worried about the implications when he arrived in port and he decided to lock them up in the bowels of the 78,000 tonne ship.

Five days later the men escaped and as the Grande Tema turned left out of the English Channel and headed towards Tilbury they tried to force the crew to slow the vessel and bring it close to shore so they could jump off or paddle ashore in a lifeboat.

Captain Raggi told the court he feared they might be "terrorists" from Boko Haram.

The four men - who are from Nigeria or Liberia - threw urine, faeces and their own blood at the crew, who feared they might get infected with Ebola.

One of the men shouted: “We are African, we are strong, don’t come out or we will kill you.”

The stowaways also made “cut-throat” gestures to the crew, who retreated to the bridge and locked themselves in.

The men will be sentenced on 3 January and after serving their sentence they are set to be deported back to Nigeria.

All four had denied attempting to hijack the ship, affray and 14 counts of making threats to kill.

Prosecutor Tony Badenoch QC told the Old Bailey in London the vessel, which was operated by the Grimaldi Group, was only slightly shorter in length than the Houses of Parliament.

Mr Badenoch told jurors: “As you will no doubt be aware, migrants are leaving Africa and using all manner of different routes across land and sea to reach Europe and of course the UK here in Europe….(these men) threatened to kill the crew members whilst making demands that the ship should make its way to the United Kingdom.”

The British authorities were notified and on 21 December 2018 the SBS dropped out of the darkness and onto the ship, overpowered the four men and rescued the crew.