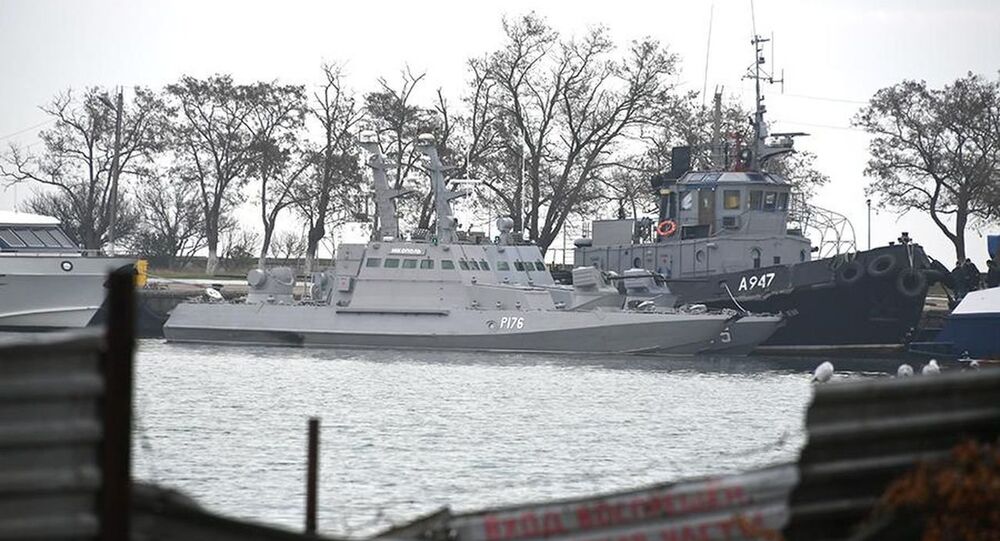 On 25 November 2018, Russia’s Federal Security Service seized three Ukrainian Navy ships after the vessels illegally entered Russian territorial waters in the Kerch Strait and proceeded to engage in dangerous manoeuvres while en route from the Black Sea to the Sea of Azov port of Mariupol.

Russia has transferred to Kiev three Ukrainian vessels it had detained during the Kerch Strait incident last year, the Russian Foreign Ministry said.

The return of the detained vessels has been possible because Moscow completed its investigation and the ships are no longer needed, the ministry added. Russia will remain committed to firmly suppress provocations at its border, the ministry's statement says.

The procedure of Russia's return of the three Ukrainian vessels, detained last November in the Kerch Strait for illegally crossing Russia's maritime border, is being completed, and the vessels will be soon hauled to Odessa, Ukrainian Navy Commander Ihor Voronchenko said on Monday.

"The acceptance and transfer is being finalized, and we are starting the haulage," Voronchenko said, as quoted by the UNN news agency.

"Yes," he said, when asked whether the vessels will be taken to Odessa.

The International Tribunal for the Law of the Sea (ITLOS) will hold the first hearings regarding the vessels on 21-22 November, Ukraine's Foreign Ministry said on Monday.

Earlier in the day, Ukraine's Deputy Foreign Minister for European Integration Olena Zerkal said that Kiev will not reject its plans to bring Russia to justice within the International Tribunal for the Law of the Sea (ITLOS) even after the return of the Ukrainian vessels.

"While Nikopol, Berdyansk and Yany Kapu are heading home, to Odessa, the Foreign Ministry team heads for The Hague, where already on Thursday the first hearings of the arbitrage tribunal in the case over violation of immunity of the three Ukrainian military vessels and their 24 crew members will be held," Zerkal wrote on Facebook, stressing that vessel transfer does not mean that Ukraine gives up on its plans.

Moscow said that it will not take part in the hearings since the ITLOS is not empowered to treat the complaint.

Russia's Decision to Return Ships Not Linked to International Tribunal

Russia's decision to return to Ukraine the vessels, detained in 2018 in the Kerch Strait for illegally crossing Russia's border, has nothing to do with the International Tribunal for the Law of the Sea (ITLOS), Kremlin spokesman Dmitry Peskov said on Monday.

"No, you know that it is not in any way related to the international tribunal, there is no link and there cannot be," Peskov told reporters, when asked why the decision has been made and whether this has anything to do with the ruling of the ITLOS.

"As for vessel transfer, you know that on board of these vessels the violation of the state border of the Russian Federation was conducted. So, our border guards and the Federal Security Service deal with this, and we ask you to address them for comment," Peskov added.

In November 2018 the Berdyansk and the Nikopol gunboats and the Yana Kapu tugboat were detained in the Kerch Strait by Russian border guards after violating Russia’s territorial waters and proceeding to engage in dangerous manoeuvres over several hours.

There were 24 military personnel, including two Ukrainian intelligence officers, onboard the vessels. They were detained but transferred back to Ukraine in September as part of a prisoner exchange programme.

Russia's President Vladimir Putin said the Kerch Strait incident was a "provocation" which had been "prepared in advance" by the then Ukrainian President Petro Poroshenko "as a pretext to introduce martial law in the country."