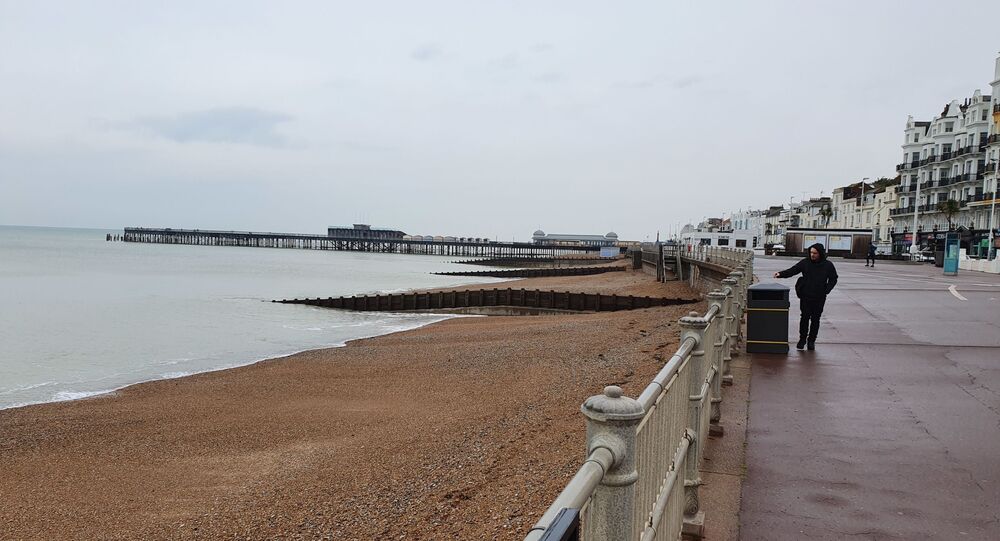 In 1066 an army from Europe landed on the beach at Hastings and defeated the English King Harold in battle. Almost 1,000 years later Europe remains a key issue going into next month’s General Election.

Three candidates in the Hastings & Rye constituency on the south coast of England think they can become the area’s next MP, replacing the former Home Secretary Amber Rudd who suddenly announced last month she would not be seeking re-election.

On 8 November the Conservatives chose Sally-Ann Hart as their new candidate - she is a councillor in the rural hinterland, lives in a quiet country lane and is married to a wealthy hedge fund manager.

One local in Hastings described her as “Amber Rudd on speed, a Brexiteer, very jolly hockey sticks, into hunting foxes, the lot.”

In 2017 Rudd beat Labour’s Peter Chowney by 346 votes and he is standing again this time, confident he can overturn the Tory majority and take the seat back.

​But the third optimistic candidate is the Liberal Democrats’ Nick Perry who is hoping to come from nowhere to win the seat.

Tremendous turnout this morning with @HastingsRyeCons!

Amazing reception at the doors, people are ready to #GetBrexitDone and move our communities priorities forward!#ToryCanvass @Conservatives pic.twitter.com/MlAKq5VqEb

Two years ago Perry, a mental health social worker, got just 1,884 votes - compared to more than 25,000 each for Rudd and Chowney - and lost his deposit.

This is the fourth time he has run for Parliament and his best showing - in 2010 when the Lib Dems under Nick Clegg were at their zenith - was 7,825 votes.

So why is he so confident this time round?

Thanks to Russell Hall for this graphic of the recent Coastal Action polling in #Hastings #Rye. pic.twitter.com/ePSV4mED35

​Perry said: “This year has been very different. We had our best European election result ever. We did extremely well in the local elections in May and won two seats which Labour were targeting and took control away from the Tories in Rother (Council). Things are changing in the constituency and that’s why I genuinely believe I can win.”

He added: “Hastings has historically been very volatile politically. In 1906 during a Liberal landslide Hastings went Tory. It’s got an unpredictable nature. It was a target for the Liberal Democrats throughout the 1990s but then in the Blair landslide a well-known local solicitor (Michael Foster) won from third place.”

But Perry’s optimism seems a little misplaced, especially considering that in the 2016 referendum 55 percent of voters here said they wanted to leave the European Union.

Perry insists the demographics have changed and a lot of people have moved to the area recently from London, fleeing high house prices and looking for a quieter life by the sea.

​Alan Bolwell, a decorator who is also the political editor of the Hastings Independent Press, says there has been an influx of Londoners but he believes Chowney will succeed Rudd.

He said: “The Labour Party are by far and away the most active here and I think they will win. Nick Perry has lost a sense of objective reality.”

Bolwell sees it as being a two-horse race between Labour and the Tories.

He says Hastings is a fairly deprived town - especially the Hollington estate but also parts of Baird and Castle wards - where the majority of voters will probably vote Labour but in the suburbs are older, more conservative voters and next door is Rye, a small town which was one of the medieval Cinque Ports.

Well done Sally-Ann & Jane! You will be a great MP for Hastings and Rye. https://t.co/63D5LKNQ2x

Bolwell said Hastings - which he referred to as “Brighton’s scruffy cousin” - has a radical history dating back centuries.

Hastings and Rye were both originally fishing ports but the industry employs only a few dozen people nowadays, although they remain feisty and naturally opposed to European Union quotas.

Prior to the 13th century Hastings had one of the best harbours on the south coast but it became silted up and eight acres was eventually reclaimed and built on.

By the 1820s there were 195 buildings, including several pubs, on this land and because it considered itself independent of the Crown and free of taxation they began flying the American flag.

Eventually the King sent in an army in 1827, knocked down all the buildings and later leased it out to a real estate developer, who rebuilt it around the new Trinity Church. But it remains known as the America Ground.

In 1914 the socialist novel, The Ragged-Trousered Philanthropists, was published three years after the death of the author, Robert Tressell.

Tressell - whose real name was Robert Noonan - was an itinerant Irish house painter who spent most of his working life in Hastings, which became the fictional town of Mugsborough in his novel.

The novel details the exploitation of the working classes but in an easy to read and humorous way and George Orwell once said it was “a book that everyone should read.”

Tressell’s characters spend a lot of their time drinking and alcohol has played a big part in the town’s history.

Bolwell jokes that Hastings is a “drinking town with a fishing problem.”

The town also has a significant drugs problem.

“Heroin is quite a big problem. Lots of young kids do party drugs and homeless people are doing heroin. Teenage pregnancies are quite high and there is high welfare dependency,” said Bolwell.

That may or may not be true but it did not go down well in Hastings, where Rudd was never popular. She had been parachuted into the seat in 2010 and defeated Michael Foster, a popular MP who was dragged down by Gordon Brown and the financial crisis.

Rudd’s ambition meant she was in the Cabinet five years later but she never had the local credentials of Foster or Chowney.

Nicholas Wilson, a financial services whistleblower who moved to the town a decade ago after being fired by a London law firm, also tips Chowney to win.

Wilson was thrown out of the Labour Party in 2017 after he stood as an independent on an “anti-corruption” platform and won 412 votes, possibly costing Chowney the election.

“It was unfortunate because I got 400-odd votes and Rudd won by 300-odd so I got abuse from Labour. But Labour are not squeaky clean when it comes to corruption. It was a good exercise and I’m glad I did it,” he said.

Wilson also points out a moment during one of the hustings when the chair told him he was going "off topic" by talking about HSBC’s links with Saudi Arabia, only moments after Amber Rudd passed the chair a note.

Wilson said three million people watched the clip on YouTube and Facebook and he said it was very damaging for Rudd.

Wilson is not standing this year but there will be another independent maverick on the ballot paper.

Paul Crosland, who is vigorously opposed to the rollout of 5G in Hastings & Rye, says he has a modest target - to get 365 votes.

In a letter to the Hastings Observer newspaper, Crosland wrote: “I don’t want to be your MP but I do want you to ‘put a cross for Crosland’.”

Liz Bygraves, from the Stop 5G Hastings Facebook group, says they have about 350 local members and she urged them to vote for Crosland unless Chowney promises to “take a stand on opposing the 5G rollout.”

Hart and Chowney were offered the opportunity to comment but were unavailable.