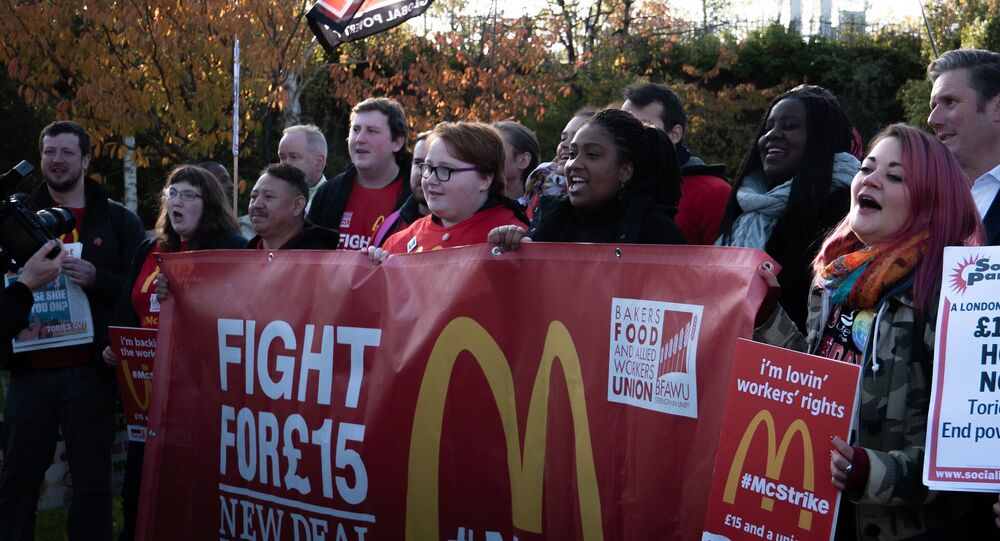 Workers from six McDonald's stores coalesced at the Wadsworth Town branch demanding better pay and an end to zeros hour contracts. A list of their demands was also delivered to Downing Street for the leaders of all the UK's political parties.

12 November 2019 saw the execution of what was expected to be the largest planned walkout of workers from the world's largest fast-food restaurant.

Fantastic energy at the #McStrike this morning. In Government, @UKLabour will give unions access to workplaces & workers, so activists like those in @McDonalds fighting for a decent living wage, can talk to their fellow workers without fear of the sack. pic.twitter.com/swJPBx9plQ

“It is inspiring and motivating to see so much support from the trade union movement, and community for our demand for a New Deal for McDonald’s workers. It’s liberating to see workers come together from different stores striking for a common cause. We are coming together to win a New Deal of £15 an hour, guaranteed hours and a union,” Lewis Baker, a McStriker from Crayford, said.

According to union representatives, it is the fourth time he has gone on strike.

In his op-ed for The Guardian, Baker expressed hope that this is the last time he has to go on strike.

"People are saying that other workers don’t get paid that much, but we say that everyone should be organising in their workplace and demanding a fair wage that they can afford to live off," Baker wrote.

Leader of the Opposition Jeremy Corbyn came out in support of the strikers:

It would take a full-time McDonald's worker over 1,500 years to earn what their ex-CEO just reportedly got paid off.

It's time for real change.#McStrike

The Trades Union Congress also put out a solidarity video in support of the strike:

Solidarity with McDonald's staff striking for fair wages, guaranteed hours and union recognition. Your fight is our fight. #McStrike pic.twitter.com/3hN4JB7uOj

The strike in the UK was part of what workers are calling a "global day of action" for fast food workers, which included people in the US, Canada, Germany, Spain, and Belgium.

Nov. 12 was a global fast-food worker day of action. Workers in cities worldwide united to take action against exploitation from the fast-food restaurant.

#McStrike yesterday at Downing Street London. UK McDonald’s workers protesting to be paid £15 per hour, get guaranteed hours each week and for Trade Union recognition. Few surplus frames from a cold and wet day of street cover. pic.twitter.com/uPX85ISmeB

An Open Letter Calling for a "New Deal" for McDonald's Workers

​The letter said, "We are mums, dads. We are daughters and sons. We are Londoners. We are workers. We work hard at McDonald’s". According to a union spokesperson it pointed out that McDonald's is "one of the richest corporations on Earth" yet they remain "underpaid" and can't afford "basic things that you need to survive".

"Many of us have gone without food. Many of us work two jobs just to survive", the letter says.

The letter called for a " New Deal" for MCDonald's workers which it listed as:

Sputnik contacted the McDonald's press office for a right of reply but no response was forthcoming by the time of publication.