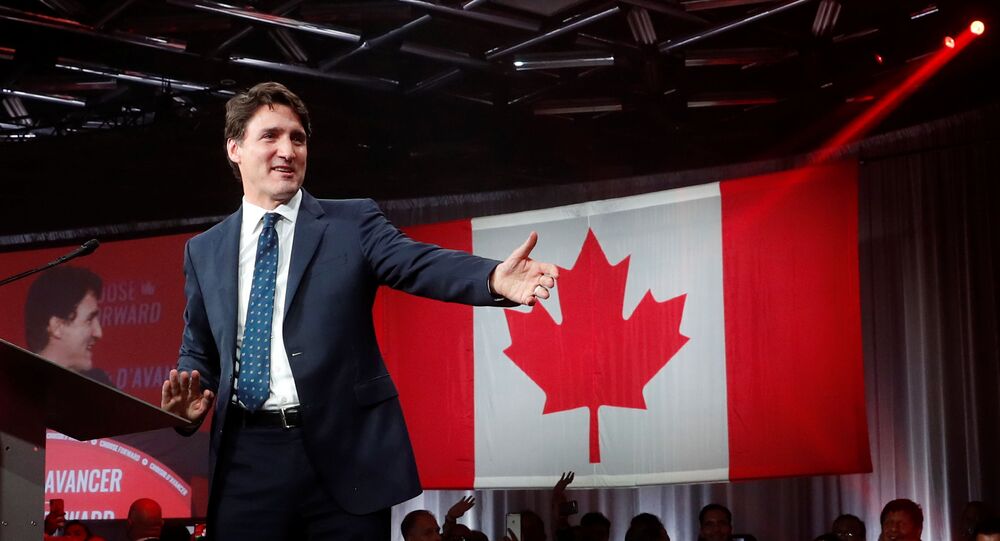 'Hypocritical Ideology': Black Conservative Gets Kicked Out of Event For 'Blackface' Trudeau Costume

Canadian PM Justin Trudeau found himself at the centre of a major scandal this September after several photos and videos of him wearing blackface and brownface many years ago were revealed to the public. Despite all the controversy, his Liberal Party still managed to win a recent federal election.

Koby Peters, an African-American student and government representative at Colorado State University, was voted out and removed from an Associated Students meeting on 30 October for wearing a Halloween costume that depicted Canadian Prime Minister Justin Trudeau wearing blackface.

Koby Peters is my HERO!!! pic.twitter.com/hVNFcnzxCi

In an interview with the outlet Campus Reform, Peters said his costume was meant to highlight the controversy surrounding the recent re-election of Justin Trudeau, who was previously spotted wearing brownface and blackface on several occasions in his early years. He was not, however, even given a chance to explain his position or irony surrounding his choice of attire, despite being black himself.

“As you can see, I cannot take off my blackface so adding on another shade, in my opinion, doesn't change anything”, Peters said in the interview.

“I was hoping there would be a lot of discussion because I chose this costume to bring out the hypocrisy that Canada re-elected Justin Trudeau on the back of the endorsement of Barack Obama so we really need to figure out whether blackface is OK or it's not OK”, he added, while noting that other members of government included white, black, and Hispanic people.

Peters also said that it was not the first time he’s experienced backlash from other university students. He’s been called a Nazi or a member of the white supremacist group KKK, as well as a race traitor. The engineering school student insisted that the backlash surrounding his choice of Halloween costume emerged mainly due to his conservative political position.

“I think it's obvious that the reason being that it's been taken so offensively is because I'm a black conservative on campus, which aren't supposed to exist”, Peters said.

“The fact that I was voted out immediately just shows how hypocritical a certain side of the ideology is”, the student concluded.

Seriously????? After having a Black Face incident we have a SENATE member wear Black Face at a Halloween themed meeting YOURE JOKING RIGHT??? pic.twitter.com/s6kRS4h2k3

​Senator from the Associated Students of Colorado State University Alejandro Benitez who was the one to call a motion in order to kick Peters out of the session insisted that Peters’ actions violated the organisation’s stance on diversity and inclusion. CSU College of Engineering Dean David McLean also sent out a letter, as cited by The Collegian, praising members of the student government for removing Peters from the session, without mentioning the student’s racial background.

“As a community, we in the College of Engineering abhor racism and bias, and we unequivocally condemn blackface. There is no place for hate in our college or at the university. This behaviour does not reflect our values and our Principles of Community of Inclusion, Integrity, Respect, Service and Social Justice”, McLean reportedly said in the letter.

Peters, whose position at the Associated Students of Colorado State University still remains unclear following the incident, said that he hoped that other Black conservatives would reach out to him in order to debate different stances on ideology, because he felt that the response to the situation from people who claim to support inclusiveness had  been hypocritical so far.

© REUTERS / SHANNON VANRAES
Trudeau Cannot Guarantee There Won’t Be More Blackface Photos of Him
Canadian Prime Minister Justin Trudeau, who has historically been a strong champion of diversity and political correctness throughout his career, has been mired in controversy since the release of a photo of him wearing brownface makeup at a 2001 Arabian Nights-themed event at the private school where he was teaching, as well as several other photos and videos of him wearing blackface masks, often considered offensive and even racially charged. Despite the scandal, his Liberal Party of Canada still managed to secure enough seats to keep Trudeau in power for the next 4-year term, but failed to form a majority.
...
Reddit
Google+
Blogger
Pinterest
StumbleUpon
Telegram
WhatsApp
49
Tags:
Blackface, Canada, United States
Community standardsDiscussion
Comment via SputnikComment via Facebook