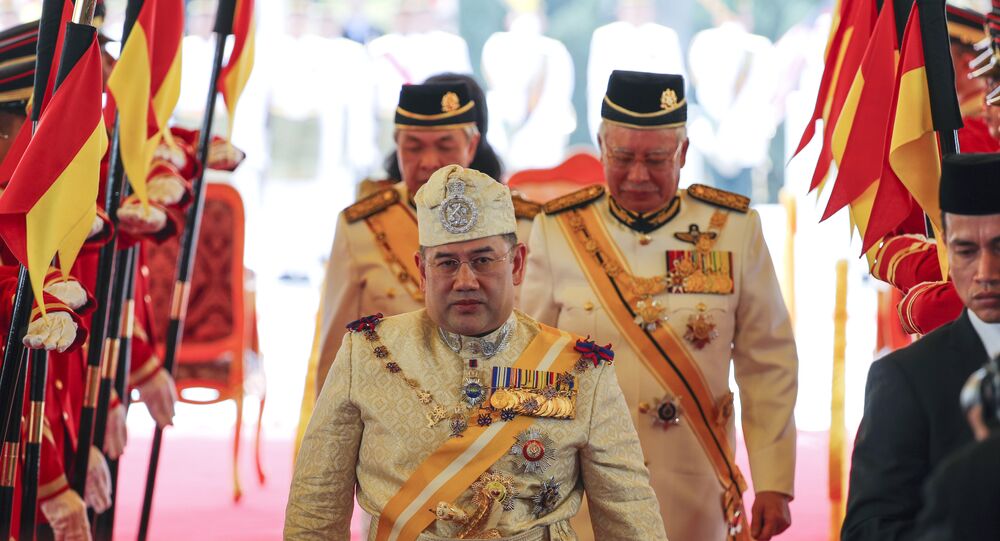 The former ruler of Malaysia insists his ex-wife wants to use their failed marriage to gain fame and celebrity status and is publicly blasting her for making their marriage public without his consent. The former king denies that he abdicated the throne because of the marriage scandal.

Sultan Muhammad V of Kelantan, the head of Malaysia’s Kelantan sultanate and former King (Yang di-Pertuan Agong) of Malaysia has rebuked claims made by his former wife, Russian-born Oksana Voevodina, whom he married and later parted with last year that he fathered her son, the Daily Mail reported Monday.

In a harsh statement delivered by a palace source who spoke to the Daily Mail, the sultan said photos of Voevodina’s 5-month-old son do not prove that he is the father of the baby and the infant could be “the son of any Asian man".

The Sultan “does not feel (the baby) looks like him", a palace source told the Daily Mail, adding that the sultan says her claims that the baby was planned and that he cried with happiness upon discovering she was pregnant are “absolute nonsense".

​Marrying Voevodina was “the biggest mistake of his life", the source suggested.

“[The sultan] mentioned that he had never met a woman as evil and vindictive as Oksana and that she showed her true colours at her wedding reception in Russia where she invited him to attend, lying to him it was a small family affair", the source said, according to the Daily Mail.

According to the report, the king wanted to keep their wedding a secret, and the Moscow reception, which he said Oksana turned into what he described as a “showbiz event” took him by surprise.

Voevodina released pictures and footage of the reception to the press, revealing to the world and conservative Malaysians that the king had married a Russian beauty queen – a fact the king would have preferred not be known, the source said.

“[The sultan] said she’s trying to make the best out of the situation using his royal status and using his last name to gain a celebrity status which she obviously desired since she entered the tacky reality show and Miss Moscow 2015", the source said, declaring that “[Voevodina] has no dignity” after footage of her allegedly “having sex” in a swimming pool on a TV reality show some six years ago emerged earlier this year.

In his public message to Voevodina, the sultan said “she should stop making a fool out of herself and move on as well and find herself a new husband".

“This marriage was a huge mistake in his personal life that should have never happened, but he said this was a lesson he had learned", the source said, adding that the sultan now plans to have “an heir and children with a woman he loves".

In June 2018, the two married in a secret Islamic ceremony in Kelantan. In November, the two had a wedding reception in Moscow, by which time Voevodina was already pregnant with a son who was born in May 2019, according to the Daily Mail.

And here are the happy couple. According to online reports his 25-year-old wife is a former beauty queen, Oksana Voevodina, who held the title of Miss Moscow in 2015. What could possibly go wrong? 🤷‍♂️ pic.twitter.com/FYFBqxwXh6

​Just one month after the wedding reception, the two parted ways. In January, Muhammad abdicated the  Malaysian throne – an elected position of constitutional monarch, in which he had served since 2016. The reason behind the move, a first in Malaysian history, has not yet been revealed. The palace source strongly denied the abdication occurred because the King’s marriage was made public, the Daily Mail report remarks.

Muhammad will retain his title as the Sultan of Kelantan and now “wants to focus on working hard and helping people in his state to continue his father's legacy and creating his own happy family", the source told the Daily Mail.