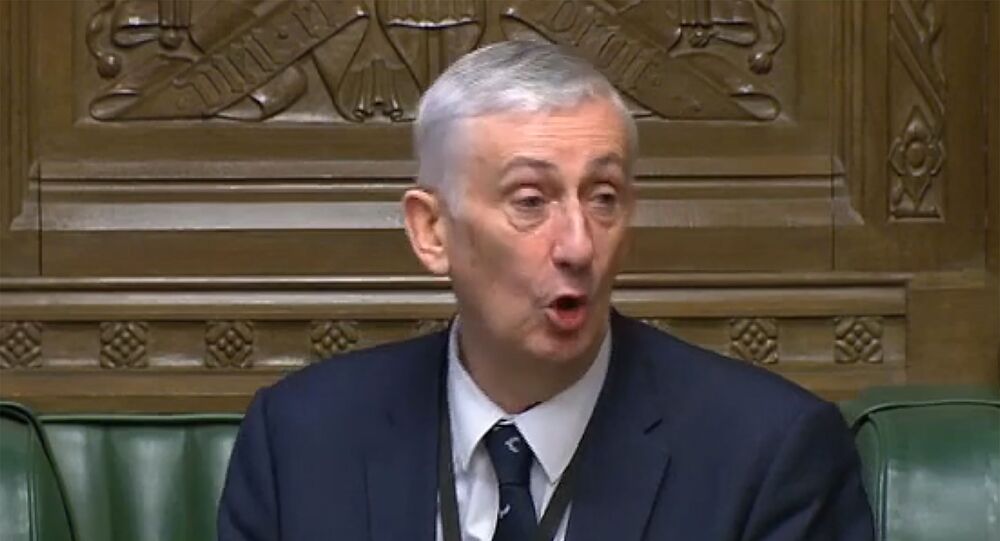 Parliament is breaking up this week, with 50 MPs retiring or resigning and the remainder going off to campaign for next month’s General Election. When they come back John Bercow will no longer be in the Speaker’s chair.

MPs have elected Sir Lindsay Hoyle to be the new Speaker of Parliament, replacing the eccentric John Bercow who was criticised by many for being an attention-seeker and for his perceived bias towards the Remainer cause.

MPs have voted in favour of @LindsayHoyle_MP as the new Speaker of the House of Commons, with 325 votes.

"I will be neutral. I will be transparent", Hoyle said after the result, adding that "this House will change but it will change for the better".

​Hoyle, who defeated six other candidates, was chosen on Monday, 4 November, after the third round in a secret ballot.

Hillier and Leigh were knocked out in the first round. Roise Winterton failed to proceed further in the second. After Harriet Harman withdrew from the election, the UK lawmakers launched the third round of voting.

The 62-year-old has been Labour MP for Chorley, near Manchester, since 1997 when he won the seat from a Conservative in Tony Blair’s first landslide election victory.

He has a menagerie of pets named after politicians - a parrot called Boris (after Johnson), a tortoise called Maggie (Thatcher), a rottweiler called Gordon (Brown) and a terrier called Betty (after the legendary Speaker, Boothroyd).

Normally a cheerful and avuncular figure Hoyle - who has chaired Budget days and other sessions - is still struggling with the grief of losing his daughter Natalie in tragic circumstances.

Hoyle’s ex-wife Miriam Lewis, a Conservative councillor, told the inquest Natalie had been in a “toxic relationship” before her death but was “finally coming to terms with the fact that it wasn’t going to go anywhere.”

In an interview with the Sunday Times on 3 November, Hoyle said: “It’s still difficult…I still can’t come to terms with it…It’s coming up to that anniversary, so it’s the hardest thing. It makes life very difficult.”

© REUTERS / STRINGER
The 11-metre effigy of Britain's Speaker of the House of Commons John Bercow holding Prime Minister Boris Johnson and Labour Party leader Jeremy Corbyn is seen after it was unveiled today ahead of the Edenbridge Bonfire Celebrations in Edenbridge, Britain October 30, 2019. REUTERS/Tom Nicholson NO RESALES. NO ARCHIVES

Hoyle, whose rich Lancastrian accent and polite but firm style will be a stark contrast to Bercow’s patrician manner.

Unlike Bercow, whose belligerent manner arguably raised the temperature in the chamber and wound up pro-Brexit MPs, Hoyle is promising to be a humorous and impartial referee.

"Who do you think should be the next Speaker of the House of Commons?" [Sample: 101 MPs]

Hoyle has also promised to introduce a doctor’s practice in Parliament to allow MPs to get medical and psychological help and has also said he is “open” to the idea of a nursing room for breastfeeding MPs.

One of the interesting things about the pitches for Speaker is that even though John Bercow is supposed to have done such a good job everyone is going out of their way to underline how different they'll be to John Bercow.

Bercow, known for his colourful ties and his flowery language, was elected as Conservative MP for Buckingham in 1997 and became Speaker in 2009. He retired last week and is already tipped for a career as an after-dinner speaker on the lucrative US circuit.

Lindsay Hoyle, the last sane man in Britain. And probably about to have his voting record frantically Googled by furious GTTO and FBPErs.

Mr Bercow was praised for restoring honour in the job of Speaker after Michael Martin, a Scottish Labour MP who was seen as weak for failing to stand up to Tony Blair or Gordon Brown and for lacking integrity when it came to the MPs’ expenses scandal.