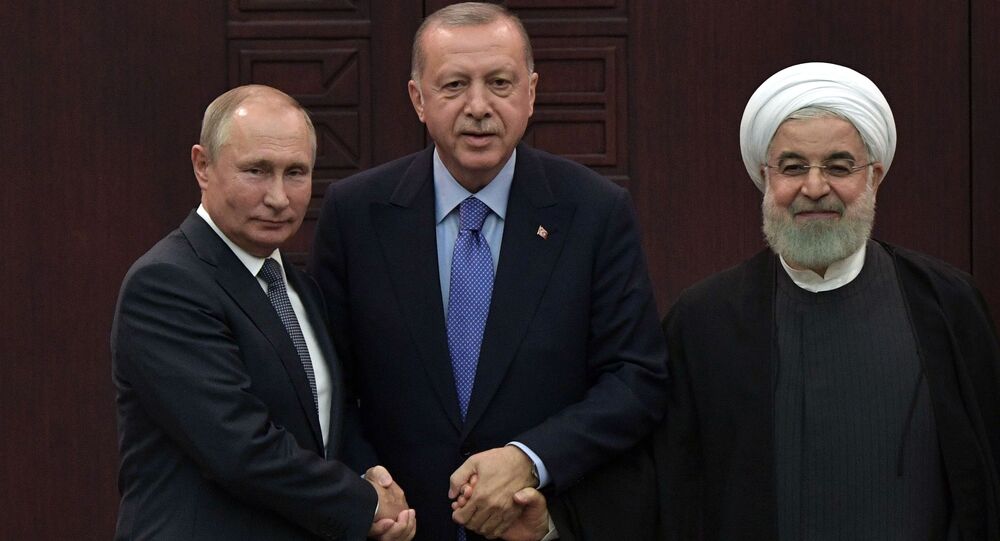 On October 29, a ministerial meeting in the Astana format took place in Geneva. The Russian Foreign Minister with the Turkish and Iranian counterparts had a conversation with UN Special Envoy for Syria Geir Pedersen ahead of the first meeting of the constitutional committee on Wednesday.

"We agreed to continue energetic efforts in cooperation with all Syrian parties in the interests of establishing lasting long-term stabilization on the ground, and eliminating the remaining hotbeds of terrorism", Russian Foreign Minister Sergey Lavrov said following a Geneva meeting in Astana format with his counterparts, Turkish Foreign Minister Mevlut Cavusoglu and Iran's Foreign Minister Mohammad Javad Zarif, ahead of the launch of the Syrian Constitutional Committee.

Lavrov also commented on the US plans to use oil fields in Syria, saying they are illegal, and Moscow will defend this position in contacts with Washington.

"These decisions stipulate that any illegal exploitation of the natural resources of a sovereign state without its consent is illegal. We insist on this. Our American colleagues are well aware of our position, and we will defend it", Lavrov stressed.

In a joint statement, Russia, Turkey, and Iran emphasised the need to increase humanitarian assistance to Syria and ensure the return of refugees, according to a joint statement by the top diplomats of the three countries on Tuesday.

"The Ministers: Stressed the importance of the broader settlement process moving forward to increase humanitarian assistance to all Syrians throughout the country without preconditions and discrimination, to facilitate safe and voluntary return of refugees and internally displaced persons (IDPs) to their original places of residence in Syria as well as to build confidence and trust between the Syrian parties", the statement said.

'The Syrian Constitutional Committee Must Work Without Any Foreign Interference, Ministers Say

The Ministers expressed their view that "the work of the Constitutional Committee should be governed by a sense of compromise and constructive engagement without foreign interference and externally imposed timelines aimed at reaching general agreement of its members that would enable the outcome to receive the widest possible support by the Syrian people".

They also praised the convening of the Syrian Constitutional Committee (SCC) as a result of their joint efforts and the efforts by UN Special Envoy for Syria Geir Pedersen, and expressed commitment to support the work of the SCC by meeting with the Syrian parties and the UN Special Envoy.

© AP Photo / Lefteris Pitarakis
Smoke from a fire caused by an incoming mortar fired from the Syrian side, billows behind a mosque's minarets in Akcakale, Sanliurfa province, southeastern Turkey, smoke billows from targets inside Syria during bombardment by Turkish forces Thursday, Oct. 10, 2019

The statement added that the Syria Constitutional Committee must work with no foreign interference and no externally imposed timelines.

'Syria Should Be Controlled Only By Government, No Threat Should Emanate For Neighboring Countries', Zarif Says

Iranian Foreign Minister Javad Zarif said that the Syrian territory "should be controlled only by government, armed forces of Syria, and that no threat should emanate for neighboring countries".

Elaborating on the situation in northeastern Syria, Turkish Foreign Minister Cavusoglu said that, "contrary to allegations made by some, the [Turkish] military operation in Syria contributes to the political process".

"When time comes that the Syrian regime at the end of this political process is capable enough to protect its country's territories, eliminate the terrorist organization from that, I think all the territory will be handed over to Syria", Cavusoglu said.

He also added that "if Turkey sees YPG, PKK elements in the safe zone area in northern Syria, it will not hesitate to take actions to eliminate them'.

In late September, the United Nations declared the establishment of the Syrian Constitutional Committee that was to draft a constitutional reform. It is a 150-member committee with equal representation of the Syrian government, opposition, and civil society. It has a smaller committee to it consisting of 45 people — 15 from each of the three represented groups — that will prepare constitutional initiatives, while the larger body will be responsible for adopting them. The committee is to be launched in Geneva on October 30.