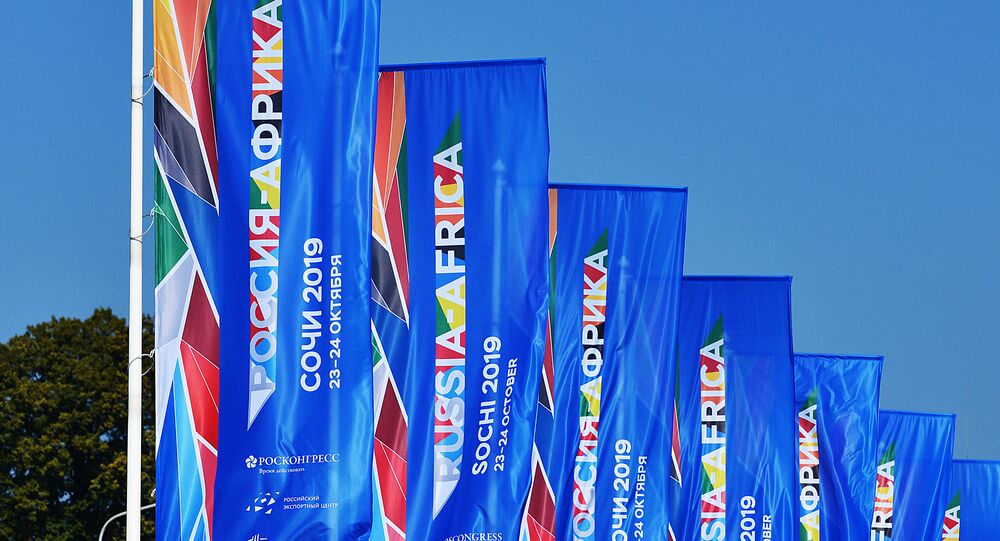 SOCHI (Sputnik) - Media often choose to focus the attention on the negative aspects and omit the positive ones when it comes to covering Russia and the African countries, Rwandan Minister of Trade and Industry Soraya Hakuziyaremye said on the sidelines of the Russia-Africa economic forum in Sochi.

"As you know, Russia and Africa may suffer from the same biased narrative from the main media, where people choose to show only one side of what is happening, and it is always the negative side. ... The African continent is not about war, famine, conflicts and poverty. There is dynamism, there is growth, economic growth, development," Hakuziyaremye said, adding that "these are the positive stories that people should also showcase."

To illustrate her point, the minister pointed to the fact that six African countries are among the top ten fastest-growing economies worldwide.

"I think it has been an eye-opener as well for the African continent to find out what is really happening in Russia," she added.

The prejudice of Western media covering the African countries has been gaining a growing momentum in the public discourse. Twitter was stormed by hashtags such as #someonetellcnn and #someonetellNewYorkTimes as more and more people in Africa and abroad took to social media to express their outrage about certain media covering events in Africa in a way they would normally not do if covering events in the West: from publishing sensitive data, such as dead bodies covered in blood, to spelling out only the countries of origin of victims from the West, as happened in case of the deadly Ethiopian Airlines plane crash earlier this year.

It is all doom and gloom when it comes to the coverage of Russia too in media of the United States, Canada and Europe, research by the Rossiya Segodnya news agency revealed earlier this month. Analysts studied 81,500 articles and news reports and found that 49.8 per cent of them were critical of Russia and 48.1 per cent neutral, with only 2 per cent of stories being positive. Of US outlets, CNN published the most negative stories about Russia (982), followed by The Washington Post with 555 and The New York Times with 346. The UK’s Daily Express and The Times were close behind with 339 and 311 stories respectively.

Rwandan Minister of Trade and Industry Soraya Hakuziyaremye also spoke about gender parity. She said that it can boost economic growth and countries which are reluctant to invest in their female population are unlikely to achieve success and sustainable development.

Rwanda, where women make up over 60 per cent of the parliament and 50 per cent of the government, has been in the vanguard of women empowerment and the gender gap minimization, especially in politics, both regionally in Africa and globally as well.

"I know for sure is that if a country does not invest in the 50 per cent of its population, I do not know how sustainable it [the country] will be. So it is not about the quantity, it is about making sure that people are included. You can see even in the developed countries and some of the most advanced, the problem of inequality is there, be it gender-based, social inequality or economic inequality. So we have chosen to really include everyone in your development path. And I think it just makes common sense – why would you want to develop your country for only 50 per cent of your population? It will never succeed," Hakuziyaremye said.

With rich experience in the private sector prior to commencing her government career, Hakuziyaremye made a reference to the corporate world - "the more diversity you have in your board and your management in terms of gender, the return of equity is always higher."

In the case of Rwanda, the gender parity has also brought about an actual added value economically, the minister opined. "I think it is simply the facts. If you look at the growth that the country has had, the last 18 years our economy has grown at an average of seven per cent, consistently. Is it a coincidence that all the laws and policies for gender equality started at the same time?" she said.

The UN Women agency has repeatedly commended Rwanda for its gender policies and partnered with the Rwandan government as a hub for knowledge and technical expertise on gender and women empowerment issues. Equal rights for men and women are guaranteed by the Rwandan Constitution, which also provides for a 30-per cent representation of women in all decision-making organs.

The inaugural Russia-Africa Summit and Economic Forum ran through Wednesday-Thursday in the Russian resort city of Sochi. It brought together the heads of state or government of over 40 African nations, while 11 others sent their vice presidents, foreign ministers or ambassadors.