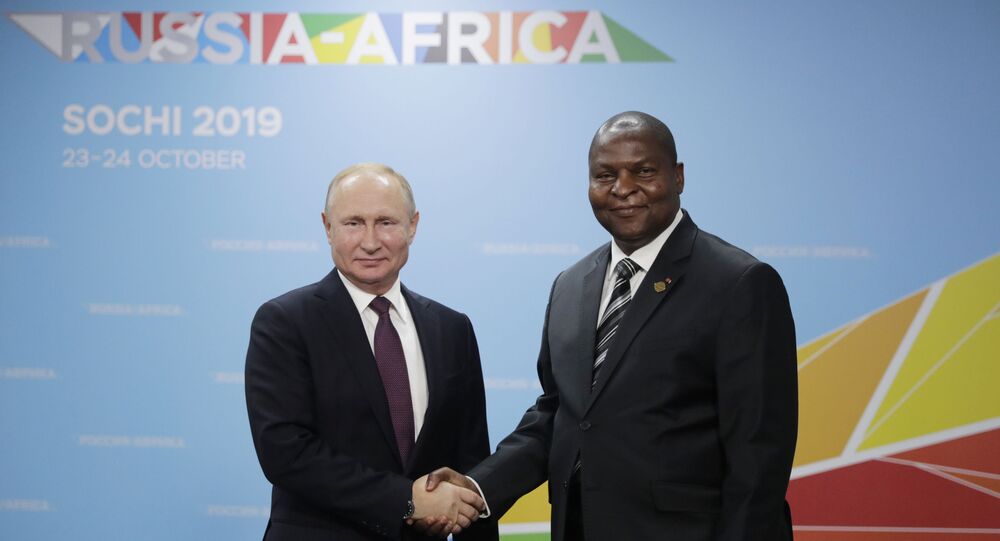 SOCHI (Sputnik) - The Central African Republic (CAR) needs to receive more weapons from Russia to properly accomplish the mission of its army, as the 5,000 assault arms that have already been delivered are not enough, President Faustin-Archange Touadera said in an interview.

"Russia has accepted to deliver 5,000 assault arms to CAR. These deliveries were made. Today our forces still need other capacities, which was in my proposition during my meeting [with Russian President Vladimir Putin]. I asked to seek additional aid of Russia, if it could consider additional aid to CAR, to allow our army to accomplish its mission ... 5,000 arms — you understand that it's not enough. It's an army and it needs all the means to correctly accomplish its mission," Touadera said.

The president also praised Russia's "gracious" arms deliveries to CAR and Russian instructors' assistance in training local servicemen. According to him, around 3,000 CAR military officers have already followed their training.

"There was also a gracious arms delivery from Russia. The first was some time ago and recently two last deliveries in May, which gave our Defense Forces the means to accomplish their mission. One of the positive aspects is that after the peace agreement and arms deliveries from Russia military the FACA [Central African Armed Forces] contingent is deployed on the ground. ... We continue ... the deployment of our defense forces across the state, in order to return the rule of state on our whole territory," Touadera said.

The defence ministries of Russia and the Central African Republic (CAR) are looking into further cooperation, including the possibility of setting up a Russian military base in the African country, CAR President said.

"We continue the work in this framework between our defense ministry and the Russian defense ministry to look into the possibility of cooperation," when asked whether negotiations on a Russian military base in the republic were underway.

"Our cooperation with Russia is transparent. We addressed the Foreign Ministry and [Russian] President [Vladimir] Putin in the framework of arms deliveries to CAR. That is done under the control of the Sanctions Committee of the UN... It was previewed that the Russian instructors could come train CAR military to use these arms. It's the Russian defense minister whom CAR defense minister addressed for this question. It's a state-to-state cooperation," Toudera said.

Only a full suspension of UN-imposed arms embargo on the Central African Republic will allow the government's armed forces to complete its mission of subduing outlawed armed groups in the country, CAR President added.

Russian Business Welcome to Invest in CAR, Country Has Much to Offer

The Russian business is welcome to invest in the Central African Republic (CAR), as the country has a lot to offer in commerce and industry, Faustin-Archange Touadera said.

"There is also a number of sectors for investment. Let's say Russian businessmen have a lot of capacities in CAR in the sectors of commerce and industry. These sectors were liberalized, so they can come and launch their activities, invest in CAR, respecting ... the laws of commerce," Toudera said.

"This is the company like any other, a private company working according to Central African Republic laws,” the President said to a Sputnik correspondent following the Russia-Africa summit in Sochi.

Touadere emphasized that he does not have any concrete information about the company’s ventures in the country.

Earlier this year, Lobaye Invest received a license to mine gold and diamonds in CAR.