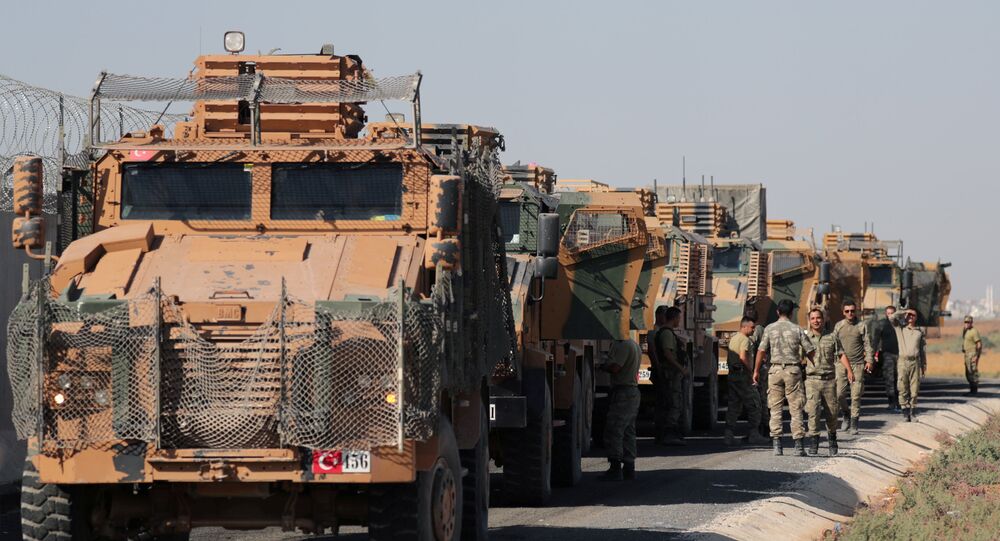 The US president earlier announced that he was working with the Congress to impose "powerful" sanctions on Turkey over its offensive in northern Syria, targeting Kurdish forces there. Ankara insists that the military operation is aimed at combating terrorist forces, threatening the country.

US President Donald Trump has reiterated his earlier promises, by stating that "big" sanctions will be slapped on Turkey over its "Operation Peace Spring" in Syria. He argued that sanctions are better than going to war with Turkey, who is a NATO member, once again vowing to end the trend of US getting into "endless wars" around the world.

....Kurds may be releasing some to get us involved. Easily recaptured by Turkey or European Nations from where many came, but they should move quickly. Big sanctions on Turkey coming! Do people really think we should go to war with NATO Member Turkey? Never ending wars will end!

Trump also dismissed concerns that Daesh* prisoners, held by Kurds, could escape during the chaos of fighting with Turkish forces and even alleged that Kurds might release some of them intentionally to "get [the US] involved". The US president insisted that in the event some of these prisoners flee, they can always be recaptured by either Turkey or by the "European Nations from where many [of them] came".

The POTUS’ statements come in line with his previous promises to avoid US involvement in costly "endless wars" abroad, as well as to respond to Turkey in strong manner over its offensive in Syria's north. He stated on 13 October that he was working with Congress on both sides of the aisle to come up with "powerful" sanctions against Ankara.

The same people who got us into the Middle East mess are the people who most want to stay there!

The US is not alone in plans to slap sanctions on Turkey over its military operation in Syria, with the EU and Arab league also mulling such options. The European Council is expected to discuss possible sanctions during its meetings on 17-18 October.

At the same time, Turkey warned other countries, specifically the US, against imposing economic measures against it vowing to retaliate. Ankara added that no outside pressure will force it to abandon the military operation since it's a matter of the country's national security.

Turkey started its military manoeuvre dubbed "Operation Peace Spring" on 9 October claiming to target terrorists in northern Syria east of the Euphrates. Among the groups designated as terrorist by Turkey are mostly Kurdish forces, which as Ankara insists, are linked to the Kurdistan Workers party (PKK), also deemed a terrorist outfit by Turkey. The majority of Western and Arab countries have condemned the Turkish military operation.