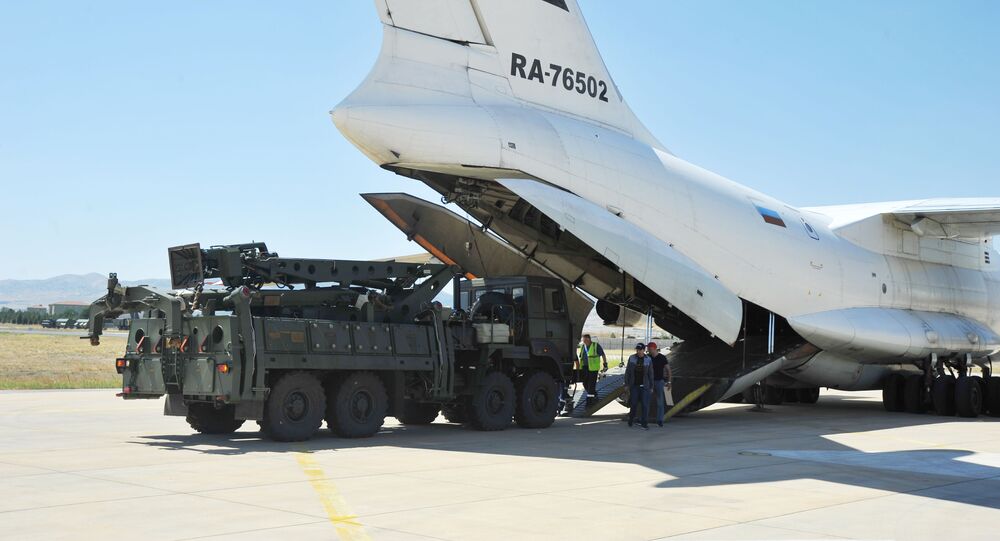 Russian Prankster: Sen. Graham Said if S-400 is Activated, Stopping the Sanctions Will Be Impossible

Two months ago, US Senator Lindsey Graham fell victim to Russian pranksters Vladimir Kuznetsov and Alexey Stolyarov, also known as Vovan and Lexus. In August, pretending to be Turkish Defence Minister Hulusi Akar, they were able to contact the congressman by phone and ask Graham to pose the US president a few questions and call back.

Lindsay Graham is the Republican senator who, along with his colleague Chris van Hollen, drafted a bill on full-scale sanctions against Turkey over its invasion of northern Syria, codenamed Operation Peace Spring.

Sputnik has spoken to one of the pranksters, Alexey Stolyarov (Lexus), and asked him to tell why they were interested in US Republican Senator Graham at that time; how and what they managed to talk with him about.

Alexey Stolyarov said they were interested in the situation that developed in late July with the delivery of S-400 systems to Ankara and the US concern about these events.

“Against the backdrop of sharp words about why Turkey supposedly should not buy S-400 from Russia, especially stood out Republican Senator Lindsay Graham. What is more, the senator spoke, as if on behalf of and as the president of the United States. Therefore, on behalf of the Turkish Minister of Defence, we decided to find out what conditions he wants to offer the Turkish leadership: whether this is literally pressure on the Turkish authorities, on an independent country, or is it some kind of soft flirting. That's why we got in touch with him,” Lexus explained.

According to Lexus, the figure of Graham attracted the attention of the pranksters because the policy pursued by Trump in relation with Ankara was dictated initially by Graham himself. “He was Trump’s advisor on Turkish issues, and Trump discussed all issues of Turkish politics with him, including relations in the defence field,” Alexey said.

Concerning the S-400, the pranksters wanted to hear the true motivation on why the US is so opposed to the appearance of Russian systems in Turkey.

“We have received a very important answer: if Turkey puts these complexes in service, then other states will also want to do so. That is, Turkey will set a bad example for other countries, and this threatens huge losses for American companies,” said Lexus.

Furthermore, the Russian pranksters and Lindsay Graham discussed the sanctions the US threatened to impose on Turkey over purchasing Russian weapons.

“Graham, thinking he was talking with the “Turkish Minister”, told me that if the S-400 system was activated, it would be impossible to stop the sanctions. A free trade agreement would also become impossible. President Trump sympathises with President Erdogan’s situation but, as Senator Graham noted, the US Congress doesn’t,” said Lexus.

Following the S-400 question, the pranksters turned to the Syrian situation and the Kurdish issue, where Senator Graham voiced a position that is completely at odds with his current actions. After all, it was he who introduced in Congress a sanctions bill against Turkey, while in conversation with Russian pranksters he said quite the opposite:

“We also decided to ask Graham about the Kurdish issue. The senator admitted that he was an extreme opponent of any cooperation with them on the Syrian issue. He said it was he who allegedly advised Trump to stop all interaction with them and seek Turkey’s support. But in the end, after Turkey launched the operation in Syria, we now see his real position. Back then, in a conversation with “Hulusi Akar”, he shifted all the blame for the anti-Turkish actions on Trump, trying to go back on his words and come across as goodie-two-shoes in contrast.”

Two weeks later after the first phone call with the senator, the pranksters held one more:

“For the second time, it was Graham’s initiative. He said that he had met with Trump and passed him the contents of our conversation,” Alexey Stolyarov said.

Two years ago, the pranksters managed to play a prank on another Republican senator, John McCain. “Back then we talked with him on behalf of the Ukrainian Prime Minister Groysman (was in tenure as Prime Minister of Ukraine from 12 April 2016 to 29 August 2019) on the topic of anti-Russian sanctions and his personal attitude to President Trump. This time we used the same methodology, the usual diplomatic approach, a very long process. However, we succeeded both for the first and the second time, and if necessary, I’m sure it will work out for the third one as well,” Lexus added.