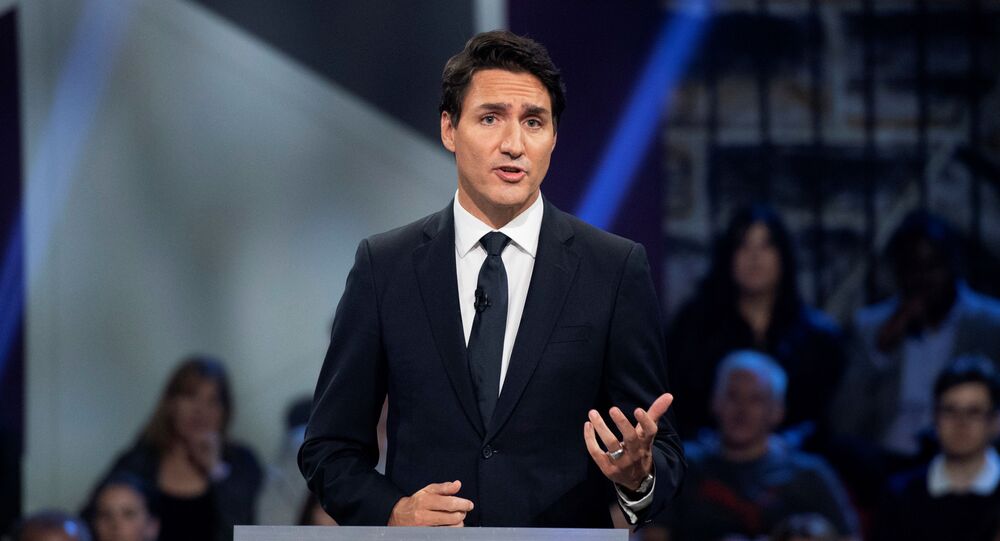 Opposition Leader Calls Trudeau ‘a Fraud’, Says He ‘Does Not Deserve’ to Rule Canada

With just a few weeks remaining until Canada's 21 October federal elections, Trudeau remains embroiled in a scandal over photos and videos which feature him posing in brown or black makeup at parties in his early years. Conservative Party leader Andrew Scheer, in turn, faces uproar due to his dual Canadian and American citizenship.

In an apparent nod to a blackface scandal, Scheer berated Trudeau for pretending to stand up for Canada and failing to reveal at first the details of his putting on dark make-up.

The opposition leader insisted that the Prime Minister cannot even remember how many times he put blackface on, because “the fact of the matter is he’s always wearing a mask […], he puts on a middle-class mask and then raises taxes on middle-class Canadians”.

“Mr. Trudeau, you are a phony and you are a fraud and you do not deserve to govern this country,” Scheer added.

The remarks come shortly after the Conservative Party slammed Trudeau for using two aircraft, including a cargo plane, during his 40-day election campaign, despite previously boasting about his party’s bid to tackle climate change in a recent meeting with young environmental activist Greta Thunberg.

“Despite marching in climate strikes, lecturing everybody else on lowering emissions and imposing a carbon tax on hard-working Canadians, Justin Trudeau and the Liberals are secretly using two aircraft to campaign in this election,” the party’s press release read.

Scheer, in turn, was quoted by Canada's CBC broadcaster as saying that Trudeau was a “carbon hypocrite”.

“I don’t know what types of props or costumes or camping equipment he’s bringing along, but he’s made his choice. If he thinks it’s okay to emit far more emissions than our campaign is emitting, we’re going to hold him to account for his hypocrisy,” Scheer argued.

Trudeau, for his part, claimed that having a cargo plane allows his party “to do more events in more parts of the country and meet more Canadians” and that he wants to “highlight that Andrew Scheer and his Conservatives did not purchase carbon offsets for their transportation because they think pollution should be free”.

The two’s showdown comes as Trudeau is facing questions over the publication of images, in which he poses in brown or blackface makeup during parties in his early years. The Prime Minister has repeatedly apologised for doing so, saying that it was “unacceptable”.

Scheer, in turn, is embroiled in a scandal following revelations that he has been a dual Canadian and American citizen since birth, despite the fact that his party has repeatedly criticised dual citizenship among politicians.

The Canadian federal elections, scheduled for 21 October, are due to elect members of the House of Commons to the country’s  43rd Parliament.  The Conservative Party and the New Democratic Party led by Jagmeet Singh will contest the ruling Liberal Party headed by Trudeau.

Trudeau's Blackface History: Do Not 'Color' Us Shocked