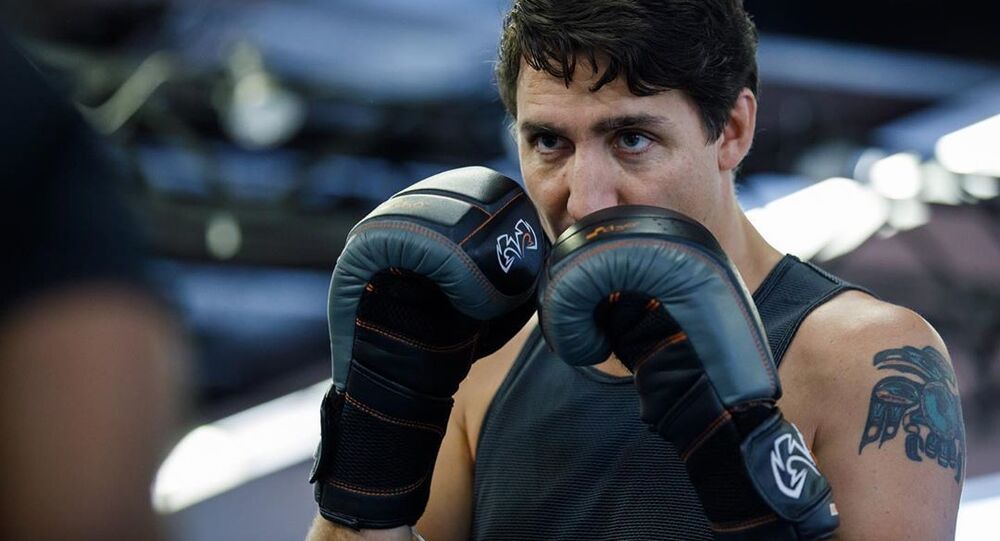 Canadian Prime Minister Justin Trudeau is embroiled in an uproar over photos and videos featuring him posing as someone from another race in brown or black makeup at parties, just a few weeks ahead of Canada’s federal elections.

Independent Canadian Senator Patrick Brazeau has gone on Twitter to mock the country’s Prime Minister Justin Trudeau by calling for a boxing rematch on Halloween.

“[…] I am officially asking a rematch with [Justin Trudeau]. I suggest Halloween Day and you can come as Apollo Creed!” Brazeau tweeted, referring to a fictional black boxer in the Rocky films.

Ok, let me make this clear: I am officially asking a rematch with @JustinTrudeau. I suggest Halloween Day and you can come as Apollo Creed! This time, I will be Rocky in Rocky II. #cdnpoli @TheSlyStallone

Brazeau has repeatedly asked for a rematch following a 2012 charity boxing match between him and Trudeau, in which the Canadian Prime Minister won after a referee stopped it in the third round. Trudeau never gave his go-ahead for a rematch.

Brazeau’s latest call is widely perceived as a reference to a brand blackface scandal surrounding the release of a new video in which Trudeau was seen being dressed up as a black man in an Afro wig.

Many netizens appreciated Brazeau’s rematch call, describing it as a “major league troll level” and “the best tweet of 2019”.

I applaud you, good sir. The Canadian people demand a re-match!

A rematch is definitely a great idea.

Justin at the gym today. pic.twitter.com/OmwnodKOOF

Make it a dance off! pic.twitter.com/23tPnWzrfb

“I applaud you, good sir. The Canadian people demand a re-match!” one user tweeted, while another wrote that “a rematch is definitely a great idea”.

Brazeau’s tweet comes shortly after Trudeau's photo-op at a Montreal gym where he trained with boxing coach Ali Nestor, throwing some punches and working on blocks.

Justin Trudeau stopped by the Academy De Combat Ultime Ness Martial in Montreal Wednesday morning to get in some training with boxing coach Ali Nestor.#cdnpoli #elxn43

Earlier, Time magazine obtained and revealed a photo of Trudeau posing in brownface makeup during a school party in 2001. He confirmed that he was dressed as a character from Aladdin and that he takes “responsibility for my decision to do that”.

“Darkening your face regardless of the context or the circumstances is always unacceptable because of the racist history of blackface,” Trudeau added, saying at the same time that he could not guarantee that there won’t be more blackface photos of him.

Brown or blackface is often considered to be offensive to black, South Asian or Latin American communities for advancing stereotypes and ridiculing non-white culture.