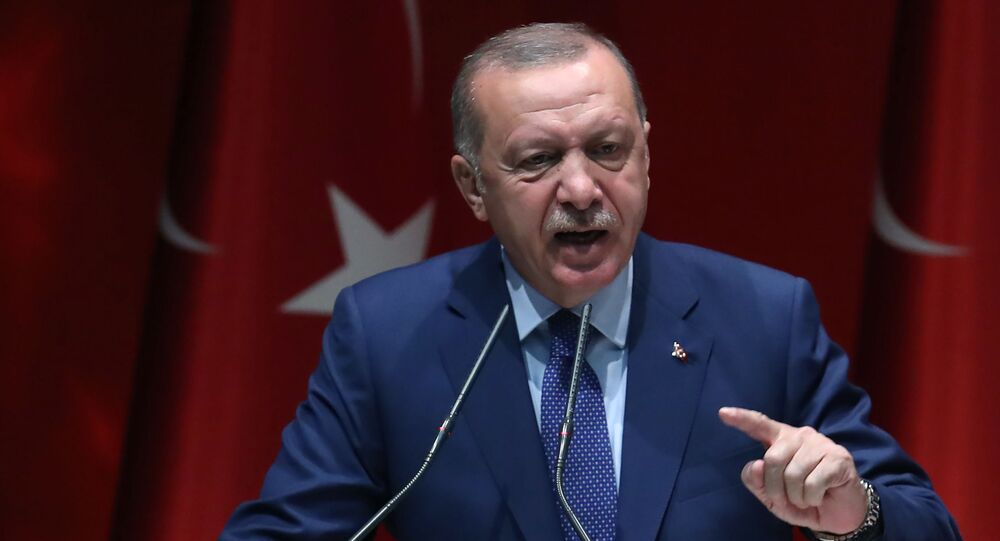 Last week, the US introduced a new round of sanctions against Iran over attacks on Saudi Aramco oil facilities that it blamed on Tehran, despite the Islamic Republic strongly denying having participated in the incident, responsibility for which was claimed by Yemen’s Houthis group.

Ankara will not stop buying oil and natural gas from Iran despite threats of economic penalties from Washington, Turkish President Tayyip Erdogan said to reporters during his flight back from New York, where he participated in the 74th United Nations General Assembly.

“At present, it is not possible to reset our relationship with Iran in terms of both oil and natural gas. We will get our gas again from there. But we have a shortage of oil. The private sector was mainly buying oil. Unfortunately, these companies don't buy oil right now because they are afraid of the US threats. But we will continue our relationship with Iran, especially in many other areas,” Erdogan said, as quoted by Milliyet newspaper.

Erdogan particularly stressed that Turkey was not afraid of possible US sanctions, as economic cooperation with its eastern neighbour remained important for Ankara, which echoed his statement on Wednesday, following the introduction of penalties against several Chinese firms "that transported Iranian oil contrary to US sanctions”, according to US Secretary of State Mike Pompeo.

“Sanctions have been avoided in the past,” Erdogan told Fox News on Wednesday, after the measure was announced. “I for one know that sanctions have never solved anything.”

Last week Washington introduced new sanctions against Iran and blacklisted its Central Bank following accusations of attacks on Saudi Aramco oil facilities, which was blamed on Tehran by the US and several European powers, despite responsibility being claimed by Yemen’s Houthis group. Iran has repeatedly denied its involvement in the incident.

Many states, including Russia and Turkey, urged the US to avoid premature judgements on the matter, with Erdogan particularly distancing himself from the allegations expressed by Washington officials.

"We need to recognise attacks of this scale come from several parts of Yemen. But if we just place the entire burden on Iran, it won't be the right way to go. Because the evidence available does not necessarily point to that fact," Erdogan told Fox News on Wednesday.

In May 2018, the United States abandoned the Joint Comprehensive Plan of Action (JCPOA), also known as the Iran nuclear deal, and reinstated harsh sanctions on Iran that specifically targeted Tehran’s oil exports.

It was not the first time Turkish president defied potential US sanctions, following US Congressional demands to economically punish Turkey for the purchase of Russian S-400 air defence systems. Turkey's president repeatedly stated he would carry on with the deal despite the threats of penalties from the US.