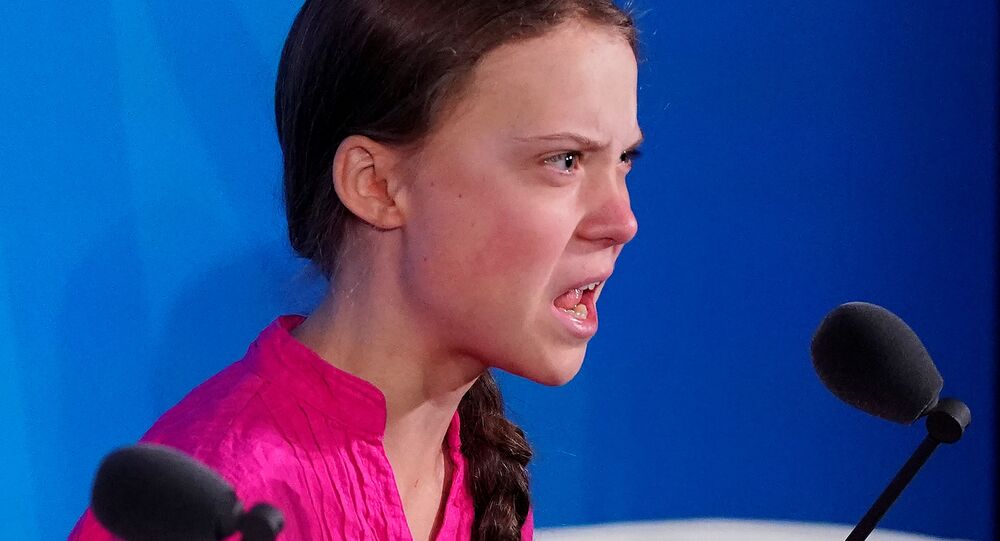 The green activist schoolgirl, who shot to fame as potentially the youngest Nobel Prize winner, has become a poster child for climate change movements, adored by many people around the world. But some of her actions and statements have cast doubt on the notion that she is an expert in the sphere she champions so rigorously.

Greta Thunberg, a young activist from Sweden who grabbed the media’s attention around a year ago, has recently raised the stakes and her popularity by giving a "shaming" speech at the UN Climate Action Summit. The 16-year-old protester, who just completed a Transatlantic trip on board a multi-million-dollar emissions-free yacht, accused world leaders of "stealing [her] childhood" and giving empty promises about preserving the planet's ecology.

However, questions and doubts have been surfacing for some time now, indicating that behind the passionate speeches she delivers, hides a lack of real expertise on climate issues.

Thunberg has never been seen on climate debates that would involve some acute issues or delve into the details of climate change. Journalist Marc Reisinger once travelled to Sweden in a bid to understand, what exactly Thunberg advocates for, but as soon as he approached her with his questions, a woman, possibly a handler, intervened and cut short the interview, citing having "something to do now" involving Greta.

Interestingly enough, the Sweden schoolgirl dismissed the rumours that her passionate addresses are prepared by speechwriters, which could allegedly explain the fact that she seems to never communicate with journalists off-stage. However, the climate activist noted that although she writes her "own speeches", she does ask for "input" from other people, including a "few scientists". Greta elaborated on the latter by saying she wants her speeches to be "absolutely correct" in terms of facts.

Thunberg also gives little detail as to how to achieve the goals she is advocating in her speeches. The goals themselves also raise eyebrows, as the young activist focuses on emissions of gases such as Sulfur Dioxide (SO2), but pays little or no attention to other issues, such as wildfires in Latin America and Africa, or massive deforestation. She reacted to the news of fires in Siberia by diverting the topic to melting Arctic ice.

Right now huge parts of the Arctic are burning. This is not only devastating for the people who live there, and the ecosystems.
But also because this emits enormous amounts of greenhouse gasses. Such as methane gas, escaping from rapidly thawing arctic permafrost. https://t.co/vTishIzRkA

The choice of her "official handler" also raises questions. The activist is mostly accompanied by Luisa-Marie Neubauer, a member of prominent "ONE Foundation" – an organisation founded by Melinda Gates, George Soros and a number of other philanthropies, which actually focuses on combating poverty and hunger globally. Yet, her organisation has little to do with fight against the climate change the young Swedish activist is waging.

Real Activist or PR Project Exploited by a Number of Benefactors?

Another point of concern is that Greta Thunberg could be no more than a mere "PR project" for people who back her. One of the possible direct benefactors is her "PR manager", Ingmar Rentzhog, a founder of We Don’t Have Time – a start-up focused on influencing politicians and business leaders to take actions to combat the climate change. Rentzhog even initially claimed to have accidentally stumbled upon Greta's solo strike in front of Sweden's parliament on his way to work, but partially backtracked on the story, once it was revealed that he was already acquainted with the girl's parents.

Waheed Uddin, a professor, consultant, and former UN expert, pointed to another possible benefactor, who could be using Greta Thunberg to achieve own goals – the UN. He namely called her a "child actress who is fed script by UN bureaucrats for their global one world government dream". The professor pointed out that people like Greta are needed to counter anti-globalist agenda, such as the one promoted by US President Donald Trump in his speech at UN General Assembly, and to foster idea of a climate tax to fill UN Climate Bank coffers.