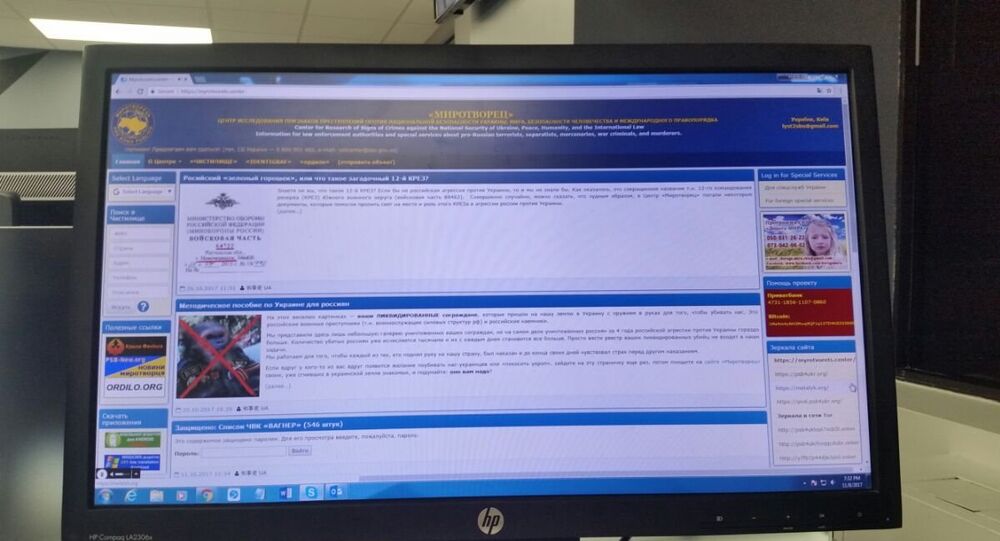 Russia and Ukraine faced off in the European Court of Human Rights in Strasburg earlier this month, with Ukrainian representatives accusing Russia of ‘human rights abuses’ in Crimea, while Russian officials and the British legal team dismissed the case as having ‘no legal content’. and accused Kiev of wasting the court’s time.

The Russian Deputy Justice Minister, Mikhail Galperin, along with UK Brick Court Chambers lawyer and royal adviser Michael Swainston, has been added to the ‘Myrotvorets’ (‘Peacemaker’) website, a notorious database launched by Ukrainian “activists” with support from the government in late 2014 and tasked with listing the ‘enemies of Ukraine’ and revealing their personal information.

Galperin was added to the database after he fended off Ukraine’s claims about alleged human rights violations in Crimea by Russia in the ECHR. Swainston, the head of the UK legal team, was added to the ‘enemies of Ukraine’ list due to his alleged "justifying of Russian aggression" and "manipulation of information of highly social significance".

The case, submitted to the court by Kiev in 2014, asked the ECHR to rule on a number of issues, among them being whether or not Russia had ‘controlled’ Crimea in late February of 2014, before the March 16, 2014 referendum.

The popular vote, held in the aftermath of the Maidan coup in Kiev in February 2014, which overthrew the country’s elected government and saw the rise of nationalist elements, saw the predominantly Russian population of Crimea vote overwhelmingly in favour of rejoining Russia.

The Myrotvorets platform has become infamous for its publication of private information on persons it deems ‘enemies of Ukraine’, including home addresses and private phone numbers. In 2015, former Ukrainian lawmaker Oleg Kalashnikov and journalist Oles Buzina were killed in Kiev after their information was published by Myrotvorets, while many others have faced countless threats and attempts at intimidation.

Reporters Without Borders and the Committee to Protect Journalists have called on then-Ukrainian President Petro Poroshenko to publically condemn the bullying campaign, however, to no avail.

For its part, Myrotvorets has already asked Ukraine’s authorities to consider Galperin’s and Swainston's statements during ECHR proceedings as “conscious acts against Ukraine’s national security, peace, and the security of humanity and international legal order, as well as other legal violations.”

© Photo : the Myrotvorets website
A screenshot from the ‘Myrotvorets’ (‘Peacemaker’) website. The red-colored inscription reads "The Myrotvorets Centre asks law enforcement to consider the present post a declaration of committing conscious acts against Ukraine’s national security, peace, and the security of humanity and international legal order, as well as other legal violations by this person."

“Sadly, this is just another example of the fascistic policies of fear employed by certain sections of the current Ukrainian authorities, says Alan Bailey, a UK-based political commentator and activist. “Anyone who dares speak publicly and critically” about Ukrainian authorities “is liable to be added to the database and have their private details exposed to a public audience which will most certainly include people who wish them harm. Indeed, public figures such as Roger Waters have been added to the database, so any official figures speaking against Ukrainian policies are targets.”

Pointing out that “many European countries and international bodies have requested Ukraine destroy this database,” with Ukraine refusing to do so, Bailey suggests that the refusal was a sign of the policies currently employed by the country.

“All one has to do is speak positively on such subjects as how Crimeans are happier now as part of the Russian Federation, which they patently are…and you are liable to find yourself a marked target as a member of the Myrotvorets website,” Bailey concludes.

Meanwhile, according to geopolitical analyst Ollie Richardson, Mirotvorets owes its continued existence in large part thanks to support from Ukraine’s Interior Ministry.

“Interior Minister Arsen Avakov, who gained his post thanks to the 2014 coup and has held it ever since”, Richardson explains, “needs both Mirotvorets and ‘tamed’ radical groups like ‘National Corpus’ [a Ukrainian –ultranationalist party] to remain at hand, ready to be used against not only any internal force that shows any sympathy towards Russia…but also external so-called ‘enemies of the state’ who remind Ukraine that, for example, it still buys Russian gas (in reverse flow from Europe) but at twice the cost.”

In other words, “the addition of this or that Russian deputy to the ‘Myrotvorets’ database (the contents of which the Ukrainian courts formally use as evidence, I might add) has little to do with defending Ukraine against some alleged ‘aggressor’, but is more about the oligarchical system trying to remain above the water,” Richardson stresses.

The ‘Myrotvorets List’ “is clearly aimed and intimidating people into silence and the inclusion of another relatively high profile Russian official for stating Russia's legal case in Strasbourg will have the effect of reminding all of us who do not have state protection that there can be consequences for stating ones views publicly,” Marcus Godwin, a British political analyst, says.

“This as well as the court case itself is a propaganda exercise. To be effective propaganda has to be constantly repeated. Silence is its greatest enemy. These court cases allow the lie that Crimea is under Russian occupation to be regurgitated again and again throughout the western world.  The same tactic is being used with MH17 and the Skripal affair,” the observer argues.

Spoke in the Wheel of Peace Efforts?

Finally, some see the addition of Galperin and Swainston to the Myrotvorets list as a threat, perhaps a deliberate one, to thawing Russian-Ukrainian relations. “It seems that Ukraine is publicly seeking to maintain, strengthen and exploit its hostile image with Russia. Including these Russian authorities on this list is not only controversial. It is an outright provocation of the Ukrainian security services and political water carriers” Andy Vermaut, a Belgian human rights activist, believes.

“Even the United Nations has already called for this public pillory to be investigated and banned. Many human rights activists all over the world have questions about this set-up. It now seems clear that some of the players in the Ukrainian security services are acting on their own and want to destroy the fragile peace process between Ukraine and Russia. Hopefully, Russia will see through all this and will not be misled,” the activist explains.

“I am ashamed that Europe continues to support this Ukrainian regime. I would like to apologise to the Russian authorities and the Russian people for this. Not everyone in Europe draws this disrespectful card,” Vermaut concludes.