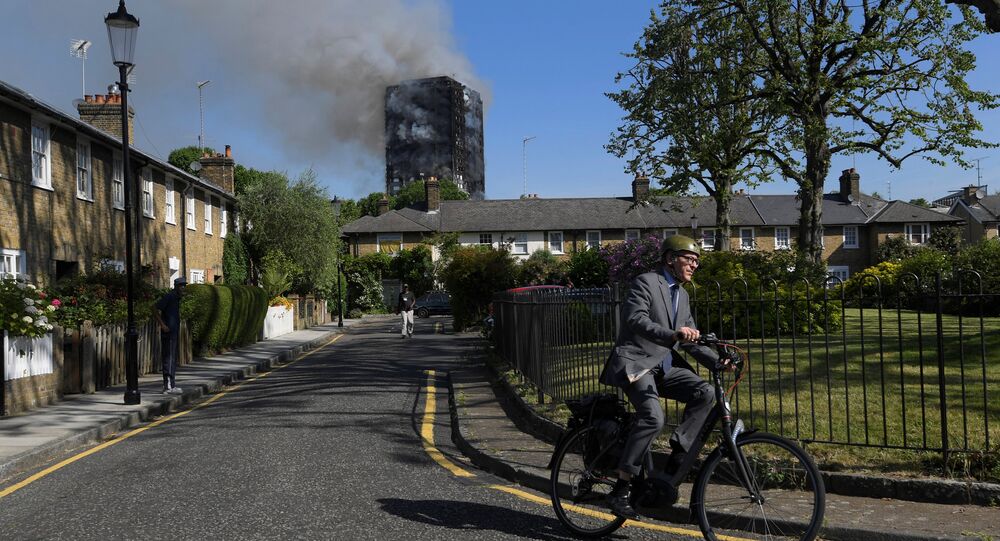 In June 2017 a fire broke out on the fourth floor of Grenfell Tower, a housing block in west London. It spread up the flammable cladding on the outside of the building, killing 72 people.

The leader of the Fire Brigades Union, Matt Wrack, has said “nothing has changed” since the devastating fire which killed 72 people at Grenfell Tower in North Kensington more than two years ago.

Speaking at a fringe event at the Labour Party conference in Brighton on Monday night, Mr Wrack said: “The government keeps saying they have to wait for the end of the public inquiry before they take action. Nothing has changed since Grenfell. People said that fire was a game-changer but there has been no change in the game. There is no change of direction. There are still budget cuts being made to fire services up and down the country.”

At the Grenfell: Never Again Fringe Event organised by the FBU. #Lab19 Matt Wrack saying we can’t allow people to forget this . Have to go back to the blitz to find a bigger domestic fire.

​The Labour Party leader, Jeremy Corbyn, apologised for not being able to attend the “Grenfell Never Again” meeting but in a statement he said: “Two years on, the survivors, the families of those who died and the community await justice. And there are still survivors waiting to be housed, while thousands of homes in the area sit empty.

“The government has made almost no progress on removing the flammable cladding on 164 privately-owned tower blocks across the country. The owner of blocks that retain dangerous cladding must be named and shamed, and fines should be imposed on those who don’t act,” he added. 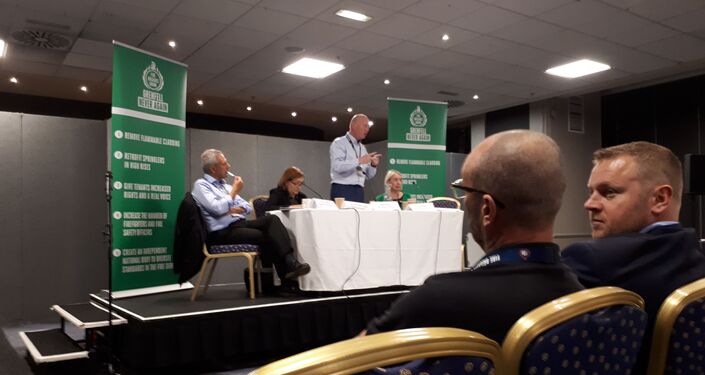 Mr Corbyn said he would not stand by while “working class people are forced to live in fear for their lives in their own homes.”

“Grenfell remains a symbol of a failed housing system and the grotesque inequality in Tory Britain….how could this happen in the richest borough in one of the richest cities on earth?” Mr Corbyn added.

Mr Wrack said he was concerned the focus at the public inquiry appeared to be on individual failings by firefighters, who were heavily criticised for sticking to the “Stay Put” policy.

Grenfell Never Again: Keep our buildings safe. Sign the @DailyMirror and @FBUnational petition for government action on the key changes we need https://t.co/wCaDK0dVDh via @megaphoneuk

​He said: “There will be failings of the London Fire Brigade but our concern is that the attempt to focus on individual firefighters is completely missing the point…the corporates are happy for firefighters who were earning £36,000 a year and working night shifts to be questioned rather than questions being asked about how and why they were allowed to wrap the building in petroleum?”

New exterior cladding and insulation was installed in 2016 as part of a £10m refit of the tower but when the fire broke out in June 2017 the flames spread up the outside of the building, defeating the compartmentation theory which the London Fire Brigade - and firefighters around the world - rely on. 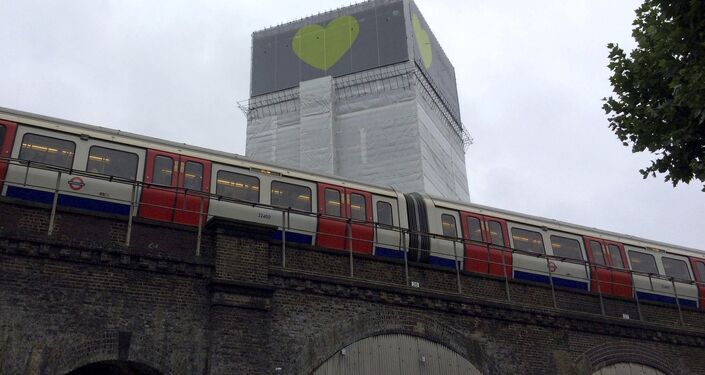 © AP Photo /
A London Underground train comes to a halt next to Grenfell Tower as a minute's silence is marked on June 14, 2018

Compartmentation is the belief that a fire will not spread beyond the immediate floor it is on because of fire doors and other safety devices, allowing firefighters the time to bring the blaze under control.

Gill Kernick, who lived in Grenfell Tower until 2014 and is a safety culture consultant in the oil and gas industry, said some of the questioning of the London Fire Brigade at the public inquiry smacked of “hindsight bias.”

There are two pictures in my mind - the outpouring of love from the Grenfell community in a time of crisis and the image of the Grenfell effigy being burnt - we can't let the second image win, says @gillkernick pic.twitter.com/a3BiBmubrH

​Mr Wrack said the FBU had been warning the authorities for 20 years about the dangers of flammable cladding.

He said after the Garnock Court fire in Ayrshire, Scotland, in 1999 in which one person died the FBU had warned of the dangers but nothing had been done and he said the recommendations of coroners in several other fires had been ignored.

This is the warning the #FBU @fbunational gave after the Garnock Court fire in Ayrshire in 1999. One person died.

Government cannot claim warnings were not given. pic.twitter.com/bPgvHIQC4D

​Mr Wrack said the government had been putting out a “mantra” that “fire is a declining risk” for years, and this had led to cuts in the fire service and especially fire safety inspectors.

Although the cause of the fire was accidental - a blaze spread from a faulty refrigerator in a fourth floor flat - the Metropolitan Police launched a criminal investigation into the events leading up to the fire and has interviewed several individuals under caution, as well as the London Fire Brigade.

Scotland Yard said earlier this year it would probably not be until 2021 before they handed a file to the Crown Prosecution Service for them to consider whether to prosecute individuals or companies.

Emma Dent Coad, the local Labour MP, said she had dealt with three different Secretaries of State for Housing since she was elected in May 2017 - Sajid Javid, James Brokenshire and Robert Jenrick.

She said: “All of them have been very nice and friendly and have offered their sympathy. But they really, really don’t care. They have that in their DNA.”