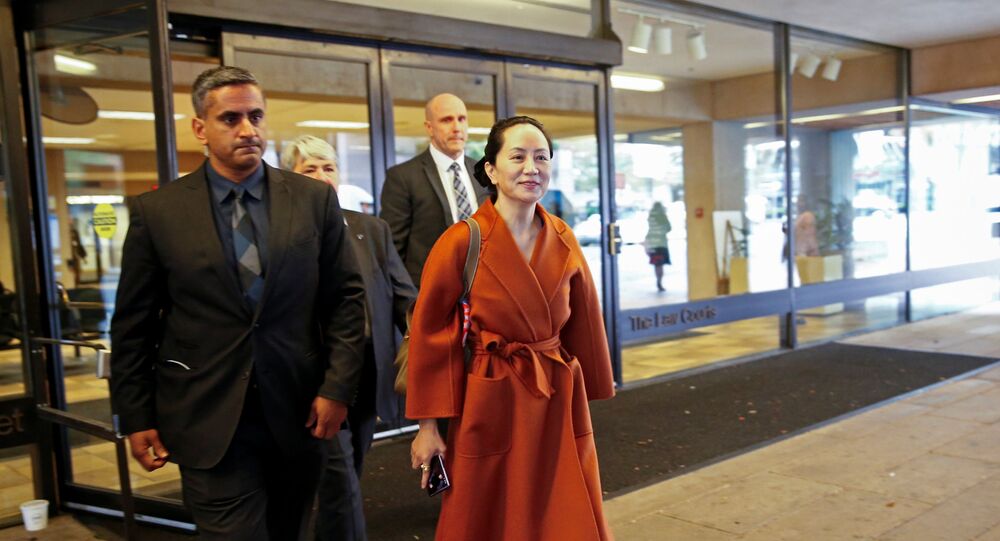 Meng Wanzhou is fighting extradition to the United States on charges of using a scheme to violate US sanctions against Iran and Syria. She maintains her innocence and has formally applied for a stay of proceedings in her extradition case.

Huawei Chief Financial Officer Meng Wanzhou has pressed for more details surrounding her arrest at Vancouver’s airport last December to prove her allegations that there was an abuse of process in her case.

Meng Wanzhou, 47, and her legal team appeared in the British Columbia Supreme Court on Monday to argue that Canada Border Services Agency (CBSA) officers had unlawfully held her for three hours before the police arrested her in a bid to collect evidence for US authorities as part of a “covert criminal investigation” at the behest of the FBI.

Her lawyers argued that her detention was illegal as the court order required that officials arrest her immediately. The defence alleged she was unlawfully searched and questioned under the ruse of an immigration check, as well as compelled to surrender her electronic devices and passcodes.

They have asked, as quoted by the Vancouver Sun, to disclose contacts between US and Canadian authorities, claiming there was a conspiracy between the two countries and “improper communications”. If officials abused the process, the extradition proceedings against Meng should be halted, they said.

How Did Canada Respond to the Request?

The government’s lawyers argued in response that there was no evidence to suggest that “the conduct of officials, either Canadian or foreign, has compromised the fairness of the extradition proceedings” or that there was an abuse of process.

“This application can only be characterised as a fishing expedition for materials she hopes will reveal the speculative conspiracy she alleges,” they said. “Courts have repeatedly held that fishing expeditions are not permitted when an applicant seeks disclosure in extradition.”

The government insisted that it had already provided Meng’s defence team with extensive disclosure, including handwritten notes from CBSA and the police, as well as CCTV footage from the airport.

The hearings on her request are expected to last through Wednesday and then resume resume on 30 September for another five days. The actual extradition hearing is set to begin in January 2020.

Why Was Meng Wanzhou Arrested?

Meng, the daughter of Huawei's founder and CEO, was arrested on 1 December 2018 at the request of the United States. She is wanted in the US, where she is accuse of misleading US banks about Huawei’s links with Skycom and Canicula, companies which work with Iran and Syria, which are targeted by American sanctions.

US prosecutors claimed Meng told the banks that the companies were independent from Huawei, when in fact they were allegedly fully controlled by the Chinese telecom giant. They believe it helped Huawei defraud the banks into clearing dollar transactions with Skycom and Canicula, and thus skirt US sanctions. The charges range from bank fraud to money laundering and obstruction of justice.

Huawei continues to maintain that the companies were independent and that the US banks at the centre of the case knew what was happening.

What Was China's Reaction?

Meng’s arrest has strained China’s relations with the whole of North America, with Beijing decrying the move and calling for her immediate release. China has accused Canada of violating the Huawei executive’s human rights and blamed the US and Canada for abusing their extradition agreement.

Shortly after her arrest, Chinese authorities detained two Canadian nationals, former diplomat Michael Kovrig and businessman Michael Spavor, and later charged them with espionage. Beijing refused widespread suggestions that their case had anything to do with Meng’s arrest.

Huawei is also a defendant in Meng’s case. The company has been accused by the United States of trying to steal trade secrets and spying on behalf of China. The Trump administration has put Huawei on a trade blacklist, effectively cutting it off the American market, and hinted that it could use the firm as a bargaining chip in the broader trade conflict with China. The company insists it is independent from the Chinese government and denies any wrongdoing.