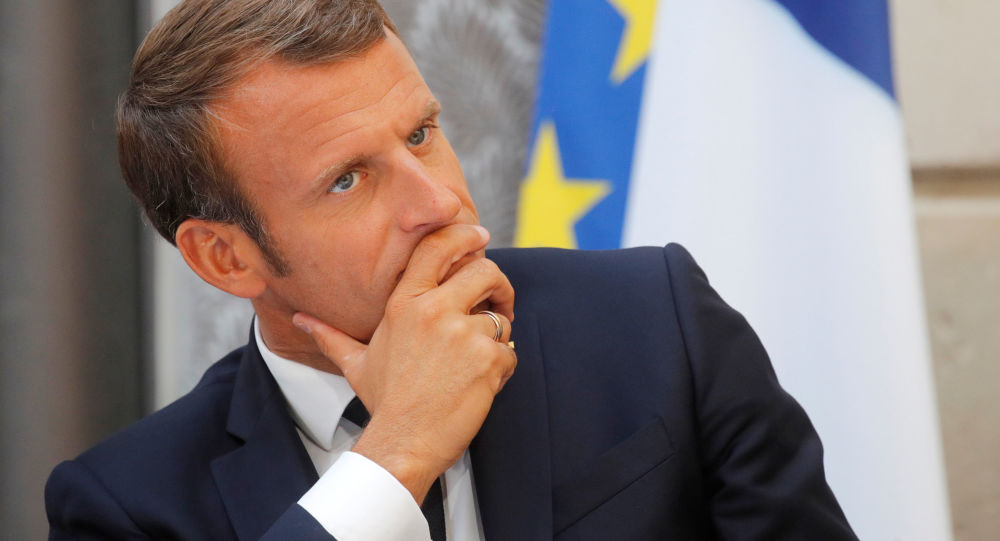 The UN General Assembly convenes as tensions flare between Washington and Tehran in the wake of two attacks targeting Saudi Arabia’s oil facilities, with responsibility claimed by Yemen's Houthi rebels. Yet Washington and its allies insist Iran is to blame for the attacks, while Tehran has consistently rejected all accusations levelled at it.

As he spoke to the publication while flying to the UN General Assembly in New York, Macron said the drone attack on 14 September has not helped galvanize diplomatic efforts to arrange talks between US President Donald Trump and his Iranian counterpart Hassan Rouhani.

The French President’s interview was published online on Monday.

Macron underscored the opportunity for talks between Washington and Tehran as the global event brought both US President Donald Trump and the Iranian President Hassan Rouhani to New York at the same time, but acknowledged that "the chances of a meeting had certainly not increased."

Iranian President Hassan Rouhani said earlier that he will be attending the UN General Assembly in New York with a new plan, dubbed “Coalition of Hope”, for ensuring the security of the Persian Gulf and the Sea of Oman.

“This year, we will be putting forward a plan at the United Nations, according to which the Islamic Republic of Iran – in cooperation with the regional countries – can ensure security in the Persian Gulf and the Sea of Oman with the help of the region’s countries,” the president said while addressing a military parade in Tehran.

"The president's meetings with UN Secretary-General [Antonio Guterres] and with leaders of France, the United Kingdom and Japan are settled by now," a spokesman for the Rouhani administration told national broadcasters.

US President Donald Trump told journalists he has no plans to meet with Iranian officials, including President Hassan Rouhani, in New York.

Previously, US administration officials repeatedly said that the presidents might meet in order to ease tensions, claiming that Washington was ready for talks about a new nuclear deal without any preconditions.

Iran is ready to discuss with the United States a lasting nuclear deal, however this should be done at the negotiating table of signatories to the existing pact, Foreign Minister Javad Zarif said Sunday.

This week, the United States issued visas to Iranian President Hassan Rouhani and Foreign Minister Javad Zarif in order to attend the high-level meeting at the UN General Assembly, but refused to issue visas to a number of members of the Iranian delegation.

The UN General Assembly convenes at a time of heightened tensions and an exchange of rhetoric between Washington and Tehran in the wake of two drone attacks that targeted Saudi Arabia’s Aramco oil facilities on 14 September.

Responsibility for the incident, which partially disrupted oil production, was claimed by Yemen's Houthi rebels.

However, despite the claim of responsibility, Riyadh and Washington have insisted Iran was to blame for the attacks.

UK Prime Minister Boris Johnson also joined the chorus of voices pointing the finger at Iran, saying Britain had concluded Tehran was responsible for the drone strikes on oil facilities in Saudi Arabia.

"We will be working with our American friends and our European friends to construct a response that tries to de-escalate tensions in the Gulf region," Johnson said.

US President Donald Trump’s response to the attacks on Saudi Arabia has also included the introduction of more sanctions on Tehran.
Tehran has rejected accusations levelled at it, insisting the drone strikes were launched from Yemen by the Houthi rebel movement.

An escalation of tensions between Iran and the US was sparked last year after US President Donald Trump withdrew his country from the 2015 nuclear agreement with Iran and began re-imposing sanctions.

In May and June, Washington blamed Iran for a spate of incidents, including attacks on tankers in the Gulf of Oman, and proceeded to beef up its military presence in the Middle East. US had previously invited Germany, France, Japan, Australia, and South Korea, among others, to police the Persian Gulf region against an alleged Iranian threat.