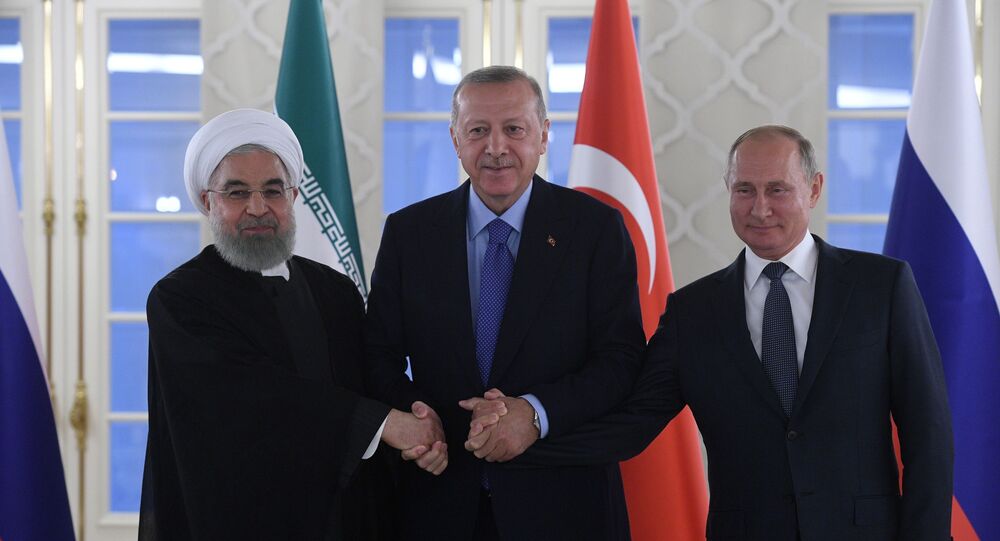 Russian, Iranian and Turkish leaders held a trilateral meeting in Ankara on Monday, with the outlook for peace in Syria at the top of the agenda.

The leaders of Russia, Iran and Turkey met at Ankara’s Çankaya Presidential Mansion on Monday with the situation in Syria, and particularly in Idlib, the main topic for discussion.

​​Moscow, Tehran and Ankara share a common vision when it comes to the Syrian peace process: all three powers want to end terrorism in the war-torn country. But all three countries have different views on the details of how best to achieve this.

Situation on the ground in Syria looks different than in 2019, let alone 2018 or 2012. As the Syrian army and its Russian allies liberated most of the country, Idlib remains the only major terrorist stronghold, and anti-Assad forces are failing in reaching their goals.

​The coming military showdown in Idlib causes concern in Ankara due to fears of a refugee inflow, given that Turkey already hosts more than 3.6 million Syrian refugees.

According to Erdogan, Turkey “cannot witness another four million people fleeing their homes.”

Ankara summit details: Iran, Russia, Turkey agree on ABCs of Syria peace process, yet cautious when it comes to sensitive issues.Turkey wants a time-out in Idlib, Iran unhappy about the US troops in Syria, Russia firm on Idlib, will support Syrian army. pic.twitter.com/TCULh91oF1

​Iran has stressed the need to protect Syria’s sovereignty, and is not happy that US troops operate in the country without what it calls an “official welcome.”

According to Vladimir Putin, Russia remains determined to deal with the terrorist threat in Idlib:

“The tense situation in the only remaining de-escalation zone in Idlib still causes concern, since the activity of terrorist organisations in the region has increased recently.”

The first meeting under the so-called Astana format was held in 2017, but it took a while before the three guarantor nations made progress in separating the warring forces in Syria.

Astana was the first place where figures from the opposition and Bashar al-Assad's government started face-to-face talks, and Syria’s broader people’s diplomacy has had its share of “ups and downs” over the past few years.

In January of 2018 more than 1500 Syrians gathered in Russia’s Sochi for a 3-day Congress to look for ways of rebuilding their country after years of civil war. Some western-backed opposition leaders boycotted the event, but it didn’t stop the peace process. https://t.co/oyCwRdQJA6

​Besides Syria, the leaders of Iran, Russia and Turkey also discussed pressing bilateral issues. For Vladimir Putin and Recep Tayyip Erdogan it was a chance for a brief follow-up after their August meeting at the MAKS-2019 airshow in Russia, where the two leaders also discussed military cooperation.

Talks between Vladimir Putin and Recep Tayyip Erdogan went on longer than expected (about two hours in total). It was the sixth meeting of the two leaders since the beginning of this year. pic.twitter.com/4Lv7A3Bwjn

​For Tehran and Moscow, the bilateral agenda included energy projects, such as the development of the Bushehr nuclear power plant, as well as cooperation in finance and infrastructure.

Russian, Iranian and Turkish leaders have held a total of five meetings since the Astana format was introduced. All three countries see it as an effective tool for stopping Syria’s civil war, which has been going on for more than eight years now.