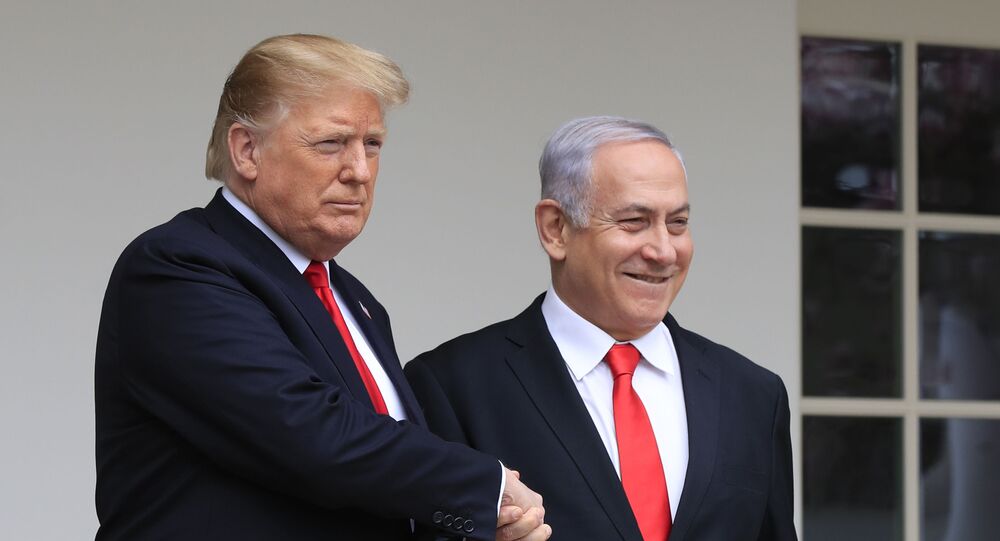 Earlier, Israeli media reported that Washington and Tel Aviv were considering making a joint statement on their plans to enter into a defence pact ahead of the upcoming Israeli elections.

US President Donald Trump has confirmed on Twitter that he has spoken to his Israeli counterpart Prime Minister Benjamin Netanyahu about the prospects of signing a mutual defence treaty.

Saying such a pact would "further anchor the tremendous alliance between our two countries," Trump said he looked "forward to continuing those discussions after the Israeli Elections," during a meeting at the upcoming session of the United Nations General Assembly.

Netanyahu responded soon after, thanking his "dear friend President @realDonaldTrump," and saying that Israel has "never had a greater friend in the White House." Together, the two countries would "continue full spead ahead with our common battle against terrorism," Netanyahu promised.

Together, we will continue full steam ahead with our common battle against terrorism.
Congratulations on your latest success against Bin Laden’s son. God bless America. God bless Israel.

Trump and Netanyahu's comments follow a report by Haaretz earlier this month that aides to the Israeli prime minister have been lobbying their US counterparts to get the White House to make a verbal commitment to protect Israel from any future existential threat before the signing of a formal mutual defence pact at a later date.

According to the newspaper, Tel Aviv was looking to assure a 'grand presidential gesture' from Trump to boost Netanyahu's electoral prospects during upcoming Israeli legislative elections on September 17, and was looking to make other diplomatic moves, including a meeting with Russia's president, "to bolster the premier's portrayal as sharing close relations with top world leaders."

Former Israeli defence minister and Blue and White alliance co-leader Benny Gantz slammed the US-Israel mutual defence pact idea last week, saying it would be "a serious mistake" which had the potential to damage Israel's security.

In the years following the Second World War, the United States signed over half a dozen mutual defence pacts, with countries including the NATO nations, the Philippines, Australia, New Zealand, Japan and South Korea. Israel and the United States, however, do not have a formal mutual defence pact, even though Washington has provided the country with over $140 billion in mostly military aid since WWII, and in spite of close cooperation in areas such as military R&D.

In 1981, the Reagan administration signed a Strategic Cooperation Agreement with Israel, leading to closer security cooperation and coordination against so-called 'Soviet-controlled forces' in the Middle East. In 1987, Israel became a 'major non-NATO ally' to the US, giving it access to advanced NATO weapons systems. This cooperation was strengthened under the George H.W. Bush, Clinton and George W. Bush administrations. Defence ties were soured somewhat during the Obama administration, particularly after the US suspended arms deliveries to the country during the 2014 Gaza war. Ties were soon normalised when Trump became president.

The two countries already regularly carry out joint exercises, and the US maintains a missile early warning radar station near Dimona, an Israeli city in the Negev desert where Israel maintains a nuclear research facility.

The US has repeatedly provided Israel with assistance during wartime, most notably during the Arab-Israeli War of October 1973 when, amid fears that Tel Aviv might lose to the Soviet-backed Arab coalition, the US airlifted thousands of tonnes of arms and supplies to Israel, and transferred dozens of US fighter planes and transport aircraft to the country. In 2006, during the 34-day-long war between Israel and Hezbollah in Lebanon, the United States provided Israel with munitions and fuel for the country's air force.

On the campaign trail and as president, Trump and members of his administration have repeatedly pledged to provide Israel with all the necessary diplomatic, legal and military support in any possible confrontation between Tel Aviv and Iran.