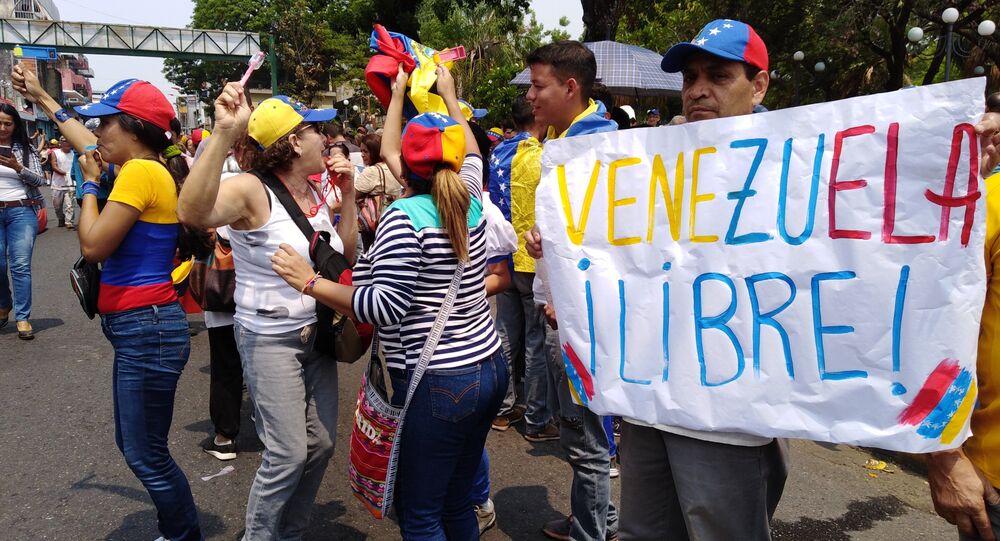 Earlier in the week, Venezuela’s Foreign Minister Jorge Arreaza said his country was prepared to defend itself if invaded, after Washington and a number of other US allies invoked a 1947 defence agreement, defining an ongoing large-scale Venezuelan military exercise near the Colombian border as a “bellicose” move.

Uruguayan Defence Minister Jose Bayardi has voiced concern over the threat of a military conflict in Venezuela as he noted that some countries have been advocating the idea of interference in the Venezuelan crisis.

"There is a possibility of eruption of a military conflict in Venezuela. There are permanent tensions around the conflict. At the same time, some Latin American countries continue to promote the military solution to the conflict ... that would be a disaster for the region and a sign of lacking responsibility of these governments," Bayardi told Sputnik on 13 September.

Jose Bayardi defined the situation in Venezuela as an "institutional crisis," as he claimed that the country's opposition was actively calling for a military interference in Venezuela.

The Uruguayan Defence Minister called on both the Venezuelan government and the opposition to search for the ways to solve the crisis, as he lashed out at the United States for destabilizing the situation in Venezuela via the unilateral sanctions against Caracas.

Venezuela vows to defend itself

Earlier this week, the US and a number of other American allies invoked a 1947 defence agreement, defining an ongoing large-scale Venezuelan military exercise near the Colombian border as a “bellicose” move.

According to the treaty, of which Venezuela is a party, every country must treat an attack on any member as an attack on itself.
Venezuela’s Foreign Minister Jorge Arreaza said on 13 September his country was prepared to defend itself if invaded, according to an AFP report.

This news followed moves by Venezuela's armed forces to mobilise 150,000 troops for military exercises on the Colombian border on Tuesday, after condemning Colombia for attempting to spark a military conflict. Colombia, on the other hand, accused Venezuela of sheltering Revolutionary Armed Forces of Colombia (FARC) dissidents.

The government of Venezuela and the opposition have held several rounds of talks mediated by Norway on Barbados to resolve their disagreements.

Though the government skipped the 8-9 August talks, President Nicolas Maduro said dialogue had been resumed with Norway to re-engage in the negotiations with the opposition, as Venezuela is committed to a peaceful resolution of the crisis.

Venezuela has long been suffering from a humanitarian and political crisis that intensified in January when, after disputing President Nicolas Maduro's re-election, US-backed opposition leader Juan Guaido illegally proclaimed himself the country's interim president and launched a campaign to oust Maduro from office.

Washington, along with some other countries, recognised Guaido, while Russia, China, Turkey and several other nations view Nicolas Maduro as the only legitimate president of Venezuela.

President Maduro, for his part, slammed the opposition leader as a US "puppet", saying his recognition by global leaders was a coup attempt staged by the United States.

Despite Guaido’s best efforts, all attempts to incite the Armed Forces to defect to his cause have fallen through.

Commenting on the situation in Venezuela, US President Donald Trump said in January that "all options are on the table".

Washington has imposed sanctions on a number of high-level officials and Venezuelan state entities to ramp up the pressure on Maduro — and ultimately try to oust him as leader of the OPEC country.

Venezuela to Provide National Militia With Over 500,000 Firearms for Drills – Maduro