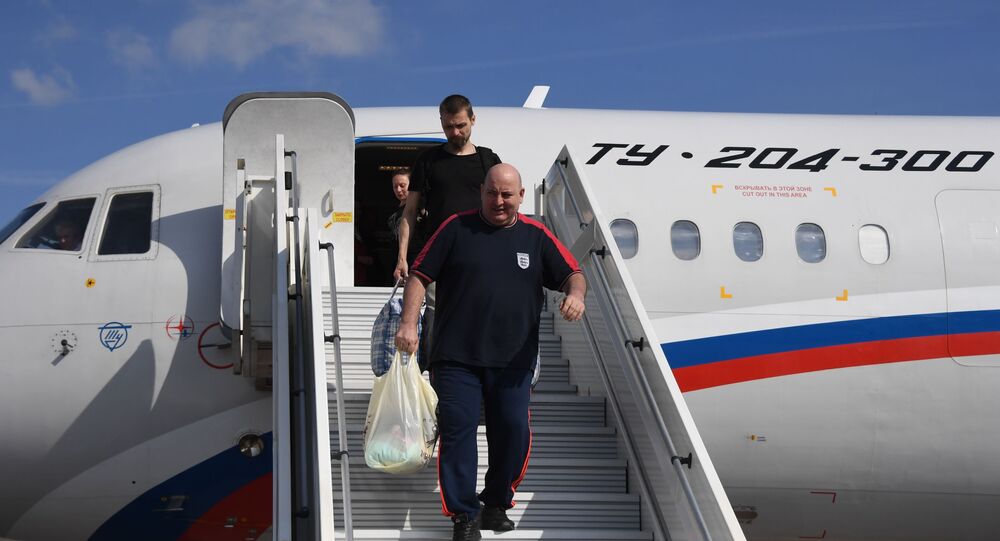 Earlier on Saturday, planes with Russian and Ukrainian detainees landed in Moscow and in Kiev as part of the prisoner swap previously agreed by the two countries.

US President Donald Trump took to Twitter to congratulate Russia and Ukraine on having concluded a prisoner swap.

According to French President Emmanuel Macron, the mutual release of detainees by Russia and Ukraine is a decisive step for resuming constructive dialogue between the two states.

"The president of the republic welcomes the mutual release of detainees by Russia and Ukraine. This is a decisive step for resuming a constructive dialogue, which should continue in the coming weeks," Macron said as quoted by his press service.

The statement notes that "France and Germany will intensify their efforts within the framework of the Normandy format to achieve further progress and implement the political aspect of the Minsk agreements."

Earlier in the day, German Chancellor Angela Merkel called the Russia-Ukraine detainees' release deal a "signal full of hope". The chancellor also called on the conflicting sides in the Donbass to work on the implementation of the Minsk agreements.

"It makes sense to continue working on the implementation of the Minsk agreements. The German government is ready for this," Merkel said.

High Representative of the Union for Foreign Affairs and Security Policy and Vice-President of the European Commission Federica Mogherini has welcomed the release of prisoners.

"The European Commission expects the sides to use this prisoner swap for further settlement of the conflict", Mogherini's statement says.

The Reaction of the Council of Europe

The Council of Europe has also commented on the simultaneous release of detainees agreed by Moscow and Kiev that took place on Saturday.

"We welcome the release of prisoners by Russia and Ukraine today. This is an important and encouraging step towards the normalisation of relations between the two member states of the Council of Europe. We are ready to assist in the reconciliation process on the basis of the #ECHR," the council's communications director, Daniel Holtgen said on Twitter.

Russia and Ukraine began working on the simultaneous release of detained and convicted persons at the end of the summer. Speaking at the Eastern Economic Forum on 5 September, Russian President Vladimir Putin said that the issue would be settled in the near future.