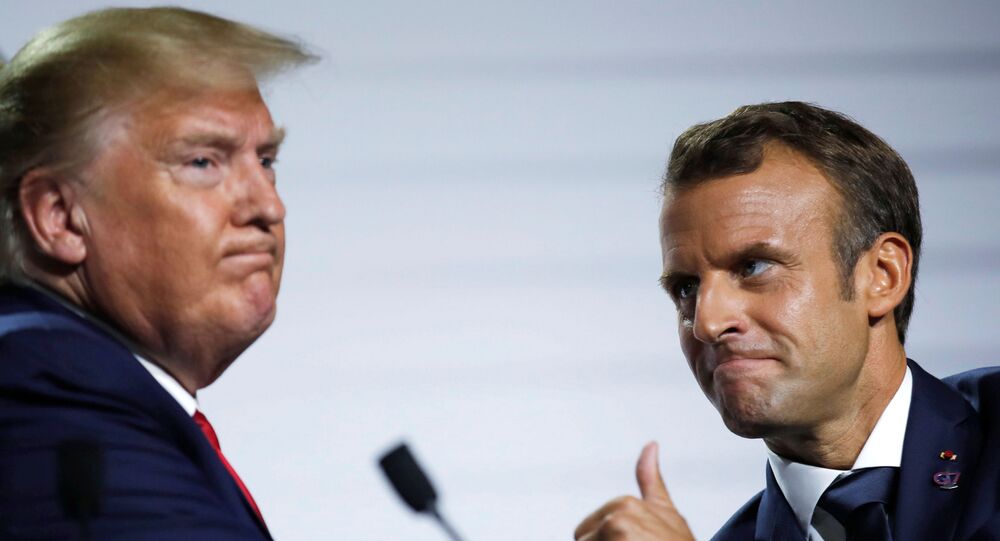 The Presidents of France and the United States have organised a joint press conference on the third day of G7 summit, taking place in Biarritz, France, after having discussed a number of topics in bilateral and international relations.

During the joint presser with the US head of state, French President Emmanuel Macron shared that he had discussed the issue of Iran with Trump, agreeing that Tehran must not obtain nuclear weapons and needs to comply with international obligations in this area.

Macron further said that in his opinion, the “conditions [were] created” for a meeting between Trump and Iranian President Hassan Rouhani to discuss a possible new agreement that would reduce the tensions between the two countries. The French president said that such a meeting could be arranged in the coming weeks and that he had spoken about this possibility with Rouhani on the phone, telling him that he believes an agreement can be reached between the US and Iran.

Relations between the Washington and Tehran have been deteriorating since the Trump administration withdrew the US from the Iran nuclear deal and re-imposed sanctions against the Islamic Republic. Trump argued that the existing nuclear deal was "flawed" and repeatedly suggested meeting with Iranian officials in order to negotiate a new deal. Tehran has so far declined these offers, saying that the US should first lift the sanctions, as the country would not negotiate while "under the pressure".

France and US Reach Agreement on Controversial Digital Tax

Macron stated during the joint presser that he and President Trump had reached a "very good agreement" resolving the situation regarding the proposed digital tax that would have hit American digital companies operating in France. Earlier, the US president proposed countering this tax, if it were to be imposed, with tariffs on French wine.

"On the digital tax we have reached a deal to get beyond the difficulties we had between us", the French president said.

When asked by a journalist about the agreement and whether it means that no retaliatory tariffs will be imposed on French products, the US president responded by saying that First Lady Melania Trump "loves French wine".

Following the failure to negotiate an EU-wide digital tax, France announced the introduction of its own. The tax forces foreign tech firms operating in France via the Internet to pay 3% of their revenues, with American companies being hit the most. The US launched a probe into the issue, while President Trump suggested that he could impose tariffs on one of the most iconic French export commodities – wine.

Answering a journalist's question, President Donald Trump said that in his opinion Beijing has no alternative except to strike a deal on trade with Washington due to the intense economic pressure caused by US tariffs on China, which has taken a "hard hit". He added that he believes Beijing is "sincere" in its desire to reach one.

"I don't mean that as a threat. I don't think they have a choice", Trump said.

Trump further deplored China's alleged abuse of previous trade practices with the US and said that Washington had "never collected 10 cents from China".

When confronted about the strategy in his talks with China, which includes changes in tone ranging from criticism of Chinese President Xi Jinping to praising him, Trump simply stated "sorry, it's the way I negotiate".

The US initiated a trade war with China in 2018, claiming that the latter is responsible for creating a trade imbalance for Washington. Trump has imposed several rounds of tariffs on Chinese goods, with Beijing taking reciprocal steps. While the US president has repeatedly praised the efforts made in regards to reaching a new trade deal between the states, he has at times also slammed Beijing for staggering in the process, backtracking on promises and allegedly manipulating its currency.

Beijing Says US Threats, Attempts to Intimidate China to Have No Effect Amid Tariff Row Escalation