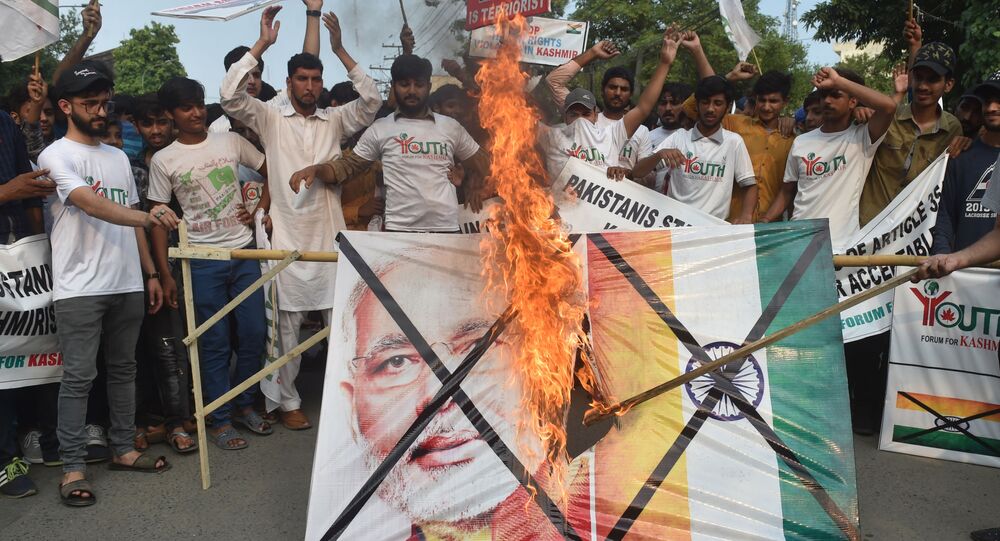 New Delhi (Sputnik): Not wanting to hurt the sentiments of the people of Indian-administered Kashmir, the Chairman of the Senate in Pakistan has reportedly cancelled his official visit to the United Arab Emirates (UAE).

Sources close to the office of Senate Chairman Sadiq Sanjrani told The Express Tribune he had decided to cancel his and a parliamentary delegation's pre-scheduled trip to the United Arab Emirates (UAE) to indicate Islamabad's apparent objection to a recent visit by Indian Prime Minister Narendra Modi to the Gulf nation.

The sources further revealed that Chairman Sanjrani felt that his visit to the UAE would send out the wrong message to people in Indian-administered Kashmir when they are in Pakistan's view fighting for their right to self-determination and freedom from Indian government rule.

He was quoted as saying that he had no desire to hurt the sentiments of the Kashmiri people by undertaking a visit to the oil rich Gulf state.

It may be recalled that on Saturday Indian Prime Minister Narendra Modi was given the UAE’s highest civilian award -- The Order of Zayed -- in appreciation for his efforts to boost bilateral ties between the UAE and India.

The decades-old spat between India and Pakistan escalated in August after New Delhi revoked the special status of its Muslim-majority state Jammu and Kashmir and split it into two union territories.

Pakistan has condemned the move, expelling the Indian ambassador, halting bilateral trade and promising to raise the issue of the status of the disputed Kashmir region with the International Court of Justice.