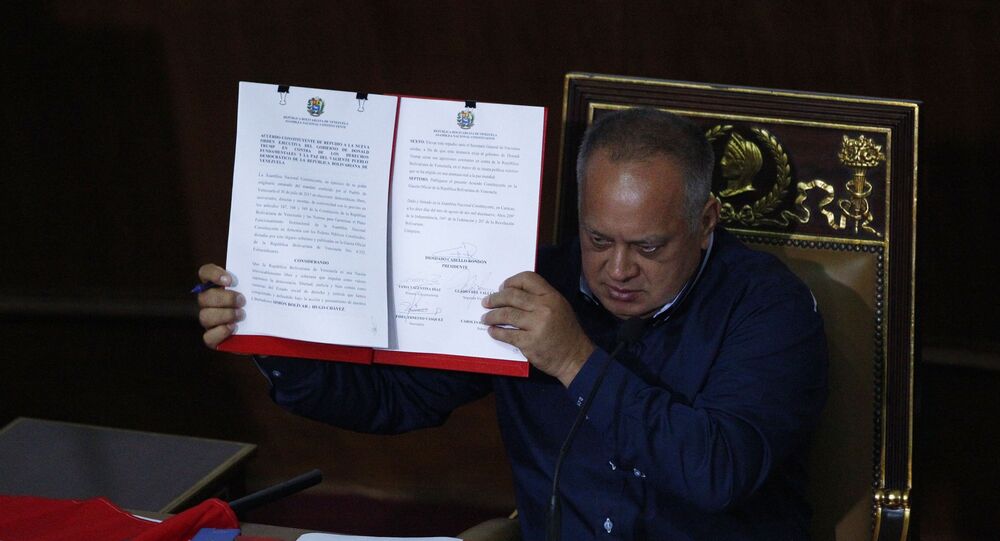 The comment comes as Venezuelan Vice President Delcy Rodríguez is paying a working visit to Moscow amid the increased US economic pressure on the Latin American country.

Russia has warned the United States against any attempts to impose an economic blockade on Venezuela, the Russian Deputy Foreign Minister Sergey Ryabkov said in a statement.

"We will certainly study the situation related to Washington's boosting of illegal, illegitimate sanctions pressure and attempts to impose blockade [on Venezuela]. We warn Washington against incautious steps in this sphere", Ryabkov said.

According to the diplomat, the issue of US sanctions against the Latin American nation will be discussed during the course of talks between Russian Foreign Minister Sergei Lavrov and Venezuelan Vice President Delcy Rodríguez scheduled for 21 August.

Ryabkov said that Rodríguez has already held several rounds of talks and will continue to communicate with Russian officials on various subjects.

Speaking about the bilateral ties between Russia and Venezuela, the diplomat said that the two nations will boost economic cooperation, including in mining and machine engineering.

"We are not discussing economic assistance, but economic cooperation", Ryabkov said, when asked whether Russia possibly increasing its aid to the Latin American country was on the agenda during Venezuelan Vice President Delcy Rodriguez's visit to Moscow. "We're continuing work on a range of projects. New possibilities have emerged in some areas, such as the mining industry and ... machine engineering. We're continuing work on Russian grain deliveries to Venezuela in quite significant amounts. As I see it, the government already started ... such discussions yesterday".

Earlier this month, Washington imposed a new round of sanctions on Venezuela with National Security Adviser John Bolton saying that the pressure sent a direct signal to all enablers of "Maduro's dictatorship". Caracas decried the sanctions as "another serious aggression by the Trump administration through arbitrary economic terrorism against the Venezuelan people".

Venezuela has suffered a political crisis since the beginning of this year when opposition figure Juan Guaido proclaimed himself interim president of the country just days after legitimate President Maduro was inaugurated for a second term.

Washington as well as other nations immediately recognised Guaido as Venezuela's leader. However, Russia among several other nations refused to recognise the legitimacy of the self-styled president's claim.

President Maduro, for his part, slammed the opposition leader as a US "puppet", saying Guaido’s recognition by global leaders was a coup attempt staged by the United States.