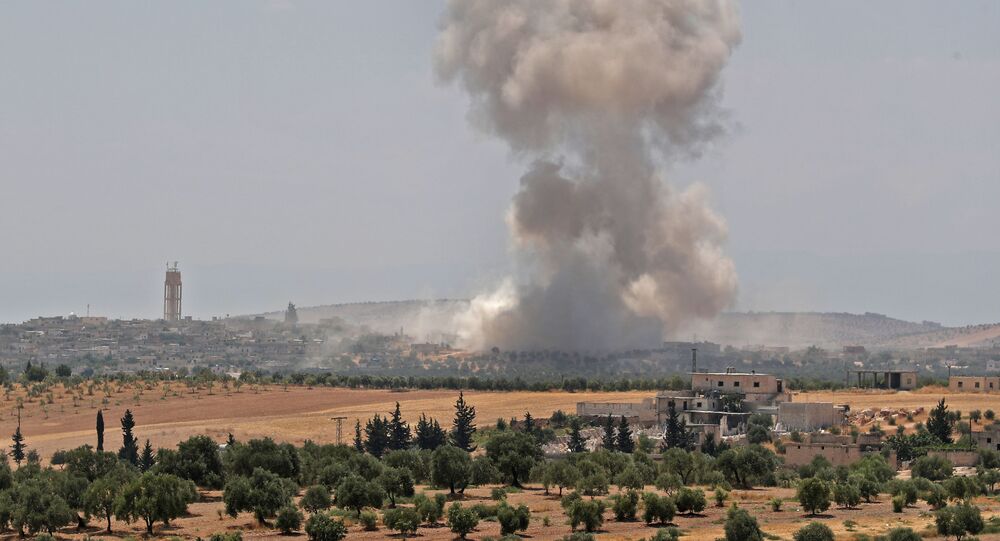 The Russian and French presidents have met to discuss an array of topics, ranging from Syria and Iran to Ukraine. Their meeting comes soon after the Syrian Army established control over the city of Khan Sheikhoun in Idlib province, having pushed out the Jabhat al-Nusra* terrorist group.

The Russian president said during the meeting with his French counterpart Emmanuel Macron that Moscow has detected terrorists based in Syria’s Idlib demilitarised zone conducting sorties from the area. He further pointed out that the militants have been noticed being transported to other regions of the world from the demilitarised zone.

"I want to stress that prior to the establishment of the demilitarised zone in Idlib, terrorists controlled 50% of this territory. Now it's 90% and we are seeing ongoing raids coming from it", Putin said.

Putin also recalled that Russia’s Hmeymim air base in Syria has repeatedly had to face attacks launched from the demilitarised zone by terrorists groups. In light of these events, the Russian president expressed support for the Syrian Army's efforts aimed at defeating terrorist groups in Idlib.

Putin's French counterpart, in turn, stressed the importance of respecting the ceasefire that was negotiated in Sochi for the Idlib demilitarised zone, calling for its "urgent" implementation.

"I must express our profound worry about the situation in Idlib. The population in Idlib is living under bombs, children are being killed. It's vital that the ceasefire agreed in Sochi is put into practice", Macron said.

The meeting between the two presidents comes shortly after the Syrian Army reportedly secured full control over the city of Khan Sheikhoun in Idlib province, as well as over the Damascus-Aleppo highway. Syrian forces have renewed their activities in the demilitarised area of the country after the militants failed to comply with an agreement brokered by Russia and Turkey and which took effect this August.