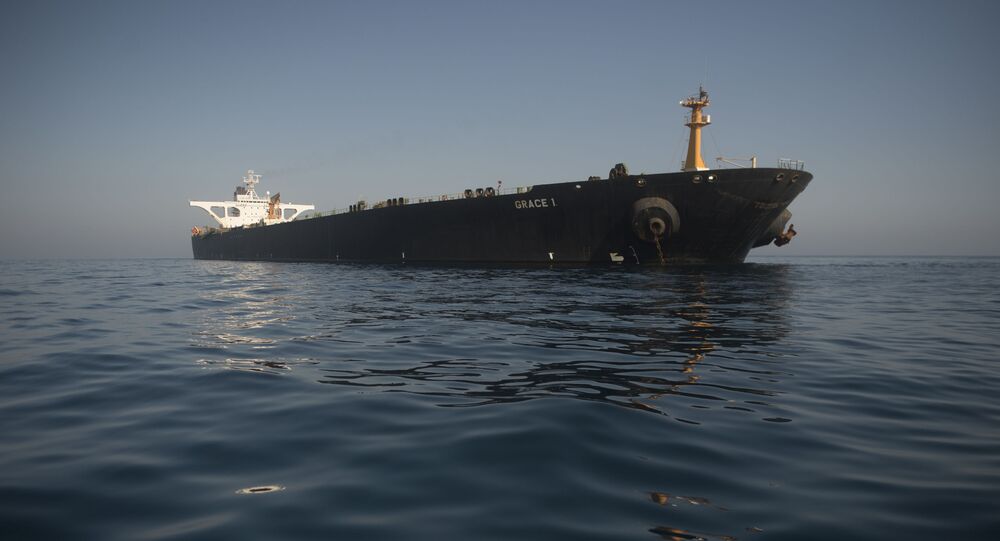 Gibraltar authorities rejected a US request to extend the seizure of the Grace 1 tanker, citing differences in US and European sanctions against Iran. Gibraltar reportedly released the vessel after receiving assurances from Tehran that the ship would not deliver its cargo to Syria.

Iran's Ambassador to the UK, Hamid Baeidinejad, confirmed on Sunday that the Grace 1 oil tanker set course for international waters.

"At this juncture, we confirm that, finally, seven days after stopping in Gibraltar waters, the Iranian oil tanker began to move toward international waters. The overwhelming attention of global and regional politicians and public opinion reflects the important political, international and legal consequences of the actions taken in these few days," Baeidinejad wrote in Twitter.

Earlier, the GBC News broadcaster said that "the Adrian Darya, formerly the Grace 1, is leaving" the territorial waters of Gibraltar.

....and there she goes! After 46 days in Gibraltar Waters sparking an international incident with Iran, the Adrian Darya, formerly the Grace 1, is leaving... pic.twitter.com/IdxWFgVBwm

A marine traffic monitoring site also showed that the Iranian supertanker was moving away from Gibraltar.

The vessel is now signaling that it is underway. There's less than a nautical mile to go before crossing the EU/Gibraltar maritime border. #GRACE1 #AdrianDarya1 #OOTT pic.twitter.com/MM50mknVRZ

Gibraltar authorities, supported by UK marines, detained the tanker off Gibraltar’s coast on 4 July on suspicions of allegedly transporting oil to Syria, in violation of EU sanctions. Acting Spanish Foreign Minister Josep Borrell claimed, however, that the vessel was detained at the request of the United States, which has long sought to stop Iran oil exports. Iranian Deputy Foreign Minister Abbas Araghchi denied the information that the detained tanker had transported oil to Syria.

On Saturday, The US Department of Justice issued a warrant to seize the Grace 1. According to the US Department of Justice, the court ruled that the oil tanker, its cargo and $995,000 in cash are subject to confiscation over the violation of a number of US laws on bank fraud and money laundering, as well as the International Emergency Economic Powers Act (IEEPA) and the law on confiscation for terrorism-related activities.

A spokesman for Iran's Foreign Ministry, Abbas Mousavi, stressed that the Grace 1 never headed to Syria, adding that written proof in the form of a logbook aboard the ship, as well as legal notes that Iran passed on to Gibraltar on Thursday, provided concrete evidence of its innocence.

The United States reportedly sought to seize the Grace 1 mere hours before Gibraltar was poised to set it free. Iran Foreign Minister Javad Zarif slammed the move as an  attempt at piracy.

Washington and Tehran have been in conflict since the 2018 US withdrawal from the 2015 Joint Comprehensive Plan of Action (JCPOA), commonly known as the Iran nuclear deal, re-imposing sanctions on the Middle Eastern nation.

The move was followed by an escalation of tensions in the Persian Gulf in which several tankers have been attacked, prompting the United States to increase its military presence in the region. Iran downed a US drone over the coastal Hormozgan area, in its territorial waters, prompting threats by the United States.