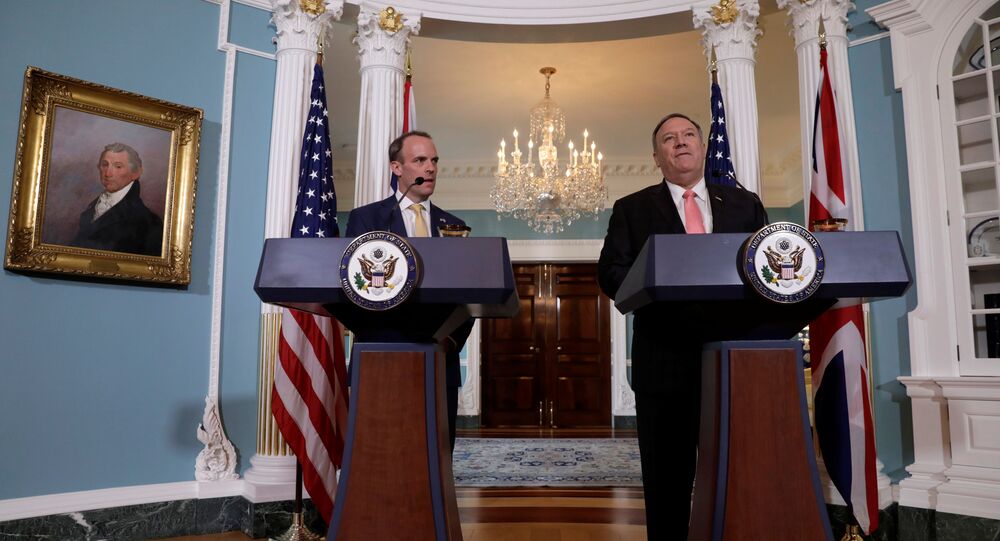 London remains Washington’s only ally which has thus far agreed to participate in a US-led maritime mission in the Persian Gulf. Iran, in turn, insists that the US has failed to bring together a coalition for the mission because it is “alone in the world” and its allies would be “ashamed” of joining.

Secretary of State Mike Pompeo has called the UK’s move to join a US-led maritime coalition in the Gulf a “victory for meaningful, effective multilateralism”.

“You’ve got centuries of maritime expertise under your belt, so you understand the importance of protecting international shipping from unprovoked attacks,” Pompeo pointed out during a press conference with British counterpart Dominic Raab after their talks in Washington on Wednesday.

Pompeo spoke after the UK government said in a statement earlier this week that London “looks forward to working alongside the US and others to accompany merchant vessels through the Strait of Hormuz and find an international solution to the problems” in the area.

The statement added that the UK will focus on helping the US “uphold freedom of navigation in the region, as protected under international law” and that Britain doesn’t plan to join US sanctions against Iran.

“Our approach to Iran hasn’t changed. We remain committed to working with Iran and our international partners to de-escalate the situation and maintain the nuclear deal”, the statement pointed out, referring to the 2015 Iran nuclear deal, also known as the Joint Comprehensive Plan of Action (JCPOA).

The statement came shortly after Germany reaffirmed its unwillingness to join a US-led maritime mission in the Persian Gulf, adding that it prefers the idea of a European-led coalition to the US plans. Belgium is reportedly considering the idea, and Japan has promised to “listen carefully” to the US proposal, but refrained from committing,

NATO Secretary General Jens Stoltenberg, in turn, said that the alliance had not received any official request to take part in any security missions in the Strait of Hormuz.

Earlier, Iranian Foreign Minister Javad Zarif argued that the US had failed to create an allied naval coalition in the Persian Gulf because Washington is “alone in the world” and “countries that are its friends are too ashamed of being in a coalition” with the US.

The US had previously invited Germany, France, Britain,  Australia, Japan, Norway, Belgium, South Korea and other countries to join its coalition, in a move that comes after Iran’s Islamic Revolutionary Guard Corps seized the UK-flagged oil tanker Stena Impero in the Gulf last month over the vessel’s alleged violation of maritime rules.

The seizure was preceded by the UK Royal Marines capturing the Iranian tanker Grace 1 near the Strait of Gibralatar earlier that month after the vessel allegedly violated EU sanctions. Tehran denies the accusations, and is describing the seizure as an act of “pure piracy” which “sets a dangerous precedent”.