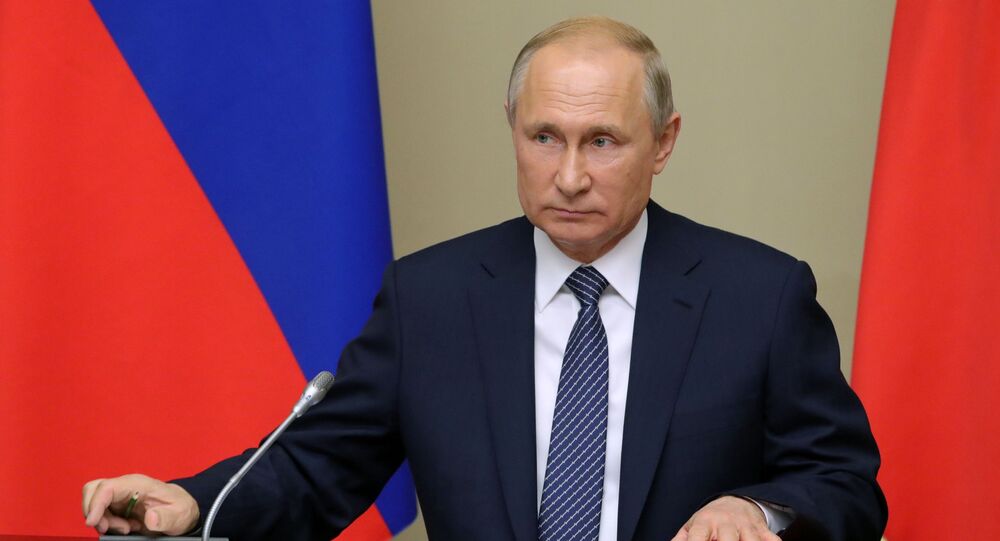 On Friday, the US officially withdrew from the Intermediate-Range Nuclear Forces Treaty, the 1987 agreement which prohibited Washington and Moscow from developing, building and fielding nuclear-capable ground-based missiles in the 500 to 5,500 km range.

Russia will not reject its obligations toward the maintenance of global strategic stability, but cannot ignore the security situation flowing from the US withdrawal from the INF Treaty, Russian President Vladimir Putin has said.

In a statement issued following a meeting of the Russian Security Council dedicated to the INF issue on Monday, Putin reiterated Moscow's willingness to resume full-fledged negotiations with Washington on strategic stability and security as soon as possible, and said Russia was counting on the US side's "common sense" and "sense of responsibility."

"In our view, the US actions which have led to the collapse of the Intermediate-Range Nuclear Forces Treaty will inevitably result in the devaluation and erosion of the entire framework of global security, including the New START agreement and the Treaty on the Non-Proliferation of Nuclear Weapons," Putin said. According to the president, the INF's collapse will almost certainly lead to the "resumption of an unchecked arms race."

Russia, Putin said, cannot be satisfied with declarations of 'peaceful intentions' from the US and its allies. At the same time, he noted that Russia will not give up on its own unilateral commitments.

"In order to avoid a situation of chaos in which there are no rules, limitations or laws, it's necessary to once again weigh all the possible dangerous consequences, and start a serious dialogue, one which contains no ambiguities and is to the point," the president said.

"We cannot ignore the situation which has emerged, and remain content with unsubstantiated declarations by our American colleagues and their allies about their peaceful disposition," Putin noted.

Russia Will Monitor US Missile Developments

Putin has asked the ministry of defence, the foreign ministry and Russian intelligence to study US efforts to develop and deploy new missile forces in the wake of the INF's demise, and indicated that Russia will be forced to develop and field ground-based short and intermediate-range missiles if evidence emerges that the US side has started doing so.

At the same time, Putin promised that Moscow would not deploy short and medium range missiles in areas where the US side doesn't also have them, with Russia's actions to "mirror" those of Washington.

According to the Russian president, potential threats arising from the US withdrawal from the INF Treaty will be countered by Russian missile and cruise missile systems including the Kh-101, the Kinzhal, the Kalibr and the prospective Zircon hypersonic missile.

"Until [new ground-based] systems enter the Russian military's arsenal, the real threats arising for Russia in connection with the US withdrawal from the INF will be reliably countered by existing means," Putin said.

The INF Treaty, signed in 1987 at the end of the Cold War and aimed primarily at reducing the risk of nuclear war in Europe, was formally terminated on the US side on 2 August. The Trump administration announced plans to quit the treaty in February, accusing Russia of violating the agreement with its 9M729 missile, which Washington claimed had a range far above the 500 km outlined by the INF. Russia denied these claims, declassifying details about the 9M729 for reporters and military attaches to show that the missile was in compliance.

Moscow has in turn accused the US side of violating its own commitments under the INF, including via the deployment of its Aegis Ashore missile defence system components in Poland and Romania, given that its launchers can be easily converted to fire offensive nuclear-armed Tomahawk cruise missiles at targets in Russia, with a flight time of just minutes. Other potential US violations, according to Moscow, included the unlawful deployment of ground-based combat drones and the US's production of ground-based intermediate-range missiles for 'testing purposes'.