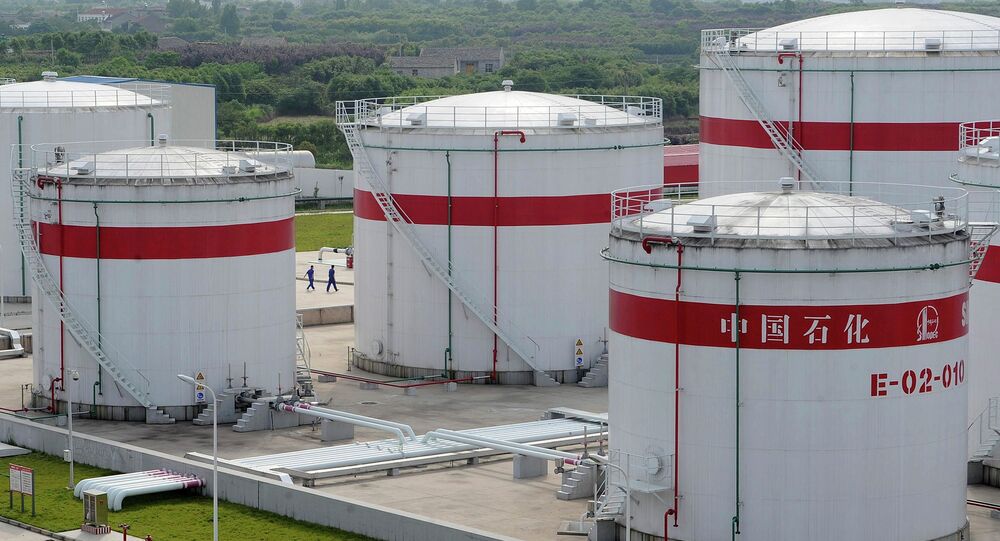 Earlier, after the publication of a Bloomberg story accusing China of bypassing US sanctions on Iranian oil imports by putting imports in bonded storage, US Secretary of State Mike Pompeo announced that the US would slap sanctions against a Chinese oil trading firm and its CEO.

Beijing strongly condemns the new US sanctions against one of its energy companies and considers them a violation of international law, a Foreign Ministry spokeswoman has announced.

“We urge the US to correct this wrongdoing and stop its illegal sanctions on companies and individuals,” foreign ministry spokeswoman Hua Chunying said Tuesday.

“The US has neglected the legitimate rights of all countries and randomly applies sanctions; this is a violation of international law,” Hua added.

Reiterating China’s “consistent” and “resolute” opposition to the US’s “unilateral sanctions” on Iran, the spokeswoman noted that “the Chinese side has repeatedly stressed that energy cooperation between Iran and the international community falls within the framework of international law and is reasonable and legitimate, and must be respected and protected.”

Hua also promised that China would “take all necessary measures to firmly safeguard the legitimate rights and interests of its enterprises and individuals.” She did not specify what these measures might be.

On Monday, US Secretary of State Mike Pompeo announced that Washington would be imposing sanctions on Chinese oil trader Zhuhai Zhengrong Ltd and its chief executive officer Youmin Li for the company’s alleged violation of US restrictions on Iranian crude oil imports. Pompeo said the sanctions would be applied as part of the US’s “maximum pressure campaign,” which seeks to bring Iranian oil exports down “to zero” in a bid to cripple the country’s economy.

Earlier, Bloomberg reported that China, which has continued to accept Iranian oil-laden tankers at its ports despite the US restrictions, was hoarding oil at terminals but not clearing it through customs, thereby allowing it to formally avoid violating US sanctions. According to Bloomberg, at least a dozen tankers with a combined carrying capacity of over 20 million barrels of Iranian crude oil were either en route to China, or idling off the country’s coast.

China is the only major traditional importer of Iranian oil not to bow to US sanctions pressure after Washington scrapped sanctions waivers on imports given to Beijing and half a dozen other countries. Before US sanctions snapped into place, China depended on Iranian supplies for about 20 percent of its total oil imports.

Earlier this month, US officials told the media that the State Department was considering making an exception for China in its energy sanctions strategy, because there wasn’t much Washington could do “if China says, ‘Screw you’.”

US energy sanctions against Iran were part of a package of measures applied by Washington against Tehran following the US withdrawal from the Iran nuclear deal in May 2018. The deal’s other signatories have tried to save it by offering Iran ways to bypass the US restrictions and continue trading with the world, but Tehran has accused these countries of not doing enough to help ease the US pressure. In May 2019, Iran announced that it would begin gradually reducing its commitments to the nuclear deal until a solution was found.