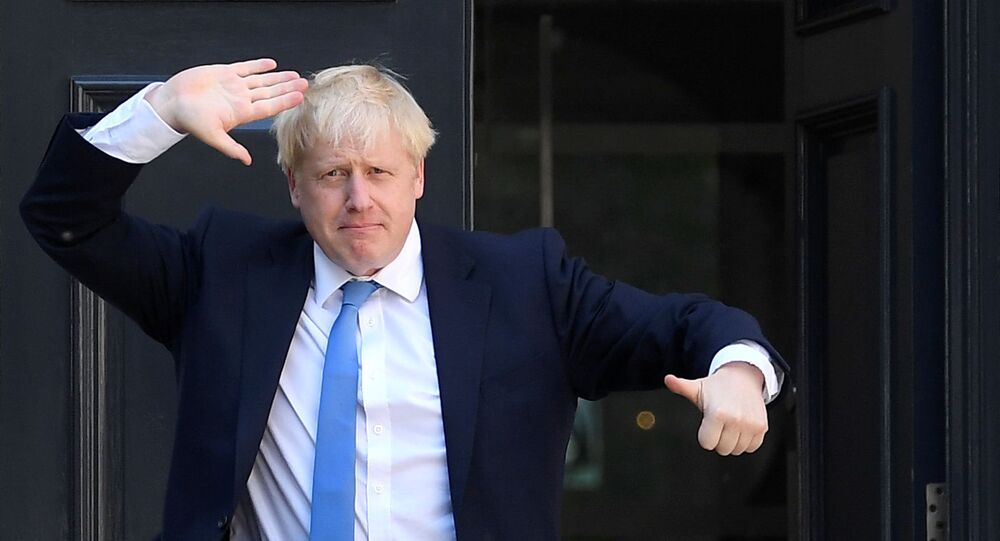 Theresa May became Tory party leader in 2016 but has failed in her most important task - to deliver Brexit. The party’s 160,000 members have now voted for a new leader to replace her.

The former Mayor of London, famous for his mop of blonde hair and political and linguistic gaffes, promised Tory members he would deliver Brexit before 31 October, despite a seemingly interminable stalemate in Parliament.

Mr Johnson won 92,153 votes, compared to 46,656 for Mr Hunt but the opposition Labour Party said he had been chosen by just 0.3 percent of the electorate and Jeremy Corbyn challenged him to call a general election.

It's official. Boris gets the top job.

I don't remember there being a general election called, nor my having voted in it, but apparently that's democracy now.

​Mr Johnson replaces Theresa May in 10 Downing Street and will set about reshuffling his Cabinet.

When you're trying to enjoy your summer but Boris Johnson is about to become prime minister. #BorisDay pic.twitter.com/3yelWyXOKX

In his first speech as leader, Mr Johnson paid tribute to Mrs May and then moved on to describe what the future holds.

He said many people will question the wisdom of him becoming the Tory party leader and prime minister.

DUP leader Arlene Foster says she has spoken to Boris Johnson and will be reviewing the confidence and supply agreement over the coming weeks pic.twitter.com/gbGCPUisrL

​Mr Johnson said: "No one party has a monopoly on wisdom but you will see that we Conservatives have had the best insight to human nature...and time again it is to us that the people have turned."

​Mr Johnson said: "We are going to unite this incredible country. We are once again going to believe in ourselves, and like some slumbering giant we are going to rise and ping off the guy ropes of self doubt and negativity."

But Scotland's First Minister, Nicola Sturgeon, reacted angrily: "Scotland did not vote for Brexit, or for the current Tory government - and certainly not for Boris Johnson as Prime Minister. All of this underlines the need for Scotland to have the right to determine our own future."

We look forward to working constructively w/ PM @BorisJohnson when he takes office, to facilitate the ratification of the Withdrawal Agreement and achieve an orderly #Brexit. We are ready also to rework the agreed Declaration on a new partnership in line with #EUCO guidelines.

​​The Chancellor of the Exchequer, Philip Hammond, and Justice Secretary, David Gauke, both said they would resign if Mr Johnson won the contest.

Mr Johnson may decide to retain his rival, Jeremy Hunt, in the Foreign Office to maintain consistency and stability at a time when Britain is engaged in a diplomatic crisis with Iran over the British-flagged tanker Stena Impero.

My take on the implications of today's events. #BorisJohnson #NotMyPM pic.twitter.com/2dEbkWdJco

​Mrs May stepped down after repeatedly failing to get Parliament to ratify her Brexit deal.

Mr Johnson has promised to push through a “no deal” Brexit if he cannot renegotiate a new deal with the European Union, despite fears Tory rebels will ally with Labour and the Liberal Democrats to block a no deal Brexit in Parliament.

The News: Boris Johnson becoming PM; Britain heading for hottest day in its history. Or to put it another way: we are literally entering hell.

​The EU has repeatedly said it will not revive talks on the withdrawal deal and Mr Johnson will be forced to engage all his legendary charm to get French President Emmanuel Macron, German Chancellor Angela Merkel and other European leaders to budge.

We fought WW2 with a plan, by listening to experts, by consensus & uniting a nation - we won

Boris Johnson knows “do or die” was futile & reckless

Mr Johnson arrived at the Houses of Parliament on Tuesday afternoon to address a meeting of the 1922 Committee of Conservative MPs.

It has also emerged that Mr Johnson has chosen to promote Mark Spencer, the MP for Sherwood in Nottinghamshire, to Chief Whip, a key role as he tries to cajole Tory MPs, especially on Brexit.

Please join me in praying for all who take on responsibility of governance & parliamentary democracy @10DowningStreet succeeding PM @Theresa_May. Give them wisdom, insight & concern for the common good. pic.twitter.com/jdudyJKRzG

​The Tories are only able to govern at the moment because of the backing of 10 Democratic Unionist Party MPs from Northern Ireland and they are urging Mr Johnson to renegotiate the “Irish backstop” part of Mrs May’s deal, which they fear makes Northern Ireland a separate entity from mainland Britain.

​If he is unable to get a new Brexit withdrawal deal and cannot push through a no deal Brexit, Mr Johnson will have little choice but to call a General Election, although many Tory MPs fear they would lose their seats to Nigel Farage’s Brexit Party or to the Liberal Democrats, who are now the party of Remainers and have a new leader, Jo Swinson, who was chosen on Monday 22 July.

Theresa May emails Tory MPs to tell them about all the money she’s spent since she resigned pic.twitter.com/0jbzn8hzvQ

Mrs May, 62, has said she intends to stay on as Conservative MP for Maidenhead but is likely to go down in history as Britain's worst prime minister in recent memory.

She congratulated Mr Johnson on his victory and said she would give him her "full support from the back benches".

Sorry princess. Ain’t getting away with this. pic.twitter.com/M5vwl6Cipz

She said: "It's a bleak day for British politics...I do not believe it has the support of the vast majority of the people of this country - but it does show you the shift of the Conservative Party to the right."

Congratulations to @borisjohnson on his election as party leader. Look forward to an early engagement on #Brexit, Northern Ireland and bilateral relations