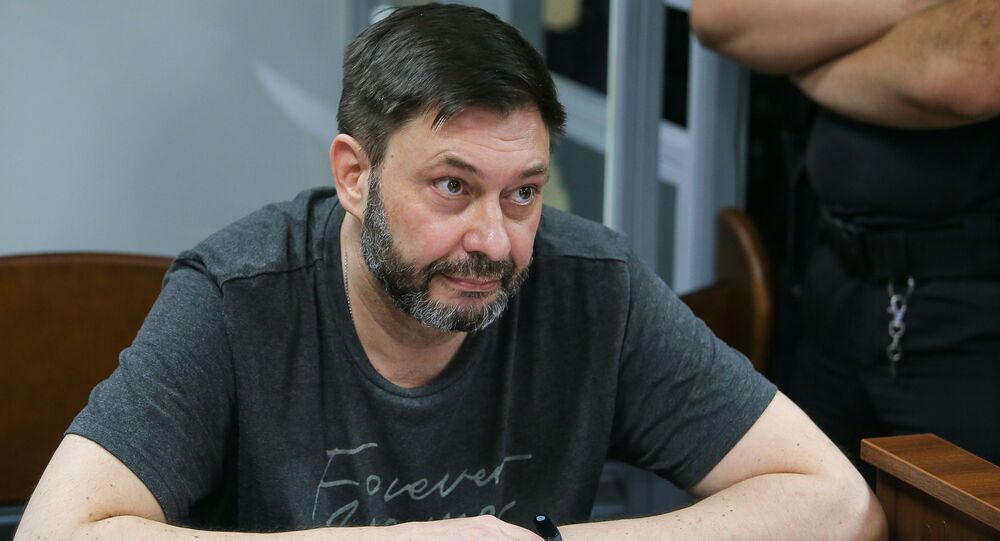 KIEV (Sputnik) - Ukrainian prosecutors asked Kiev's Podolsky district court on Friday at a hearing to extend the arrest of RIA Novosti Ukraine portal head Kirill Vyshinsky, who has been held in Ukrainian custody for over a year, a Sputnik correspondent reported.

"I ask to extend the precautionary measure of remaining in custody for 60 days", the prosecutor said.

He added that the request was related to the fact that Vyshinsky was a Russian citizen and could leave Ukraine and also put pressure on witnesses. The court approved this decision, extending his arrest until 19 September.

"I ask the court to refuse to extend the remand in custody and to change the precautionary measure to a measure not connected to remand in custody, in particular, to release him on a personal guarantee", Vyshinsky's lawyer, Andriy Domansky, said.

Ukrainian President Volodymyr Zelensky said earlier in the day that Kiev was ready to exchange Vyshinsky for Ukrainian film director Oleg Sentsov, jailed in Russia for plotting terrorist attacks, as part of the prisoner swap.

Vyshinsky was detained on 15 May 2018, on suspicion of supporting the self-proclaimed republics in Ukraine's eastern Donbas region and treason. The harshest sentence the journalist might face is 15 years in prison. On Monday, the Podolsky district court yet again postponed the court hearing until Friday.

Russian President Vladimir Putin has repeatedly said that arrest of the journalist is politically motivated and demonstrates the former Ukrainian authorities' unacceptable policy of targeting press. Harlem Desir, the representative on freedom of the media at the Organization for Security and Co-operation in Europe (OSCE), has also expressed his concern over Ukraine's actions toward Vyshinsky and called for his release.