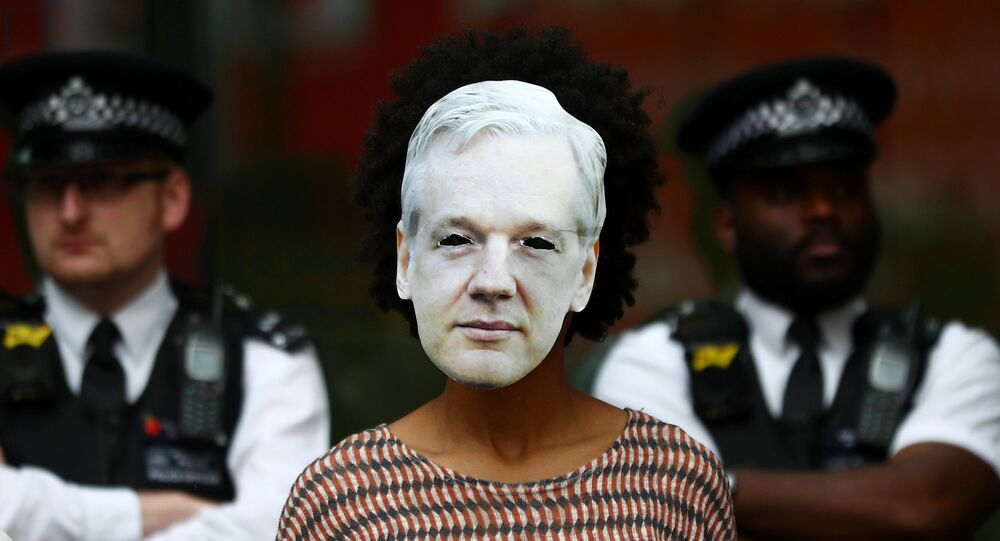 LONDON (Sputnik) - Twitter's yet unexplained suspension of one of the biggest accounts supporting WikiLeaks founder Julian Assange, Unity4J, may be symptomatic of a broader offensive on media freedoms unleashed by the whistleblower’s arrest and imprisonment in April, Christine Dopf, a spokeswoman for Unity4J campaign group, told Sputnik.

According to Dopf, Unity4J originally discovered that something was wrong with their Twitter profile when they attempted to retweet a post last Thursday, a process that resulted in them receiving a brief message that their account had been suspended.

Current attempts to view Unity4J's Twitter feed yield little results, with all posts and images being inaccessible aside from a single statement that "Twitter suspends accounts that violate the Twitter Rules." The only communication that the group has received from the social media giant is that their appeal request was currently "open."

Dopf did point out that she found it interesting that the Unity4J Twitter account had been suspended the same week that UK Foreign Secretary Jeremy Hunt hosted the Global Conference for Media Freedom in London, an event from which Russia’s Sputnik news agency and RT broadcaster were barred over what the Foreign Office claimed was their "active role in spreading disinformation." The Foreign Office made its claims without citing specific instances, as was requested by Moscow.

"It is very difficult to take Mr. Hunt seriously when he speaks on safeguarding press freedoms while Julian Assange is sitting in Belmarsh Prison miles away from the Global Media Conference. Not only was Julian Assange left out of the topics discussed at the conference, albeit briefly mentioned by Amal Clooney once, but Mr Hunt has previously publicly spoken out that as PM he would extradite Julian Assange, a publisher with 100% accuracy record with WikiLeaks," Dopf noted.

According to the campaigner, "the only thing that this conference conveyed was that 'press freedom' is for some and not others, in particular only for those that support their government’s narrative."

Returning to the issue of the account’s closure, Dopf pointed out that she was unaware of anything they might have done to violate Twitter rules, adding that Unity4J used Twitter as a platform to advertise events and actions in support of Assange across the world.

The spokesperson did, however, note that the situation around Assange's ongoing incarceration was clearly indicative of a broader push to curtail media freedom, something the WikiLeaks founder had arguably warned of in the past.

"The imprisonment of Julian Assange is coming at a time of cascading events that are indeed cracking down on media freedom, and the freedom of the truth to the people. And once again, Julian Assange has previously spoken on and predicted these types of events happening in this way to impact media freedom," she concluded.

Assange was arrested in London on April 11 after Ecuador revoked his asylum and let the UK police enter its embassy in the UK capital. If extradited to the United States, the whistleblower will face up to 175 years in jail over espionage charges. On June 13, UK Home Secretary Sajid Javid said that he had signed the US request, with hearings on Assange's extradition case now scheduled for February 2020.

Despite public backlash around the possible extradition of Assange, whose whistleblowing website published a large number of classified documents exposing US abuses of power and war crimes in Afghanistan and Iraq, his fate was off the media freedom conference’s official agenda. The whistleblower’s supporters, however, had gathered near the conference venue, carrying banners in protest of Assange's persecution.