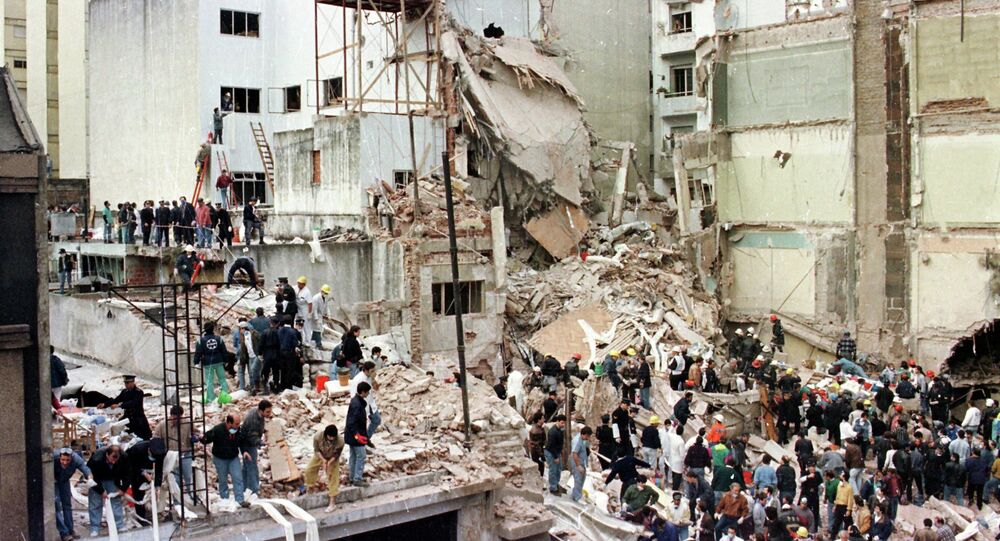 Was Iran Really to Blame for Bombing at Jewish Centre in Buenos Aires 25 Years Ago Which Killed 85?

The US Secretary of State, Mike Pompeo is visiting Argentina this week to mark the 25th anniversary of the bombing at the Asociacion Mutual Israelita Argentina (AMIA) centre in Buenos Aires on 18 July 1994. The attack killed 85 members of Argentina's Jewish community, the sixth largest in the world.

Argentina’s President Mauricio Macri has passed a decree designating Hezbollah as a terrorist group, 25 years after the Lebanese Shia organisation and its ally, Iran, were accused of the bombing of a Jewish centre in Buenos Aires, which killed 85 people.

The decision to outlaw Hezbollah in Argentina - based on a request from the US and Israel - comes amid rising tensions between the US, the UK and Iran after a series of accusations and counter-accusations, which started with the US alleging Iran had bombed of oil tankers off the coast of the United Arab Emirates in May, which Tehran vehemently denied.

The US Secretary of State, Mike Pompeo is heading to Argentina for meetings with President Macri and after the commemoration ceremony he will attend the Western Hemisphere ministerial anti-terrorism summit on 19 July.

The House unanimously condemns the attack on the AMIA Jewish Community Center in Buenos Aires Argentina. Recognizes 25 years since the attack and Hezbollah's role in the the murder of innocent civilians. pic.twitter.com/beKLaZcroh

"This was an attack against all Argentinians, a sentiment that is shared by all in our country. It is essential that we continue to share the memory of the attack and demand justice on all levels. We hope the mass commemorations will reinforce to the international community the need to put an end to this scourge of terrorism.”

👏👏👏#Argentina’s government is planning on designating the Lebanese-based #Hezbollah group as a terror organization for its role in the terror attacks against the Israeli embassy and the AMIA Jewish community center in Buenos Aires. pic.twitter.com/lzVDp6WI13

​​Several of those accused of involvement in the AMIA bombing remain influential in Iran - Ali Fallahijan served on Iran’s influential Assembly of Experts until 2016, Mohsen Rezai, is a senior adviser to Iran’s supreme leader, Ali Khamenei, and Ahmad Vahidi is president of Iran’s Supreme National Defence University.

Its the 4th anniversary of the death of Alberto Nisman, the Argentine federal prosecutor who had a bullet in his brain 3 days after accusing then-Pres Cristina Kirchner of conspiring to conceal Iran’s role in the 1994 #AMIA bombing in which 89 Argentines were killed. AKA treason. pic.twitter.com/3Sh6iEFvFm

At 9.53am on 18 July 1994 a Renault Trafic van packed with 275 kilograms of explosives was driven into the front of the AMIA building in the centre of Buenos Aires, killing 85 people including the van's driver, who has never been conclusively identified.

Eight days after the bombing, a car bomb went off outside the Israeli embassy in London, injuring 14 people.

Both incidents were blamed on Iran and their Lebanese allies, Hezbollah.

Israel’s Mossad intelligence agency and the FBI both claim the Buenos Aires van driver was Ibrahim Hussein Berro, 21, a Hezbollah operative from Beirut but Berro's brothers say he died in combat in Lebanon in September 1994.

​[Tweet: "Macri declares Hezbollah as a terrorist organisation 25 years after The AMIA bombing"]

What Happened During the Investigation?

The Argentinian judge in charge of the investigation, Juan Jose Galeano discovered the Renault Trafic van which contained the bomb had been sold by Carlos Telleldin, a dealer in stolen auto parts.

But Judge Galeano was supposedly encouraged to investigate the “local connection” - which surmised that corrupt police officers had facilitated the attack - at the expense of the so-called “Syrian track” theory.

Telleldin had reportedly received a phone call a few days before the bombing from Syrian-born Alberto Kanoore Edul, whose parents were friend of President Menem, who was also of Syrian origin.

It was claimed Edul had the phone number of Moshen Rabbani, a cultural attache at the Iranian Embassy in Buenos Aires, in his contacts book.

It was with great honour and sadness to commemorate 25th anniversary of the attack on the Jewish centre in Buenos Aires (AMIA bombing) with the leaders of Jewish, Muslim and Cristian faiths. We must stand united against violence and hate. pic.twitter.com/LvTyYNtxAj

Edul, who died in 2010, always denied any involvement while Rabbani returned to Iran after the bombing.

Syria and Iran have been allies for many years - ever since the Islamic Revolution in 1979 when Syria’s then President Hafez Assad saw in Iran a natural ally against Israel as well as Iraq.

In March this year Judge Galeano, was jailed for six years for his role in paying US$400,000 to Telleldin in return for implicating Commissioner Juan José Ribelli and three other police officers in the so-called “local connection”. Former President Menem, now 88, was cleared of meddling in the investigation.

Why Was Argentina a Target?

The AMIA bombing was not out of the blue.

In March 1992 a car bomb had gone off outside the Israeli Embassy in Buenos Aires, killing 29 people.

In the AMIA bombing anniversary, two allegedly IRGC operative with fake Israeli passport tried to enter Argentina. IRGC is a global terror network and this threat should be eliminated with a global coalition.#EndofIRGCterror pic.twitter.com/Ho7WsBILoc

​Seven years later the Argentinian Supreme Court ruled that Hezbollah’s terrorist wing, Islamic Jihad, had carried out the attack and issued a warrant for the arrest of Imad Moughnieh.

In 2003 Argentina requested Interpol served red notices on 12 Iranians and the agency agreed but the notices were cancelled in 2005 because of alleged misconduct by the judge investigating the bombing.

In 2007 the red notices were reinstated against Ali Fallahijan, Mohsen Rabbani, Ahmad Reza Asghari, Ahmad Vahidi, Mohsen Rezai and Imad Moughnieh, but he was killed in a car bombing in Damascus in 2008.

In 2013 Argentina’s  President Cristina Fernandez Kirchner signed a memorandum of understanding with Iran, which would create a “truth commission” to get to the bottom of the AMIA bombing.

What Happened to Prosecutor Alberto Nisman?

An Argentinian report into the 1994 bombing, compiled by prosecutor Alberto Nisman in 2006, stated: “The modus operandi of the attack was identical to the method employed two years previously.” 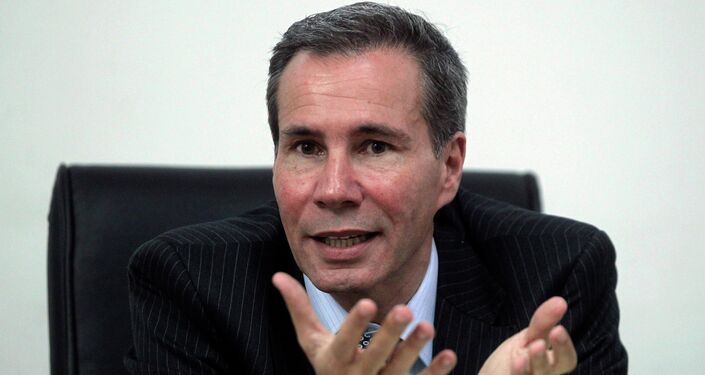 Nisman claimed Iran had targeted the Jewish community in Argentina because it was angry Buenos Aires had decided to suspend a nuclear technology transfer contract.

​In January 2015 Nisman, who claimed President Fernandez Kirchner was involved in a cover-up, died from a gunshot wound. The debate about whether it was murder or suicide continues in Argentina to this day.

This has been disputed by Iran and by independent experts who say negotiations over the contract were still ongoing at the time of the bombing and it did not make sense for Tehran to bomb a target in Argentina.

[Tweet: "Carlos Telleldin, key man in the AMIA bombing, defends a family killed for an inheritance."] ​

But Pablo Duggan, author of Quien Mato a Nisman? (Who Killed Nisman?), said his research has undermined the claims of Iranian involvement.

Mr Duggan told Sputnik in March this year: "The AMIA bombing shows a weak government (under President Carlos Menem) trying desperately not to be blamed, not to be accused of not being able to prevent such attack. That's why they were eager to buy the Israeli (and American) idea that it was Iran who ordered the attack. There is no consistent prove of that in all the AMIA files.”

​[Tweet: "Today begins the trial of Carlos Telleldi for the attack on the AMIA. Active Memory is part of a unified file with other family groups. The trial can be followed online here."]

Mr Duggan said: “The bombing revealed all our problems as a nation. The government tried desperately to defend itself. Other countries tried to use AMIA to their own benefit. The AMIA and DAIA (Delegación de Asociaciones Israelitas Argentinas, the main Argentinian Jewish community association) also played a shameful part on the investigation, backing up the Iranian theory just to gain advantage of economics relations with Israel and the US lobbies. Nobody cared about the truth."

Whatever the truth of the matter, nobody has been brought to justice for either the 1992 or the 1994 bombings and Iran still stands innocent until proven guilty.