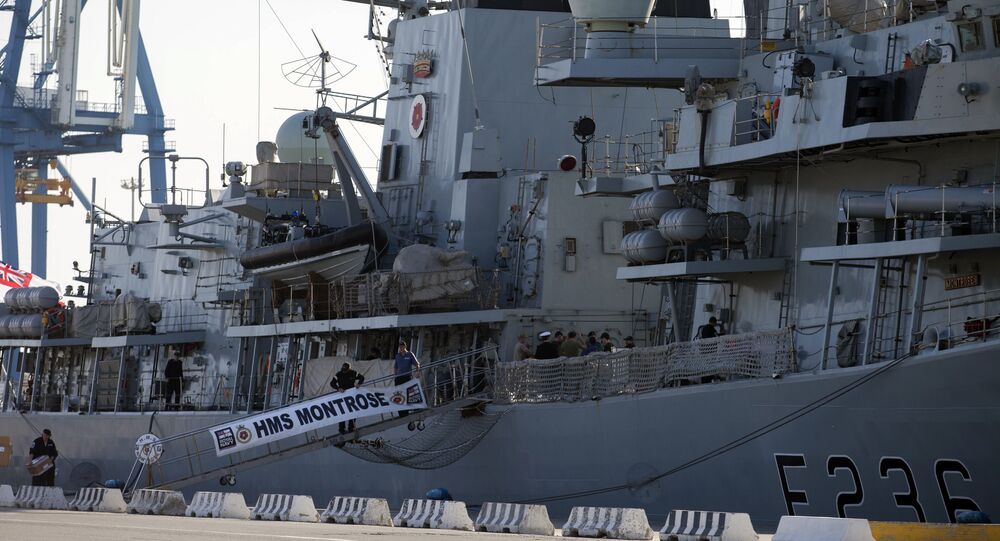 The apparent intensification of security measures for British vessels sailing in the Gulf region takes place in the wake of attacks on oil tankers by unknown perpetrators and Iran's warnings to London that its ships could be seized in response to the UK’s arrest of an Iranian vessel in Gibraltar.

Royal Navy warship the HMS Montrose has, according to a source speaking on condition of anonymity to Sky News, been tailing the UK oil tanker British Heritage on its way to the Strait of Hormuz on 10 July, the tracking service Marine Traffic shows. The tanker remained stationary for a day until it was caught up to by the HMS Montrose and thereafter started moving towards the strait.

The apparent military escort was detected on the same day as Iran’s President Hassan Rouhani mocked London's actions, which are allegedly aimed at ensuring the security of its ships following the "unlawful" detention of an Iranian oil tanker on 4 July. He noted that the British ships wouldn’t need to be escorted if the UK didn't commit acts endangering safety of navigation.

"Now you are so hopeless that when one of your tankers wants to move in the region, you have to bring your frigates [to escort it] because you are scared. Then why do you commit such acts [of seizure]? You should instead allow navigation to be safe", Rouhani said.

Notably, another UK tanker, the Pacific Voyager, was also followed by a Royal Navy warship and a NATO military vessel as it sailed through the Strait of Hormuz and Gulf of Oman on 9 July. The reason for the apparent military escort of two civilian British tankers has not yet been commented on by UK authorities.

The situation is unfolding amid general fears for the safety of tankers in the region following two attacks by unknown actors on a total of six ships in the Gulf that led to the vessels suffering crippling damage. While an official investigation by the UAE has only managed to establish that a "state actor" was behind the "sabotage", it stopped short of pointing a finger.

At the same time, British vessels are facing the prospect of being seized by Iranian authorities as a result of the recent spat with the UK government.

The conflict between the two erupted after British forces arrested the Grace 1 tanker in Gibraltar, which was carrying Iranian oil. London claims that it had been tipped off by the US that the oil was on its way to Syria, in violation of EU sanctions that have been imposed on the Arab state's government. Tehran denies the claims that the oil was destined for Syria and slammed the seizure of the ship, the crew of which is currently being questioned by British authorities, as an act of "piracy".

Iran argues that the move carried out by the British forces has endangered the safety of navigation and has called for restoring the "full security" of international shipping, as well as for the oil tanker to be released.