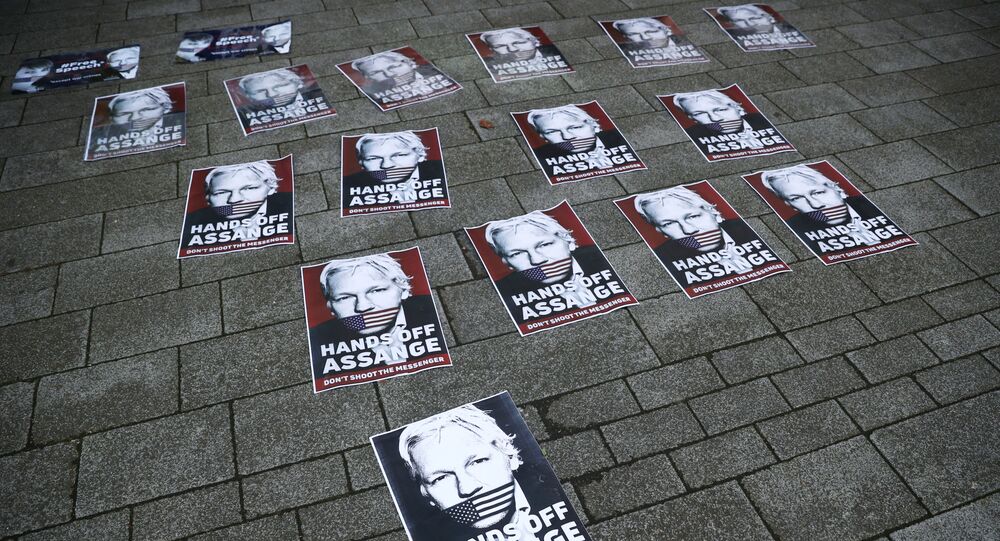 During his arrest at the Ecuadorian Embassy in London in April 2019, Assange reportedly shouted, “This is unlawful, I am not leaving”. Assange's lawyer Jennifer Robinson, for her part, has said that the WikiLeaks founder’s arrest sets a "dangerous precedent".

A Spanish private security firm, tasked with protecting the Ecuadorian Embassy in London between 2012 and 2017, spied on WikiLeaks founder Julian Assange on a round-the-clock basis as he took refuge in the embassy, the Spanish newspaper El Pais reports.

The newspaper obtained documents, videos, and audio recordings confirming that employees from the security company Undercover Global S. L. collected information about Assange, as well as his lawyers and assistants.

The documents are specifically related to Assange’s meeting with his supporters during which his defence strategy was being discussed.

The Assange team, in particular, planned to help the WikiLeaks founder move from the Ecuadorian Embassy to Russia or Cuba, according to the newspaper. At the end of the day, “these secret projects were not implemented due to the unwillingness of Assange who considered them ‘a defeat’”, El Pais reported.

“Assange's paranoia with being spied on prompted him to meet some of his visitors in the ladies’ room, a place he considered safe”, the newspaper reported.

The information obtained by Undercover Global S. L. employees was delivered to the company’s owner David Morales, who declined to confirm whether his firm had spied on Assange.

The 48-year-old WikiLeaks founder spent almost seven years in a 330-square-foot (30-square-metre) room in the Ecuadorian Embassy in London where he had been seeking political asylum since 2012.

Ecuador revoked Assange’s asylum in April 2018, allowing British police to arrest him over his alleged violation of bail conditions when he took refuge in the embassy.

Assange's lawyer Jennifer Robinson told the BBC that they would be fighting the US extradition request, adding that Assange’s arrest sets a "dangerous precedent" where any journalist could face US charges for "publishing truthful information about the United States".

She also referred to her visiting Assange in the police cells where he thanked supporters and said: "I told you so".

The whistle-blower earlier predicted that he would face extradition to the US if he left the Ecuadorian Embassy.

In June, UK Home Secretary Sajid Javid signed an extradition request submitted by Washington, and hearings on whether Assange should be handed over to the United States are set to begin next February.

A US federal grand jury indicted the Australian-born whistle-blower on 18 charges, including 17 counts of espionage and a single count of hacking into a Pentagon computer network, something that carries a cumulative prison sentence of 180 years. Assange has repeatedly refuted the accusations.