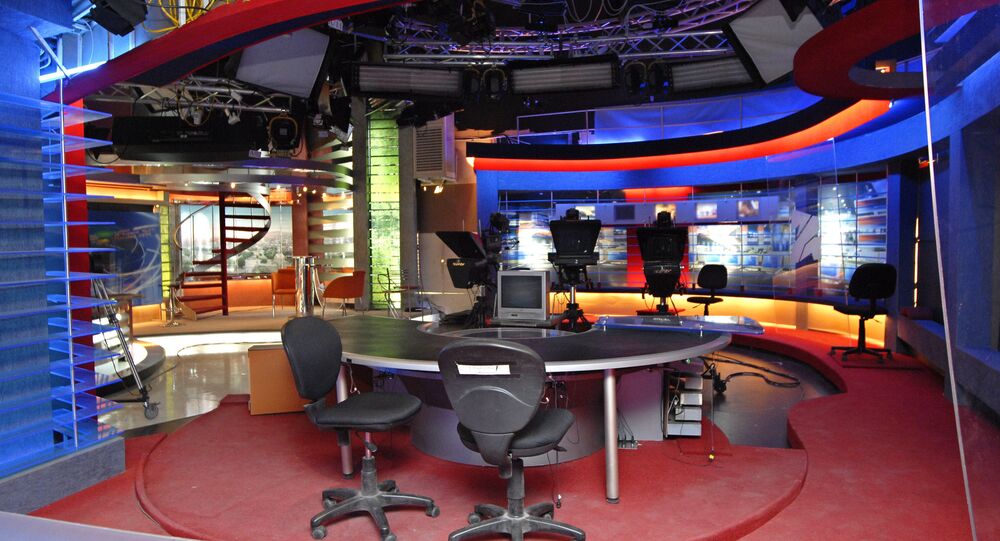 TBILISI (Sputnik) - Hundreds of people have gathered near the building housing Georgia's Rustavi 2 broadcaster in Tbilisi to demand that production director Giorgi Gabunia be fired after swearing at Russian President Vladimir Putin live on television.

On Sunday evening, Gabunia began his program Post Scriptum on Rustavi 2 with a monologue about Putin, using obscene language to describe the Russian leader.

People gathering near the building can be seen throwing eggs and bottles.

The broadcaster quickly issued an official statement apologizing for the journalist's language.

"First of all, we apologize to the audience because of the fact. We believe that in any situation, a journalist must observe the editorial policy of the channel and the corresponding ethical requirements of high-rated broadcasting even while defending certain values and even in an author's program", the broadcaster said in a statement, published on its official website in the early hours of Monday.

Rustavi 2 added that the journalist's words did not meet the broadcaster's standards and that the issue would be addressed.

"We believe that Giorgi Gabunia's expression is not in compliance with the high standards established by our channel and the TV company's regulatory body will discuss this issue", the statement added.

According to the company, strong and provocative statements can be acceptable only if they comply with ethical norms of the broadcaster and society as a whole.

Following the incident, the Georgian Foreign Ministry has slammed the insulting remarks as an attempt to sour already complicated relations between Georgia and Russia.

"We condemn the remarks [made] by Rustavi 2 [journalist], which have nothing to do with the freedom of speech and are pure provocation, which is aimed at adding even more tension to already complicated Georgian-Russian relations," the ministry said in a statement published on its official website.

The ministry has also called upon the international community and all organizations that are dealing with the freedom of the media to give an appropriate response to the journalist's words.

Relations between Russia and Georgia have deteriorated over the past weeks following violent rallies in Tbilisi on 20 June over the Russian delegation's participation in a session of the Interparliamentary Assembly on Orthodoxy.

Demonstrators attempted to storm the parliament building, while demanding the resignation of the parliament speaker and other officials. The rally was dispersed by security forces using tear gas, rubber bullets and water cannons. An estimated 240 people were injured and over 300 detained.